Share
Tweet
Share
Pins
Share
Like
After a week of moving from city to city across Europe for work it was good to return home. And by home I of course mean The Dripping Pan. I am known for my amazing ability to find myself in a city for work when there is a game on. You could almost write a book of instances where this happened. In fact I actually have – The Football Tourist – coming to all bookstores on the 1st September, published by those lovely people at Ockley Books. 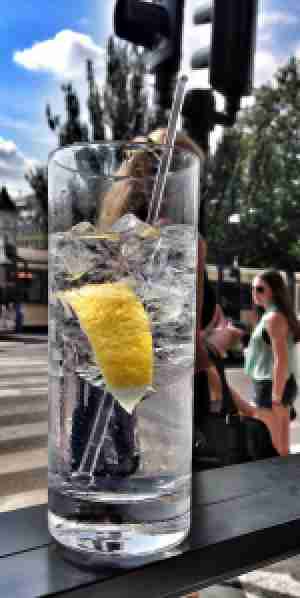 But enough of gratuitous plugs for my writing ability (The Football Tourist – “A bloody good read” – Mrs B Fuller). This week had been a write off in terms of great organisation. On Tuesday I was lapping up the sunshine in the Augustiner Keller, after a hard day’s graft in the Munich office just as IF Hammarby were christening their new stadium in Stockholm with a game against PSG. And then just twenty-four hours later I was in the Capital of Cool, whilst Bayern were taking on Barcelona in Munich. The football gods were not smiling. But I couldn’t really complain. An evening drinking some of the finest Bavarian beer, served by buxom dirndl-clad waitresses had been replaced by watching the Scandinavian blondes jumping in the water around the archipelago (always wanted to shoe-horn that word in) in the land of the almost-midnight sun. And then I return to good old Blighty just in time for Lewes’s Friday night extravaganza against Burgess Hill Town. 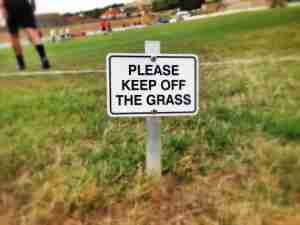 Non League fans can never be accused of being the most optimistic of people, and The Rooks fans have certainly endured their fair share of false dawns in the past few years. But this season, the “o” word has been whispered on the concrete steps of the Jungle. Two draws against local opposition were followed up with an impressive 3-1 win against Brighton & Hove Albion on Wednesday. Granted, it was their development XI. The concept of a Development XI is another new-fangled footballing buzzword. Back in the day a club would have a First XI and a Reserve team, possibly a youth squad. The Development squad sort of sits in between the reserves and the youth team with a fair smattering of players on trial from elsewhere. Basically it is a ruse to put out a team that if you then get beaten by a Non League side you can say , “Ah, yes, but it was our development side”.  Another development of crap modern football whilst the actual first team have jetted half-way around the world to play a game against a team from down the road (Arsenal v Man City in Helsinki next weekend anyone?). The switch to Friday night was perfect for me, with the wedding of the year in deepest, darkest Essex on Saturday. Dagenham Dan was getting hitched, timed to avoid the real football season, of course, although he could have at least had a 5pm service so that we could have got in a pre-season game earlier in the day. But I couldn’t complain after a week away. Feel-good Friday football was back on the agenda. This would be another opportunity to see how the squad was taking shape. Most of the Lewes fans who had seen the three games to date would have been impressed with the new additions. To me the presence of the Crabb brothers had been a real positive aspect. Not two, but three brothers, who happily played in the same side without any sibling rivalry. Few teams could boast three brothers in the same starting XI – Perhaps the Wallaces (Danny, Ray and Rod) played together in the same Southampton side once or twice but apart from that I cannot remember anyone else. 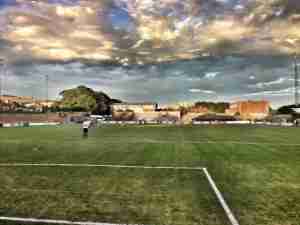 The sun was shining, the beer tasted good.  All that was left for me to do was to relax.  Oh yes, and do all the announcing.  Hmm, now here was the issue.  Beautiful sunshine gave way to a stunning sunset, which in itself was a distraction.  My glasses were 64 miles away at TBIR Towers.  The Rookmeister was absent and so not tweets to fall back on, and neither team had brought substitute board.  This was going to be a challenge, especially as 16 players had been named as substitutes. Lewes 0 Burgess Hill Town 1 – The Dripping Pan – Friday 26th July 2013 Fortunately for me the only goal of the game came in injury time and I had already positioned myself behind the dugouts thus seeing the scorer’s (Greg Luer) number.  But up until then I was relying on the better eyesight of the LLF to keep me informed.  Of course among all of the wit, banter, trivia questions (“What has smooth milk chocolate for your delight?”) and the clouds, we (OK, I) missed a couple of the substitutions, although none of the other 311 spectators seemed to mind as they were all trying to remember the marketing slogan for a Caramac bar (As smooth as chocolate, as tasty as toffee).  Such chocolate based trivia was started by Dave Lamb who, whilst eating a Bounty bar, suggested that the paradise hunters were simply lazy in eating chocolate bars they found on a beach rather than foraging for their own food.  If you haven’t guessed by now, it wasn’t a high-octane local derby full of goal-mouth action. In fact the visitors probably shaded the attacking intent, coming very close to an opening goal in the second half which took two attempts to head off the line.  Lewes had a great shout (well, the dozen of us on the Jungle shouted, although I refrained from switching the mic on to protest) when a Burgess Hill defender decided to catch the ball, hidden from view of the officials. 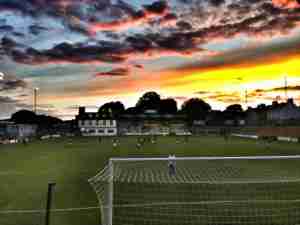 Of course we can fall back on the fact it was “only” a friendly, and the purpose was for the new management team to see how the squad was gelling.  I don’t think any of the Lewes fans who saw the game will complain at that.  It was a reality check from the game on Tuesday night but these things are expected pre-season.  I don’t think Lewes every had their strongest XI on the field at the same time and so you cannot judge the result in the same way you can the performance.  Three more games for the squad before they head North of the Thames in two weeks time for the opening game against AFC Hornchurch. The three highlights of the evening were Deaksy winning golden goal with a 90 minute ticket (it was tempting still to announce it as 89 minutes just to annoy him), Lolly making her debut in the Hatch which means she can now pay her own way at football (and pay me petrol money!) and the clouds.  Have I mentioned the clouds yet? No, well they were magnificent.
Share
Tweet
Share
Pins
Share
Like

Caution casual surfers.  This post has NOTHING to do with that trashy reality TV programme of the same name.  I have no interest in the fake tans, fake boobs, fake accents and the lives o...