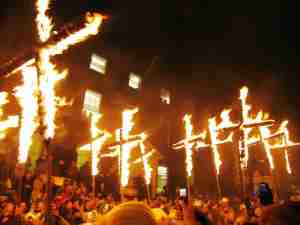 Lewes and Bonfires go together like Milton Keynes and roundabouts.  Bonfire festivities began when the discovery of the Gunpowder Plot was declared a national holiday. Celebrations in Lewes were not planned or carried out annually, but were more random events that were more like riots. They continued until they were banned by Oliver Cromwell during the Commonwealth. However, they were reintroduced when King Charles II returned, but still on a random basis. Interest waned by the end of the 18th century but in the 1820s large groups of Bonfire Boys started celebrating with fireworks and large bonfires. This got a bit two much during the 19th century with police from London regularly being drafted in to keep the peace on Bonfire night.  Societies sprang up, each having their own stripy jumper to the extent today that there are seven groups, each of whom plan their events months in advance.  Over 80,000 people descend on the town each year to join in with the celebrations. 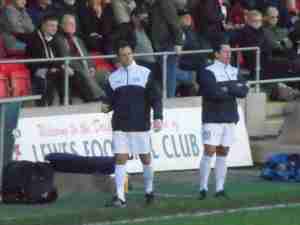 With no game at home next weekend, the match versus Dartford was deemed “Bonfire Special”, with an offer of half price admission to anyone coming in smugglers gear.  Add to this that it was the first chance for the Lewes crowd to see and meet the new Tim O’Shea/Neil Smith management duo as well as saying goodbye to Ibbo and the crowd was going to be a bumper one.  Dartford are no shrinking violets themselves away from home, taking hundreds wherever they go.  The smart money was on a four figure crowd. In the run up to the match, and in preparation for the firework celebrations, the town launched its own radio station – RocketFM. During the week each of the Lewes 6 took it in turns to host a show.  Come Thursday and it was the turn of Ben Ward and Patrick Marber to host two hours of mayhem.  It was like a party in your living room with special guests, Ibbo, Lord Plumpton, James Boyes, Danny Last and myself.  The focus of our attention was trying to find 10 clubs from 10 different countries who shared the same red and black striped shirts* – classic radio as I am sure you can imagine. 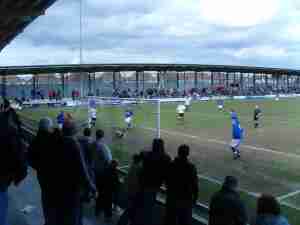 Dartford hold some fond memories for me, growing up literally down the road from their old Watling Street ground.  They had hit rock bottom, dusted themselves down and simply got on with things, climbing slowly but impressively up the leagues, winning honours such as last season’s Rymans Premier League along the way. This season, despite the attentions of their old rivals Ebbsfleet United their form has been patchy.  Unbeaten at home but without a win away had seen them drop too close to their liking to the bottom three, but the one thing the Darts have is faith in manager Tony Burman who has been in charge for over five years and guided them through thick and thin. We had another group of special guests.  Making their debuts at the Pan were Adam Lloyd (http://twitter.com/alloyd) and his son Harry and our founding members of the Finnish branch of the Lewes fan club, Ville Miettensen and his wife – after all who wouldn’t want to bring their loved ones halfway across Europe to watch a game.  Danny and myself had been guests in Adam’s five star box at Wembley earlier in the season for the Community Shield so it was only fair we returned the favour here. Lewes 1 Dartford 1 – The Dripping Pan – Saturday 30th October For 92 minutes this was a professional performance, continuing the hard work the team put in on Tuesday night at Bromley.  But then a stupid over reaction, a crap refereeing call and then a lapse of concentration saw all that hard work undone and the team and fans trooping off disappointed.  How far we have come in just a week that a point earnt is treated in such a way. 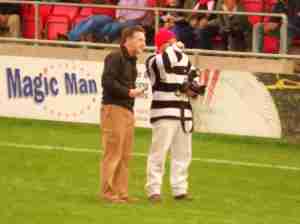 Rewind 94 minutes and the teams emerged to a rousing reception from the massed ranks of the various Bonfire Societies, accompanied by drums and bagpipes.  Tim O’Shea (officially renamed now as ToSH) had been busy in his three days in charge, bringing four new faces but it was two of the old guard who really shined.  When Rikki Banks was lured up the road by Eastbourne Borough in the close season to have a quieter life than he had last year between the sticks for Lewes, no one foresaw that Chris Winterton would be as capable in goal (as well as Banks’s Eastbourne conceding 38 goals in 17 games so far), growing in confidence as each game passed, and no one expected to see the kind of Ronaldo style showboating on the wing at the Dripping Pan, but that is exactly what Tom Murphy showed the crowd today. 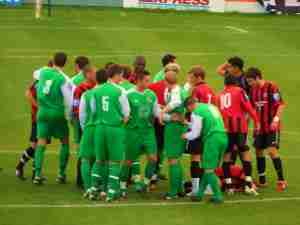 Both teams got stuck in early, and not for the first time the weak refereeing led to tempers fraying.  On the twenty minute mark Andy Pearson was floored by a leading arm from a Dartford player that was unwarranted and would have led to a more competent referee reaching for red instead of the yellow he gave.  Lewes gave as good as they got though and it was through this “never say die” attitude that led to the opening goal in the 40th minute.  A long ball over the top was chased down by Murphy and he managed to win a corner, which when swung it was not cleared and Paul Olima managed somehow to prod the ball home. 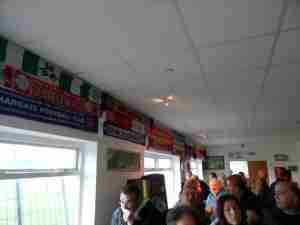 Half time saw the Rook Inn packed as usual, with many admiring a glance up at the new scarves that Danny and Dave had put up pre-match.  Young Adam had generously donated a Reading shirt on behalf of the little Berkshire club but even he could not be more impressed by the new names in the wall of fame – FC Siofek, Debrecen and AS Trencin are now immortalised forever (well, until we find some even more obscure ones).  One Harveys Blue later and we were back on the terrace, drums beating, bagpipes playing and the crowd urging the team forward, although the addition of a count down clock did give the impression Lewes were hanging on for a win from the 46th minute. With the atmosphere cranked up to 10, Lewes tried to kill off the game.  Tom Murphy literally dazzled the Bankside crowd with some hot shoe shuffles sending the young girls into a Cristiano Ronaldo frenzy.  One of the new members of ToSH’s management team, a slightly younger looking Ibbo took up a position on the Bank, giving more advice to the linesman than the team. 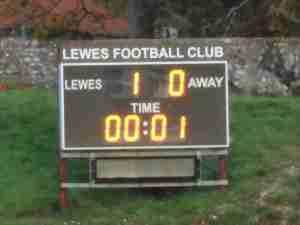 The new countdown clock kept on ticking.  15 minutes to go, Dartford corner, Winterton misses it but there is substitute Hutchinson to hook it clear.  8 minutes to go Barness is out of position, the Dartford full back goes marauding down the line, crosses the ball but there is no one there.  4 minutes to go Crellin loses the ball in midfield and a 3 v 2 attack is averted by some smart thinking from Beach.  1 minute to go Winterton takes two attempts at gathering the ball.  1 second to go….Crellin takes the ball into the Dartford half and is literally rugby tackled.  As he goes down he flicks his foot out David Beckham style, queue huge “gathering” in the centre circle and once again the referee proves he is not fit to officiate at this standard, by not only sending off Crellin and only booking the Dartford player, but giving the free kick to the away team.  Hang on – Crellin was rugby tackled – as far as I am aware this is not the oval ball game.  Tackles around the waist are illegal AND reversal of decisions cannot take place. Less than 45 seconds later and of course the ball is in the back of the Lewes net.  Concentration gone, they allow Dartford time in the box and an unchallenged shot nestles in the corner.  Bollocks.  Gutted.  Thanks ref. More photos can be seen on our Flickr stream here. * The ten clubs we came up with were AFC Bournemouth (England), St Mirren away (Scotland), Foggia (Italy), Spartak Trnava (Slovakia), IP Brommapojkarna (Sweden), Eintract Frankfurt (Germany), OGC Nice (France), Flamingo (Brazil), Bohemians (Ireland) and Khimki (Russia)
Share
Tweet
Share
Pins
Share
Like

Ferdinand: ‘No rest’ for defenders if United hadn’t sold those strikers

Former Manchester United defender Rio Ferdinand has revealed that he is still disappointed by the sales of Javier Hernandez and Danny Welbeck. Manager Luis Van Gaal sold Hernandez to Bay...