Share
Tweet
Share
Pins
Share
Like
It is rare that I go to a game and do not whip out my camera or my phone to record the action but yesterday as the referee blew the final whistle at The Dripping Pan I realised that I hadn’t taken one picture.  Not that there wasn’t any action on the pitch, but I had a guest with me.  Football Jo. 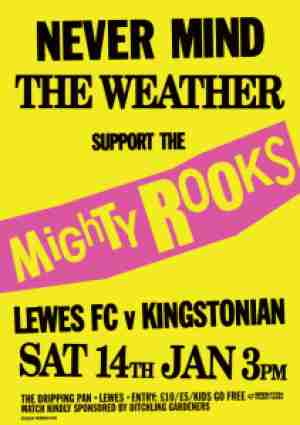 For those of you who are new to The Ball is Round you will have never come across Football Jo.  A few years ago she used to accompany me around the world to watch football.  But then she decided she really did need a boyfriend.  In the past she had a “love my football and love me” motto.  She has her own house, own car, own extensive porn collection and own teeth.  But some men couldn’t hack her commitment to the beautiful game.  So she compromised and stopped coming to strange overseas locations to watch bizarre games.  But it didn’t last and she rang me two weeks ago asking when she could come down to Lewes.  She was single again and thus she wanted to get back into football.  And what better place than The Dripping Pan. Today’s visitors were Kingstonain, complete with Martin Tyler as their assistant manager.  Yep, THAT Martin Tyler.  One can only speculate if he commentated on the game from the bench in the same style he does for Sky Sports. This was another Lewes game that was due to clash with Brighton.  Previous clashes had seen average gates of less than 600 and on a chilly afternoon a crowd of around that would be a good turn out. Lewes 1 Kingstonian 1 – The Dripping Pan – Saturday 14th January 2012 It was Horsham all over again.  Lewes ended up conceding a late equaliser in a game that they should have put to bed before half time.  At least this week we didn’t see any silly antics when Lewes were awarded a first half penalty as Paul Booth took one look at the bench and Simon Wormull’s nod said it all. 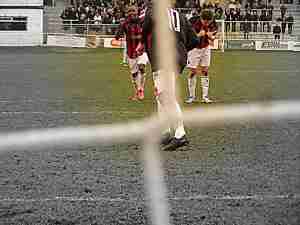 Lewes started in third gear, racing forward and using the width of Nanetti and Ciardini from the first few minutes. However, it was the visitors who had the best early chance when Duff blasted over from close range.  Lewes responded, Harding danced into the area and was brought down.  Harsh?  Well, compared to one that wasn’t given later on then I would say so.  Booth stepped up and made no mistake from the spot for his tenth goal of the season. Half way through the first period the linesman called the referee over.  A heated debate took place on the touchline with the Kingstonian bench, the result of which was the K’s manager was sent off.  In a day and age where any language seems to be acceptable on a football pitch it must have been something very bad for the red card. Half time and to feed my hunger I queued for a burger.  “Cheese burger please” I asked…”Chedder, Stilton or Burger Cheese?”  I can honestly say I have never been offered Stilton on a burger at a football game and it was tops.  If that is not enough to put another few hundred on the gate I don’t know what ever will. The second half saw Kingstonian come back into the game and test Rikki Banks.  Lewes had a great shout for a penalty when Nanetti was hauled down but the referee instead chose to book the Italian for diving.  A big let off for the visitors and they made The Rooks pay.  First Banks pulled off the “save of the season” from Simon Huckle.  But the 711 in the ground could feel a K’s goal coming and with ten minutes to go Duff skipped around the normally solid Hustwick and he beat Rikki Banks to give Kingstonian a deserved equaliser. A draw wasn’t the tonic we were looking for after a difficult week but results elsewhere still kept the Rooks in 4th place.  The cold wasn’t enough to keep away the fans and even Football Jo loved it, although that was perhaps she fell in lust with a certain little Italian with magic feet.  Here we go again.
Share
Tweet
Share
Pins
Share
Like

Nigel Henderson recants the moment that AFC Wimbledon completed their remarkable rise up the non league ladder. On Saturday evening, about 20 minutes before the world was due to end ac...