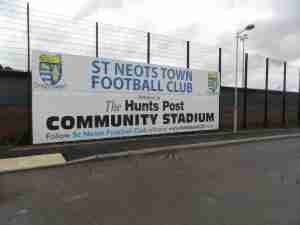 In April 2008 the football club held the official opening of their new ground on the Loves Farm site, located north of their previous Rowley Park ground. The stadium was funded and constructed by the site developers Gallagher Estates, who were building 1250 homes on the Loves Farm site, which included the existing football ground. Today whilst the building work on the estate is far from finished, the ground is an excellent example of what can be done on a small budget.  A well appointed clubhouse which offers the club a 7 day a week revenue stream, a nice main stand and covered terraces behind each goal.  It is perfect for a club who have aspirations of Blue Square Bet South/North football. 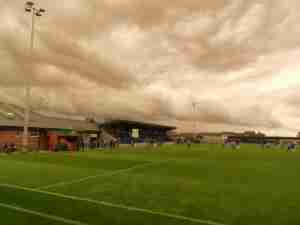 As you expect, the views are good from all around the ground.  A nice touch, similar to that at Carshalton is picnic tables next to the food bar (shed) where you can watch the game whilst eating your grub.  The bar has two big screen TV’s, a dart board and nice priced beer (less than £3 a pint). The far side of the pitch is as yet undeveloped but there is the potential to increase the capacity if required with a covered terrace. How to get to the Hunts Post Community Stadium If you are coming by train then be prepared for a hike and bring some wellies!  Whilst the ground is almost adjacent to the railway station it is a good 15 minute walk away as there is as yet no access to the estate from the east side of the railway line. So come out of station and turn left.  Head down the hill to mini roundabout.  Take a left under the bridge and follow this road until the entrance to the estate appears on your left.  Turn in here and follow the roads(!) up until you reach the ground, avoiding potholes, missing bits of pavement and the like.  I am sure over time it will be finished but that is out of the club’s hands. Apparently there is a 62 bus that runs from the town centre to the estate as well. By Car: From Town Centre take B1428 Cambridge Road. After going under railway bridge turn left at the first (new) roundabout into Damsell Rise. Follow the road which leads into Kester Way and the football ground. 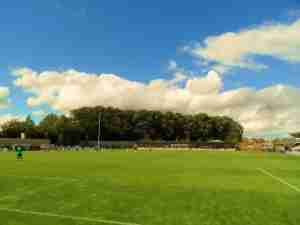 If you are coming from the east then you can also take the A428 from the A14 and then follow signs for the town centre.  You will then reach the Love Field Estate on your right. Please note that on matchdays parking spaces in the club’s main car park & overflow are limited and fill up quickly. It is currently possible to park in the surrounding rounds, and on matchdays the school car park is usual available. In addition on most matchdays the top gate is also open, which leads to the houses North of the football club site, and can be accessed via Priory Hill. Admission to the Hunts Post Community Stadium Pre-season it was £5 for adults and £3 for concessions but we believe it will be £8 and £5 come the start of the season. Our last visit – July 2011 This season it will be a headline writers dream with Steve King back in the hot seat at Lewes.  After his triumphant return to the club after a three year absence in the summer, he began to rebuild the squad.  The Lewes fans had been used to the revolving door during the ToSH era last season but this was more understandable as the Rooks became one of the favourites for promotion even before the fixtures were announced and a ball had been kicked in pre-season friendly anger. “Welcome to the King dome”, “SpanKING”, “King Konga”..we’ve seen them all before but that doesn’t mean we wont see them again this season. King had set the game up with St Neots at the end of last season when he was still with Farnborough and the Saints had been crowned United Counties League Champions. When he returned in his golden pumpkin to the Dripping Pan he simply put a call in to St Neots, and The Rooks first pre-season friendly was in the diary. 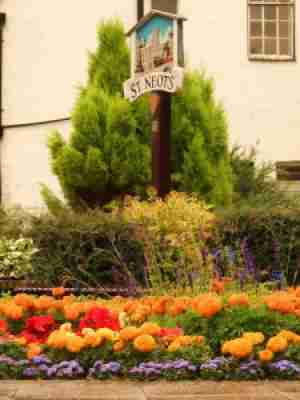 St Neots Town are no small time club anymore. The can count ex-West Ham and Northern Ireland midfielder Steve Lomas as an ex-manager (back in 2010), with another ex-Hammer Michael Hughes as his assistant.  Last season they also spent and almost unheard of five figure sum on former Aston Villa forward Stefan Moore.  And this season they have Gavin Strachen, son of Gordon, in the squad. And then there was the ground.  Twenty five years ago West Ham United were the visitors to Shortsands ground in a sell out friendly.  But then in 1987 the ground was sold to a housing developer, which forced the club to disband after the 1987-88 season. The Saints reformed in 1989-90 to play at a much lower level in the Huntingdonshire and District Football League. During 1992, the club signed a forty-year lease on a 4½ acre site (1.82 hectare) to the east of the town. The club committee worked hard to organise fund-raising and building work, and the Rowley Park ground took shape. The Saints were re-admitted to the United Counties League in 1994-95, winning the Division One title at the first attempt and earning promotion to the Premier Division. In April 2008 the football club held the official opening of their new ground on the Loves Farm site, located north of their previous Rowley Park ground. The stadium was funded and constructed by the site developers Gallagher Estates who also built a housing estate next door.  It would have been nice if they had actually finished essentials such as pavements and roads before they started playing here. And this is where James Boyes and I pulled into the car park after our two day road trip at the Supporters Direct conference in Chester with the rain pouring down.  After all this was the middle of Summer. 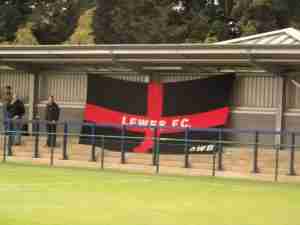 We wasn’t alone.  After a few months apart the Lewes Lunatic Fringe were back together.  Deaks, Danny, Dave, Terry, Jason with his huge flag and of course Patrick representing the board. We met in the official Lewes fanzone in the town (aka the Pig and Falcon). I was desperate for a win.  Not for King, the team, the owners or even the Rooks fans, but for me.  I made a bizarre pack with myself that after our home win versus eventual Blue Square Bet South champions Braintree Town on the 23rd March, I would not have my haircut until I saw us win again.  I missed the game versus Havant but fully expected three points from the Boreham Wood game.  Alas it was not to be and so nearly four months later I had developed a style that Gene Hunt in Ashes to Ashes would have been proud of.  Not much to ask to end my suffering was it. St Neots Town 2 Lewes 3 – Hunt Post Community Stadium – Saturday 16th July 2011 At 2.55pm when the Lewes team consisting of ten new players and Lewis Hamilton walked out of the tunnel the sharp intake of breath from the LLF could be heard all the way down the A1, M25, M23 and A27 in Lewes.  It wasn’t the plethora of new signings that caused the reaction more the AC Milan inspired home strip.  It was identical bar the sponsor logo on the front, Lewes favouring the Samuel’s Childrens Charity instead of an airline.  Whilst the Rossoneri may be in their training camp in the Piedmont mountains, the Rooks were preparing themselves for a stern test. 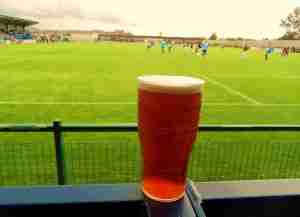 The starting eleven included a number of players that King had known and managed in the past few seasons including centre back Steve Robinson, midfielder Nic Ciardini and giant keeper Stuart Robinson.  As if the big man upstairs knew it was time for the football to start again, the rain stopped and the sunshine bathed the ground in warmth. The St Neots ground is smart, functional but in the middle of bloody nowhere.  Whilst the railway station is next door, the walk to the ground is a trek across an obstacle course that would have put the Krypton Factor contestants to task.  We grabbed a beer, went onto the terrace and knew we were back.  We are Lewes, we won’t be Druv. The first ten minutes saw the Rooks team trying to understand who did what, where and when.  It was disjointed and not pretty.  On thirteen minutes they gave away a silly free kick and from a very well worked set piece St Neots took the lead.  Ten minutes later it got worse.  Poor marking allowed the St Neots forwards to create space down the right and the ball was smashed home.  Cue collective embarrassed looks at the floor.  Danny Last tried to lighten the mood. “So what is that mark there on the edge of the pitch?” pointing to a small line just behind the touchline and near the junction with the penalty area. “That will be the ten yard dash.  It is so the referee can see if a player encroaches from a corner”. Came the reply. “Bollocks is it” said Mr Last and a furious debate about the merits of the information took hold.  Wikipedia couldn’t give an answer, but the unswerving insistence on its purpose, especially from Cynical Dave meant he had to concede. Our pontificating was interrupted when Nic Ciardini (or Jardini according to the team sheet) smashed the ball home after beating the full back. Goals always seem much better when they hit the underside of the bar and this was no exception.  Two one and all of a sudden the Rooks looked like a team.  The ball kept finding its way to Ciardni and he kept beating his marker and putting the ball into the area.  Things were looking up and we finished the half the stronger of the two. 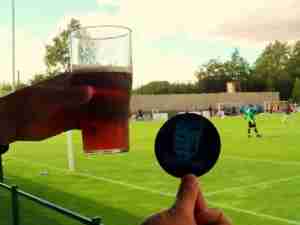 We adjourned to the bar whilst Danny went shopping.  He went to the club shed/tea bar and bought the last (ever apparently) cork-backed St Neots beer mat.  He felt guilty in the first half that his beer glass would make a nasty ring on the terrace crash barrier so he wanted to help. Despite a couple of substitutions at the start of the second half, Lewes kept their tempo up from the first half.  Players started finding their rhythm and started playing with more and more confidence.  Again the outlet seemed to be Ciardini who seemed to relish having the ball at his feet.  He created a couple of chances for Draycott and Malcolm before teeing up substitute Merchant whose shot from 25 yards stung the keepers hands and the ball fell to Draycott who tapped the ball home.  Lewes had pulled themselves back into a game for the first time since February when they had trailed 2-0 to Boreham Wood. 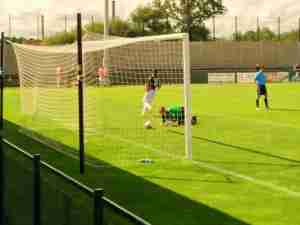 It was to get even better a few minutes later.  Ciardini paused, jinked passed his marker, got to the byline and then put a pinpoint cross onto the head of Draycott who scored his second.  The ten or so away fans could not believe what we were seeing.  Lewes not only scoring three goals, but never giving up.  This is a new era, a new team and a new attitude. So a win at last.  I could breathe a sigh of relief and have my haircut.  I hoped that my Sampson-esque powers would not be lost. Talk turned to next week’s outing to Worthing before the realisation of the trek back to the station across No Man’s Land.  We are Lewes, we wont be Druv. More pictures from the day can be found here.
Share
Tweet
Share
Pins
Share
Like

In the second week of December another football club in the non-leagues unfortunately bit the dust.  Kings Lynn FC, formerly of the Northern Premier League simply could not c...