Share
Tweet
Share
Pins
Share
Like
It started out with a miss How did it end up like this It was only a miss, it was only a miss At exactly 11am 258 days ago we boarded a train at Liverpool Street station, heading east to pastures new with hope in our hearts.  The new season was upon us and after a disappointing previous campaign we had rebuilt in the summer and quite fancied ourselves for a shout at the play offs.  Of course, putting my official hat on we were “confidently optimistic of an improvement on last season”, but as we know there are only four objectives any club really sets out to achieve every season. “Consolidation” – means avoid relegation but at least keep the interest of the fans up until Easter then we can slash the budget “Pushing on” – means we’ve increased the budget to what the management team wanted so they better reach the play offs “Challenging” – we’ve mortgaged ourselves to the hilt and sacrificed our first born for promotion and don’t want to think about not going up “Happy with our lot” – we really have no idea which of the three above apply 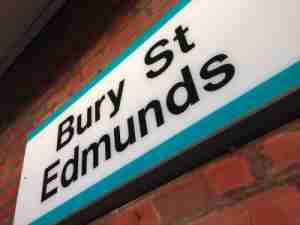 We wanted to “push on”. We increased the budget, we brought in two or three players that had other clubs and observers suggest we were dark horses in a league that would be dominated by the two big spenders in Maidstone United and Margate.  When Luke Blewden opened scoring on a dust bowl of a pitch at the Village Glass Stadium in Witham back on the opening day with twenty minutes to play, the Lewes Lunatic Fringe were in full voice.  But football is a fickle mistress. Five minutes later Witham equalised to snatch a point.  Five games later and we had two points from a possible fifteen. Five more weeks on and we had been dumped out of the FA Cup back at the Village Glass Stadium. Five months later and we felt we needed to change the management team to give us some fresh impetus. We looked for crumbs of comfort.  We had games in hand.  We seemed to be on the end of every poor refereeing decision dished out.  We had injuries to our key on the pitch leaders. Our much heralded, long overdue 20 goals-a-season striker suddenly developed an irrational fear of shooting.  Whilst we have the responsibility of governance of a football club owned by 1,000 plus people across the world, we are also first and foremost fans.  We see what everyone who stands on The Jungle sees or who travels up and down the rail networks as part of the Lewes Lunatic Fringe.  Sometimes it’s hard we represent the hopes, dreams and fears of that group.  We want to believe things will turn out “alright in the end”. Sometimes you need to take a step back to see the reality.  Despite what we are led to believe in the movies, there are no happy endings in life, especially in football.  We can look back at a dozen or more incidents in the season with the “what if?” question.  What if we hadn’t given the ball away so cheaply in injury time against Harrow a few weeks ago leading to them scoring? What if we had a competent referee in the home game against AFC Hornchurch who would admit he made a mistake in the lead up to their opening goal? What if Elliot hadn’t been sent off away to Canvey Island when we were in control of a 1-0 lead? What if is a game that any football fan can play for ever. 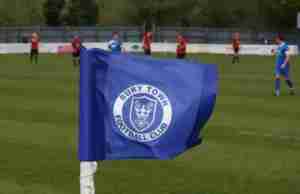 No one connected with the club expected our longest and last away journey of season to be so vital, even a few weeks ago.  Destiny is always in our hands for the most part of the season, and our recent run of poor results has coincided with two of the four “dead and buried” teams going on championship runs.  We imagined today’s visit to the picturesque Ram Meadow in Greene King country being a shorts and t-shirt day, looking forward to a decent drink and a mellow reflection on the season.  Instead we go dressed for wind, rain and 90 minutes of keeping one eye on results elsewhere. As an owner of Lewes Community Football Club I’m invested in the future of the team, both on and off the pitch.  However, as Chairman I have to be 100% invested in what happens today. If results don’t go our way will it be catastrophic in the long term for the club? Probably not, but it will sure hurt and I have to bear some of the responsibility for that.  As I mentioned earlier, sometimes being a fan can make you see things differently.  If we get what we need today the euphoria will be short-lived.  Yes, we did the short-term job, but what about our original goals for the season? We certainly haven’t progressed for a number of reasons that collectively aren’t any one persons fault.  As a member of the elected board of directors we all have to shoulder the blame and responsibility.  Time for reflection will come in due course. For those who have been Lewes followers for a few seasons will know the drill by now. Five years ago we were dead and buried in the Conference South with five games to go.  Somehow we managed to give ourselves a shot at survival on the final say, needing a win at Hampton and Richmond Borough.  Nearly 150 Lewes fans descended on the Beveree that day to see The Rooks grab a 2-1 win and survive.  Two years ago we needed at least a point as we trailed Cray Wanderers in injury time away to give ourselves hope of survival.  The scenes when Nathan Crabb equalised will long live in the memory of the hundred or so fans at Hayes Lane that night.  Few will remember the two games after that where we played for nothing more than a few more points for respectability. But back to today.  As our train passed the Village Glass Stadium on its way to Bury St Edmunds, via Ipswich, we raised a plastic cup of Jaipur to those halcyon days of summer and for one brief five minute spell where we saw a season full of 3 point away days, flowing football and an end of season promotion party. 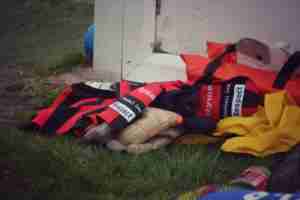 This was to be our last league visit to Bury Town for the foreseeable future.  Relegation had already been assured some weeks ago but instead of rolling over and sacking off for the rest of the season, they’ve started putting in some decent performances.  In fact, in the current form tables Bury rank higher than Dulwich Hamlet and Margate.  We certainly weren’t arriving expecting any favours.  We knew that 3 points was our prize. We congregated in the Old Cannon brewery, just a five minute stroll from the ground.  The mood was quietly confident. If it wasn’t for the need for three points this would be the best away day ever. The final pre-match thought as we entered the delightful Ram Meadow come from Lewes-born US firebrand Tom Paine, which adorns the home team dressing room at The Dripping Pan “The harder the conflict, the more glorious the triumph” Bury Town 0 Lewes 2 – Ram Meadow – Saturday 25th April 2015 With 5 minutes plus stoppages to go we heard the news that Peacehaven & Telscombe had lost 4-2 meaning our safety was assured.  Lewes had dominated the game, scoring twice and retaining possession for the best part of 85 minutes.  Rikki Banks could have joined us on the sideline for a pint from our hosts Beer festival and still kept a clean sheet.  Two goals made by Nicky Wheeler, scored by Elliott Romain and Henry Muggeridge saw the Rooks home.  The travelling fans basked in the Suffolk sunshine and celebrated with the players at the final whistle.  Game over, job done. 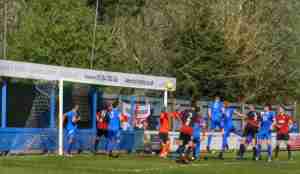 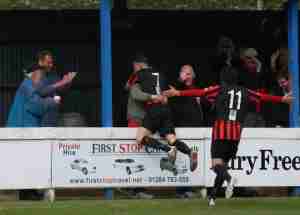 4:12 – Canvey Island 2 Wingate & Finchley 2 – What a 90 second period – Canvey on a roll, Peacehaven wobbling 4:17 – Peacehaven & Telscombe 2 Hampton & Richmond Borough 3 – What on earth is going on down there?  Peacehaven fall back into bottom four 4:17 – Canvey Island 3 Wingate & Finchley 2 – The reverse comeback at Canvey Island..Only Peacehaven in the group of relegation candidates now losing 4:27 – Tonbridge Angels 1 Dulwich Hamlet 2 – Worrying glances at what’s going on at Peacehaven from the Angels 4:39 – Peacehaven & Telscombe 2 Hampton & Richmond Borough 4 – All over bar the shouting as Peacehaven will have to score 3 times and hope that Bury or Wingate can muster two goals. 4:40 – Tonbridge Angels 2 Dulwich Hamlet 2 – Angels can party as it will take a miracle for them to go down 4:42 – VCD Athletic 1 Billericay Town 0 – VCD leave it late but that should put the final nail in the Peacehaven coffin 4:44 – VCD Athletic 2 Billericay Town 0 – And relax So final table looks like:- 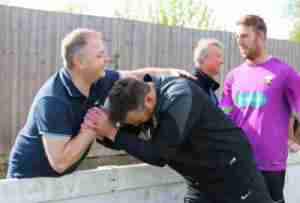 About the KT Stadium Croydon Athletic play at the Keith Tuckey Stadium in Thornton Heath. It is named after the Chairman of the club from its foundation in 1986 until his death in March ...