Welling up the table

Share
Tweet
Share
Pins
Share
Like
The debate about the status of the Conference Premier has been raging for many years.  Take a look at the league at the moment and you cannot fail to notice some very familiar names.  Cambridge United were once a few minutes away from the top-level of English football and after what seems like years in the Non-League, are now leading the pack in the Skrill Premier.  Not far behind them are fellow Football League exiles Grimsby Town, Luton Town, Kidderminster Harriers and Barnet.  All of these clubs could essentially slot straight back into the world of the SkyBet, or whatever it is called, League tomorrow, competing on and off the pitch. Take a look at the average attendances in the league so far this season and the best eleven supported teams are all ex-League teams.  In fact all of these apart from Halifax Town have a higher average attendance than Accrington Stanley, Dagenham & Redbridge and Morecambe (all of who were until recently, Non League sides).  But there are a couple of new names appearing towards the top of the table.  Alan Devonshire’s Braintree Town are punching well above their weight in 4th place, surviving on crowds of around a thousand.  Salisbury City and Nuneaton Town are new-boys in the league but both have relatively good catchment areas, free from the distractions of bigger sides. 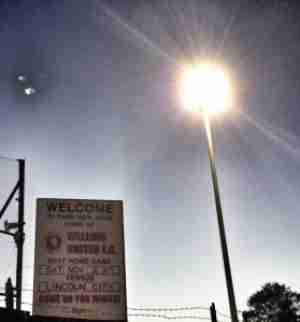 And then there is Welling United.  Sitting in ninth place in the league, just one win off fourth place, the Wings are enjoying life back in the top-level of Non-League football.  Whilst they have been here before, from 1986 to 2000, the world of Non-League football has moved on, so their achievements in winning the Conference South last season was remarkable to say the least. I say that based on some local knowledge.  Living just 4 miles away I have been a regular visitor at Park View Road over the years.  Earlier this year I was at the top of the table clash with Chelmsford City.   Whilst Welling were demolishing a fellow title-contender on the pitch, off it were collection buckets encouraging fans to “dig deep” for Jamie Day’s, the player-manager’s budget.  A year on from play-off final defeat away to Dartford, Welling won the Conference South and took their place with professional clubs who had tasted victory at Wembley when they were Football League sides.  With average attendances of just over 800, few expected anything more than a season-long fight with relegation.  Instead, impressive form at Park View Road has seen them already find their feet in an ultra-competitive league. Today was one of those strange days when your own side doesn’t have a game.  Due to Lewes’s exit in the FA Trophy at the first hurdle a few weeks ago we found ourselves without a game.  A perfect opportunity to spread my wings and try somewhere new surely?  Exactly – until Northern Steve decided to pay a visit.  Northern Steve lives in Lincoln and is a Lincoln City/West Ham/Lewes fan.  Coincidently, the Imps were playing at Welling United.  Funny that.  I gave him the option of paying £50 to go to Upton Park, but like me he isn’t a big Allardyce fan, nor one of 4-6-0 formations and so Welling was the choice.  If you are coming to a Saturday game at Welling then you have to do it in style.  So it was a no brainer that we would go to Crayford Dogs, have a few beers, hop on a bus to Welling and cheer on the Imps. Unfortunately, we were not going to be able to enjoy all of the delights of Park View Road.  Welling had announced this would be a “segregated” game.  I’m not sure if this was a club decision or one based on Police advice.  Many football fans choose non-league football because they are free from the restrictions of the modern game.  Having a beer on the terrace and being able to change ends at half-time are two joys of the game at this level.  Welling have never (as far back as I can remember) had an outdoor alcohol licence which I still fail to understand.  Clubs like Lewes can serve beer outside but Welling can’t?  Similar sized clubs and support.  So are the footballing authorities being discriminatory based on the location of a club?  People from East Sussex behave better after a beer than those of the London Borough of Bexley? Always a mystery to me. 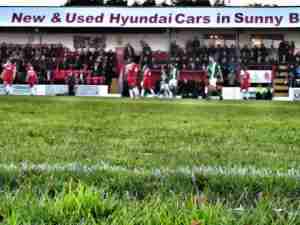 Lincoln were likely to bring a fair few fans so perhaps Welling felt it would be easier to “control” if the Imps were given half the ground.  Whilst I can understand that, I do feel segregation for run-of-the-mill league games is anti-non-league.  We arrived at 2.15pm and paid £15 (fifteen!) to get into the away bit.  All around us were very glum away fans as the club house on this side of the ground was firmly locked shut.  Across the ground the home fans were enjoying a special beer promotion yet the away fans had to make do with a cup of tea.  Good to see fans being treated equal.  A steward told us that the bar on this side was operated by Erith & Belvedere and they had said “someone might turn up to open it” but they hadn’t. On one hand clubs moan about lack of cash and fans attending games, and then you see situations like this. Let’s assume half of the 200 Lincoln fans bought one beer in the club house – that’s £600 for doing what exactly? Welling United 1 Lincoln City 0 – Park View Road – Saturday 2nd November 2013 I don’t think this game will live in the memories for long.  Despite both teams wanting to play attacking football, a petty refereeing performance killed the game as a spectacle by half time, leading to a second half that was as exciting as watching X Factor.  Welling probably just shaded it and will be happy with the three points, delivered by Jake Gallagher not long after half time. Despite Welling’s keeper Lee Butcher being the busier of the two, he was only called into action on a couple of occasions. 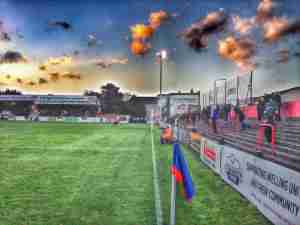 It was good to see that neither team had come to defend and Lincoln quickly found joy down the left hand side where Lincoln’s right back Franks was exposed for pace time and time again.  Some desperate early defending kept the visitors out yet as the half went on it started to become clear that the referee wanted to be the centre of attention.  Constant whistling for minor infringements, yet letter the more serious ones go unpunished frustrated both sets of fans.  Whilst the 300 or so Welling fans got to change ends at half time after a trip to the bar, the away fans had to sit put, hoping that a long journey south would give them some reward. 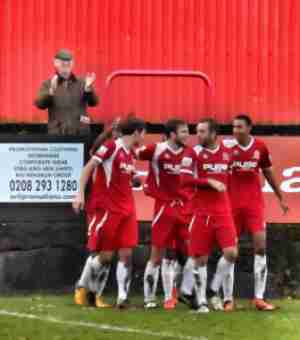 Alas it wasn’t to be.  In the 52nd minute, Healy set up Gallagher who slotted the ball home from 10 yards.  The away fans tried to raise the spirit of the team but after the goal they seemed to resign themselves to defeat, letting all of the positive attacking effort seen in the first half drift away.  With ten minutes to go quite a few away fans headed for the exit, going in search of a beer to dull the pain.  As the referee blew the full-time whistle virtually all of the Lincoln side couldn’t get off the pitch quick enough, completely ignoring the fans who had made the 150 mile trip down south. Three points for Welling took them up to seventh in the table, and just one point outside the play-offs.  Despite the positivity on the pitch, home fans hadn’t exactly come out in numbers.  This is Charlton Athletic territory and the Addicks were away in Birmingham so it’s hard to use that as mitigation.  So what can the club do to attract more through the turnstiles?  Living only 4 miles away I never seen any local marketing activity to encourage people to attend games.  From my vantage position there didn’t seem many kids at the game, yet the club offer free admission to Under12’s – could that be marketed better in local schools (again, having a child in a school relatively locally it is all about Charlton)?  There were around 200 people at the dog racing at Crayford just a couple of miles down the road on Saturday lunch time, and treble that in the evening.  What about a joint marketing campaign with them? How many away fans will say they enjoyed the trip and will come again next season with the segregation and lack of a warm club house and a bar? Good luck to Welling for the rest of the season.  Home form like this will ensure you will live to fight at this level next season.  For Lincoln City?  There is certainly something missing if they have short-term ambitions of a return to the Football League. With the league becoming harder and harder to get out of each season they may be facing a long, hard fight to return to the glory days of Wembley Play-off finals.
Share
Tweet
Share
Pins
Share
Like

Three whacky Football Formations that could work in the Premier League

As a general rule, one needs to learn the rules to break them. I completely accept this rule but since I have had no formal coaching training, I would venture to experiment with football ...