Share
Tweet
Share
Pins
Share
Like
Twenty five years is a lifetime in football.  Back in 1987/88 Liverpool were being crowned First Division Champions (this was pre-Sky of course), Luton Town were still plying their trade in the top division of English football and Swansea City were floundering in the 4th tier.  But a look at the GM Vauxhall Conference tells so many stories.  Wycombe Wanderers, Cheltenham Town and Barnet are the only current sides from that season now playing in the Football League, although a couple of others have tasted the sweet smell of promotion upwards. Kettering Town, Enfield, Northwich Victoria, Runcorn, Telford United, Weymouth, Fisher Athletic, Boston United and Stafford Rangers – all teams who would give their first-born to be competing at that level again today.  All have been to the brink (and in the cases of a few of them, actually over the edge and re-incarnated themselves) and yet to recover.  And then there are the likes of Dagenham (before they found the Redbridge behind the sofa), Maidstone United who are on the rise once again and then finishing in 21st place in that season was Wealdstone. This was to be the last season they played at the top table of Non League football, but the club could be on the verge of taking another step back to the top table of Non League football.  Last season a great run to the semi-final of the FA Trophy built on the foundations of a season that saw them narrowly miss out on promotion via the play offs.  This season they are gamely trying to hang on the coat tails of big spending Whitehawk and will fancy themselves to have another shot at the play offs again, and hopefully promotion to the Blue Square Bet South. 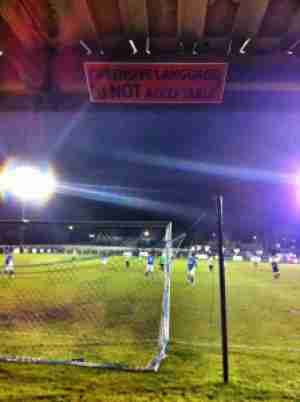 Standing in their way on this chilly Monday night would be the Rooks, who would be making the long journey north from the South coast.  Recent games between the two hardly inspired the stay at home fans to come out in their droves for this Monday night clash.  Two 1-0 victories for Lewes at the Dripping Pan (both thanks to debatable penalties) and a 1-0 win for Wealdstone at The Vale last season had the betters among us reaching for another 1-0 scoreline.  The current form of the two teams couldn’t have been more different though.  Wealdstone had taken 15 out of a possible 18 points from their past six home games, whilst the Rooks had won just twice on the road in the same period. Monday night football has been a feature at Wealdstone for the past few years.  Whilst their groundsman may not like having just 48 hours in some cases (such as this week) to prepare the pitch, the fans seem to approve of it.  Their offer of half price entry for season ticket holders at Premier/Football League clubs has also boosted attendances on a Monday with very few clashes with professional games. Wealdstone 6 Lewes 1 – Grosvenor Vale – Monday 18th February 2013 Sigh….where do I start.  The traffic around the north of London ensured that I didn’t park near the ground until 7:50pm.  As I walked into Grosvenor Vale I heard the distinct cheer and then the tannoy announcement of a goal.  I should have turned around and gone home at that point. All we could do during the first half was to hide behind our hands as it seemed every Wealdstone attack resulted in a goal.  When the fifth went in with still nearly ten minutes left in the half we genuinely thought the Stones would break double figures. I’ve seen Lewes play much worse and win.  I have also seen teams play much worse and score more than six.  It was one of those games.  For twenty-five minutes Wealdstone were unplayable.  They exploited the flanks, got great balls into the area and ruthlessly took their chances.  Dean and Jolly were on fire and the Lewes back four were simple kindling. However, there were glimpses of sunlight in the game.  Nathan Crabb had a great chance to open the scoring for Lewes, and after the break they pulled themselves together in midfield and started battling hard.  Whilst Wealdstone took their foot off the gas, Lewes certainly put theirs down. 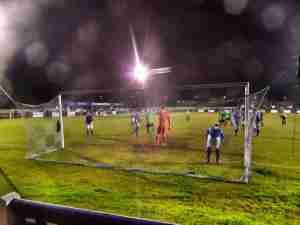 It seemed to be the best fixture in town though, with officials from the Ryman League in attendance as well as Dave Anderson (Harrow Borough), Alan Devonshire (Braintree Town) and Andy Hessenthaler (Gillingham) all in the crowd of nearly 550 including a small travelling contingent from Lewes.  There must have been bad omens in the air as even Cynical Dave decided not to travel to this one. Steve Brinkhurst’s effort before half time at least gave us some cheer and the chance for his Dad to remind Kev to “add that one to your KevPad”. Despite Wealdstone finishing with ten men after their centre-back was sent off in injury time for a harsh professional foul, Lewes couldn’t score.  There isn’t a lot more I can add apart from that.  Well played Wealdstone, we wish you luck for the rest of the season. So much for my 1-0 prediction.  Next time I will keep my mouth shut and stay at home.
Share
Tweet
Share
Pins
Share
Like

About Martyn Grove A very pleasant little ground, with woodland at one end and other pitches all around. The club are slowly building a ground that will enable them to play at a higher l...