Lose your pounds or lose your club

Share
Tweet
Share
Pins
Share
Like
We all know that Non League football is going through a tough time.  At the top end of the pyramid, clubs like Luton Town, Wrexham and Grimsby Town are operating almost as League clubs still, whilst the “upstarts” of Forest Green Rovers and Newport County have wealthy owners who are gambling on the next step.  The crowds are comparable with their Football League cousins as too are the wage bills.  But even in the top division there exists the “have” and “have-nots”.  This season the Blue Square Bet Premier features ten clubs who have Football League experience in the past.  Most of these still retain a Football League business model.  But at the other end of the spectrum the Conference hosts teams such as Braintree Town, Hyde, Nuneaton, Alfreton and Tamworth.  Clubs who survive on crowds as low as 600 in the case of some of these, competing with full-time outfits.  Even in the Premier League the comparison between the likes of Man City and United and Fulham and Wigan Athletic is not so stark. 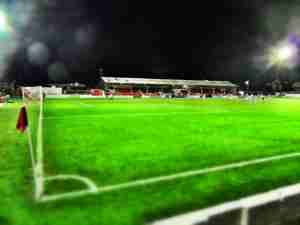 Many clubs reach the Blue Square Bet Premier, but soon slide back down, with the financial burden simply too much.  The season Lewes spent in the top-level of non league football some five years ago almost cost the club its very existence.  Forced to put in additional turnstiles, segregation and other ground-grading criteria, the clubs fail to see additional fans come through the turnstiles to prop up the other side of the balance sheet.  No investment on the pitch soon sees a season long fight against the drop, and with four going down it is hard to escape.  Some clubs are simply too good for the regional Blue Square Bet North/South but not able to compete in the league above.  One such club is Ebbsfleet United. Last weekend the Chairwomen of the club made a dramatic appeal to the fans:- “In all seriousness and joking aside, now is the time to stand up and be counted. Whether you are MyFC, Fleet Trust, both or one of our loyal supporters who just enjoys watching the Fleet, please lose your pounds now! The unfortunate timing of the weather and home fixtures being cancelled has really left the club strapped for cash and the coffers are bare! LOSE YOUR POUNDS OR LOSE YOUR CLUB!!!!! The Football Club is asking EVERY MyFootballClub member, EVERY Fleet Trust Member and EVERY Supporter near and far to donate a minimum amount of £30.00 or as much as you can afford to save the club. Please do not ignore this plea, it is very real and has been decided as a last resort today here at the club.” Crowds have rarely broken the four figure mark, apart from the two thousand who came to see the long-awaited return of the Dartford “A2” derby.  With Charlton Athletic back in the Championship and still running their coach travel from Gravesend, as well as the High Speed rail line to St Pancreas, and thus almost on Arsenal’s doorstep, fans are choosing alternative Saturday afternoon destinations.  The bad weather had caused postponements, which means the club, like many others, has no income to pay the expenditure of club wages and other bills.  Will such stark appeals work?  In most cases no.  Fans already feel they contribute enough by attending games and buying a beer, or a pie.  The emotional attachment in non league football simply isn’t as strong as we like to think, especially if at £15 for entry when economic times are still tough, other entertainment options are more appealing. Despite trying various tactics to get Brighton fans along to Lewes this year, our crowds have fallen slightly.  Fans, whilst they may have an “affection” to a non league club, their hearts lie elsewhere.  A short-term cash injection may starve off the wolves today, but unless a club fundamentally changes the way it runs, they will be back,, hungrier than ever in a few months time.  One aspect that has helped boost attendances has been the kids go free scheme.  I still find it amazing to see the amount some clubs in the Non Leagues charge for the next generation of football fan – Borehamwood charge a whopping £6 for an under 12 for instance. 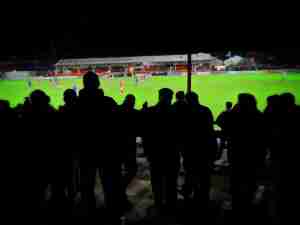 A Friday night game was a different approach.  The visitors were going to be Macclesfield Town, a club who have got their share of back page headlines this year for their remarkable FA Cup run.  Of course there was a common interest for me.  Town’s manager was none other than Steve King, who up until a year ago was in the hotseat at Lewes.  Since parting ways, King has changed virtually the whole squad at The Moss Rose in an attempt to get them back in the league at the first attempt.  Whilst their league form has been patchy to say the least, his cup exploits have kept the detractors off his back.  Despite the rallying call from the club, there appeared to be little effort to try to get more people through the gate.  No special promotions, no “kids go free”, no “Premier League/Football League Season Ticket Holders get 50% off”.  Whilst this would reduce the revenue per head, it would increase the total revenue as more people who come through the gates.  Logical? This game couldn’t have been more perfect for me.  My weeks now end with a trip to our French office.  Whilst it’s not Copenhagen, with its fine food, fine location and even finer local scenery, Paris is growing on me.  Eurostar is a civilised way to travel and with my train arriving into Ebbsfleet at 7:15pm it would have been very rude not to walk across the car park and pay my £15 to watch the game against Macclesfield Town.  Unlike the fools at South Eastern railways I could rely on Eurostar to deliver me on time, which they did, and even allowed me to park free (technically not free but a football match loophole meant I didn’t have to pay to park for the whole day). Ebbsfleet United 0 Macclesfield Town 4 – Stonebridge Road – Friday 1st February 2013 Shall we start with the positives? The club had done well to get the game on, especially with the wet weather in these parts in the last few days.  The pitch looked good although was wearing badly by the end.  The official attendance of 799 (which seemed high compared to eyeballing the crowd) couldn’t complain they didn’t see any action although apart from the 50 or so Macclesfield Town fans they wouldn’t have been best pleased at where it all came. I’d only just walked through the turnstiles before Town took the lead.  Kieran Murtagh lined up a free kick on the edge of the box and drilled the ball through the wall and into the net.  A big sigh went around Stonebridge Road and the regulars in the Liam Diash Stand though “here we go again”.  But to give them credit Ebbsfleet battled in the first half, and could have equalised had the ball been played into the box earlier. 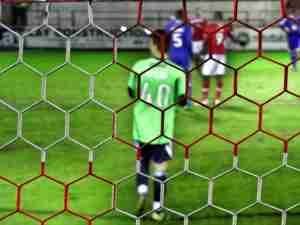 Just before the break I bumped into “Game a Day” John.  You can be sure if there is a game on any midweek night around London, John will be there.  He say’s it’s all about research (he works for one of the High Street betting companies) but I have a sneaky feeling he is addicted to football.  Always pleasant to chat to him though and we discussed the major issues of the day whilst Macclesfield flattened Ebbsfleet in the second half with some powerful counter attacking.  First Fairhurst scored from close range in an almighty scrap and then Mackreth finished a fine move with a Messi-esque finish.  The fourth, almost on the final whistle again summed up the difference between the two sides in attacking abilities, again scored by Mackreth. So what can we take away from this game?  Ebbsfleet do seem to be in that state of limbo.  Probably too good, and dare I say it, too big for the Blue Square Bet South, but not quite able to cut it in the Premier.  Travelling costs, as Lewes found, in the Conference National are massive – away trips to far-flung places such as Barrow, Gateshead and Hyde are not cheap days out.  Many clubs are now taking the full-time plunge and that means the opportunity for clubs like Ebbsfleet to make a challenge towards the top of the table is very limited indeed.  They must be looking on with envious eyes at the progress local rivals Dartford are making. Thumbs up for the Friday night football, but perhaps a few more incentives to get more floating fans through the gates wouldn’t go amiss in future.
Share
Tweet
Share
Pins
Share
Like

Potential Premier League player of the season N’Golo Kante has revealed his admiration for Monaco’s top performer Kylian Mbappe by saying that he believes what the 18-year-old...