We ate all the pies

Peters and Lee, Strawberries and Cream, Katie Price and anyone….Classic partnerships that all the family know and love.  For us blokes we could throw in the likes of Pamela and Anderson or Natalia and Velez (what do you mean who???  HER!)…but there is one partnership that rises above all others.  Football and pies.  Let’s face it, if it wasn’t for those two, we would be able to sing “Who ate all the pies” to any visiting keeper.  We wouldn’t have had the marvellous book 92 Pies by occasional Lewes FC visitor Tom Dickinson and every weekend we would go hungry at the game. 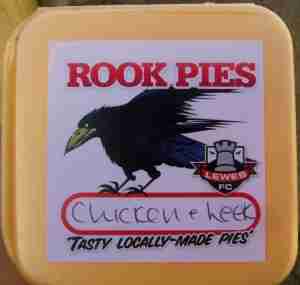 We are especially proud of the match day experience at Lewes FC.  We do not have luxurious surroundings like a Premier League club, but we have heart.  A team of unpaid fans are constantly trying to pushing the envelope with new ideas that are new to football.  But pies aren’t new are they?  But few clubs are able to boast their own brand. In celebration of National Pie Week, Lewes were planning on launching their own range of RookPies at the game against Carshalton Athletic.  Take your pick from Steak and Harveys (of course, Harveys), Chicken and Leek, Chicken Tikka or a special vegetarian Homity variety.  All served by some fans in their finest black and red striped outfits wandering amongst the good and the great of the Dripping Pan.  Ideas formulate quickly and the club are already looking at ways to use social media for pie consumption.  Tweet with your name and location #chickenandleek and within minutes a steaming hot pastry delight can be yours. Of course the game against Carshalton Athletic wasn’t all about the pies.  Three points were definitely more in demand than a bite of crisp pasty and beer marinated steak.  The Rooks were in desperate need of 3 points.  The last league win had come ten games ago, and it had been almost four months since the Dripping Pan audience had seen three points.  We had come close, don’t get me wrong.  Last minute equalisers conceded to Kingstonian and Horsham had cost us four points, which would have still seen us in the mix for the playoffs.  But we all know that anyone on their day can beat anyone else, and so everyone was still looking up the table rather than down. 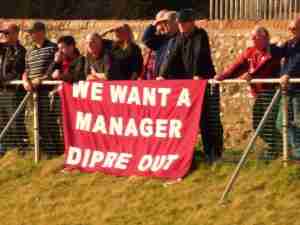 The visitors from South London arrived four places below Lewes.  There rarely seems to be a season go past when Carshalton are mentioned as a potential promotion candidate at the start of the season, and this year wasn’t any different.  However, things off the pitch have been more of an interesting story.  Towards the end of last season owner Paul Dipre decided he could do better as the manager so he fired Mark Butler and pulled on the sheepskin himself which he has yet to take off.  He has also fallen out with a section of the Colston Avenue crowd who see his dual position as a conflict of interest.  For a period a group were actually banned, and a look at their forum today suggests he doesn’t quite have the backing of everyone on the terraces. Lewes 1 Carshalton Athletic 0 – The Dripping Pan – Saturday 10th March 2012 Some days the elements combine to bring back the love for football.  We’ve had a week of financial woes (Rangers, Portsmouth and Port Vale),  Football authority cock-ups (The FA sending letters out to managers telling them to keep their opinions to themselves) and of course club owners who simply live in a very different world to the rest of us (step forward Mr Abramovich).  All reasons to simply shake your head and start watching re-runs of Rising Damp on ITV4. But when the sunshine comes out, the beer is cold, the pies are warm and brought to you and your team finally wins a game you want that moment to stay forever. Well today was one of those days. 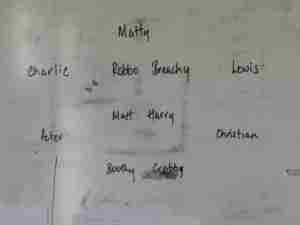 Of course I could have spent a minimum of £32 (plus £1.50 booking fee and £1 Admin fee naturally) for a ticket for West Ham v Doncaster Rovers to watch the ball gather snow as it flew around the lower stratosphere. But instead I headed onto the Jungle at The Dripping Pan for some non league fun.  We don’t have flashy screens in our press area showing the team news.  We don’t have a press area.  We have a wipeboard (or is it a whiteboard?) where Simon Wormull puts the team up in true Football Manager speak. It had been all go at the ground prior to the game as ClubSec Kev had been trying to register our new midfieler Peter Gregory (ex-Portsmouth and signed from Eastbourne Borough) in time for the kick off.  Now in the modern age you would expect this to be done via pdfs or an iPhone app perhaps?  Surely it wasn’t as antiquated as email attachments?  Oh no – we are talking about state of the art FAX here. Yep – it’s all the rage apparently since replacing Telex last season.  With the read receipt confirming the fax had been received, he took his place on the wipe/whiteboard simply as “Peter”…you see he was signed so late that there wasn’t time to give him a nickname.  Perhaps by next Saturday he may get one (Greggers perhaps?). 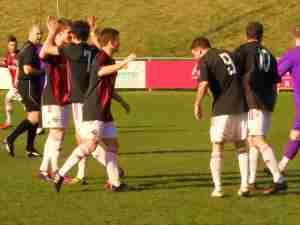 There was a “feeling” around the club that hadn’t been there for the past few weeks.  Perhaps it was the spring bulbs coming through, or the promise of the new pies but whatever it was when the team lined up they looked hungry.  Hungry for a win.  As I headed down the stairs from the office the game kicked off.  Before I reached the half way line we were one nil up.  Nathan Crabb calmly heading home.  But would this mean 88 minutes of gut-wrenching nerves?  Of course it would. Fortunately the goal distracted the pie queue so I was able to sneak my order in.  Chicken and Leek.  Was it worth the wait?  Too bloody right it was.  I even had to put my Harvey’s down to eat it.  It takes something special for a man to put his beer down I can tell you.  Within thirty minutes the pies were all gone.  It had been a total success, although there were mutterings from certain northern members of the crowd about the lack of gravy. The rest of the first half saw a positive Lewes side push forward when they could.  Nanetti, restored to the starting XI saw a lot of the ball, but on a number of occasions after beating his man he took it a step too far when a pass would have been the best option, although in his defence he was fouled time and time again yet nothing was given. Lewes nearly had a second when Greggors (see I have started the official renaming process already) sent a corner in that evaded everyone and smacked against the inside of the far post.  But it was an assured team performance that finished the half, much to the annoyance of the Carshalton fans who were making their feelings very clear about what they thought of their owner/manager. 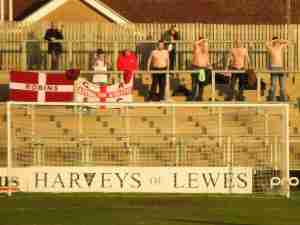 The second half was more of the same.  Lewes pushed forward but didn’t really threaten the Carshalton keeper.  Under18’s star Max Howell took on the left hand side of the pitch, beat everyone for pace before hitting the ball straight at the keeper, and sub Ian Draycott flashed a snap shot across the goal.  At the other end the Carshalton fans decided to “turn Geordie” and strip off although the expanse of flesh simply put their forwards off their stroke as Ingram wasn’t called on to make many interceptions. The final minutes were nervous for obvious reasons.  “Remember Kingstonian and Horsham” came the cry from the back of the terrace.  Five minutes of injury time were somehow crafted by the referee, who then played a further two minutes just for good measure before ending the game and the wave of relief swept around the ground like the rooks who came down from their perches to reclaim their spot on the pitch. 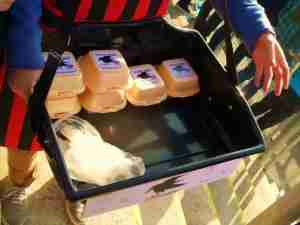 Five hours later and I still have a warm glow about the afternoon.  Doom and gloom stories populated the radio on the way home from West Ham, Wolves, Spurs and Stoke fans.  They had paid the best part of £50 for an afternoon of pain where as I had pain £3.50 for a slice of sheer old fashion footballing delight.  I will take two please for next Saturday.

About Grosvenor Vale The St.Georges Stadium, to give it its proper name, has been Wealdstone’s home for a couple of years now and they seem quite at home at last.  The ground h...