More than a feelin’

I looked out this morning and the sun was gone Turned on some music to start my day I lost myself in a familiar song I closed my eyes and I slipped away As all of you music aficionados know, that is the opening verse from the UK number 22 smash hit from US rockers Boston. The music summed up my start to the day perfectly as I peered out of the window of Northern HQ. Drizzle had taken hold of the day, the same drizzle that had descended on Worksop last night and would hang around until we would pass Peterborough on the way home, when the sun would immediately come out. 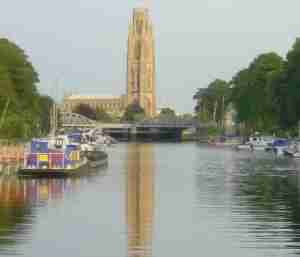 Today was all about Boston. Not Red Sox wearing, Cheers Bar frequenting, Bullish MIT Boston but Stumpy, Flat, Obese Boston. South-East Lincolnshire’s finest with the highest obesity rate in England rather than the highest IQ rate in the US, Massachusetts. Who needs Michael Jordan when you can have Jason Lee anyway? Lee, one of the nicest men in football, and a good friend of this very website is currently doing a great job as manager of the Pilgrims of Boston United. But today wasn’t just about the Pilgrims. Oh no, we were also going Poaching. Boston is home to not just one, but two football teams and both were at home this afternoon. It would be rude to choose one over the other and so I intended to get a slice of both United and Ton flavours of Boston football. “But how Stuart? I hear you cry “Time travel is impossible and there is only one of you”. I know and without any H.G Wells or Doc Brown time travel apparatus I was going to simply go into Tapas mode – a taster at both just for you, dear readers. First up would be a trip back to York Road to see Boston United play Workington in the Blue Square Bet North. Our last visit had come during their five-year period in the Football League when they demolished Shrewsbury Town 6-0 (and missed a penalty).Some people still have a grudge about The Pilgrims, thanks to a certain Steve Evans, currently at Rotherham United. Evans was in charge of the club when they rose through the leagues and were promoted from the Conference National ten years ago. Except they didn’t do it “cleanly”, with Evans amongst others being found guilty of making illegal payments to players in their promotion season. Unfortunately, our toothless footballing authorities decided to punish the clubs who suffered rather than the guilty parties. Evans was banned from football (although was still able to return to be in charge of Boston after his ban), and the club docked four points but not retrospectively applied to the period where they gained the advantage which meant that Dagenham & Redbridge who finished runners-up to Boston got no redemption. 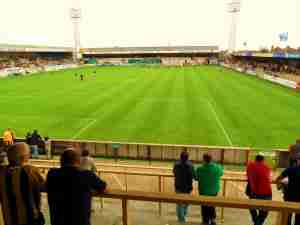 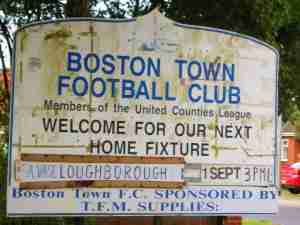 So after a half of football at United, I would head up the Tattershall Road to take in the second half of the FA Vase (sponsored by Carlsberg don’t forget) where Boston Town would be taking on Loughborough University. The Poachers (they are experts in cooking eggs so I believe) were formed in 1964 by a few ex-Boston United officials who had left after expressing concerns about the financial state of the club (30 years before their time as well!). Their high point came in 1976 when they reached the 1st round of the FA Cup, losing to Barnsley. Today they are at home in the United Counties League, with an eye on reaching the Evostik League one day. Alas I would be making my journey on my own. Northern Steve was on party preparation duty for SCMF (Sister of Current Mrs Fuller) who was celebrating her 40th later in the evening. What better present than my return, bearing fables of a far exotic land? Boston United 1 Workington 3 – York Street – Saturday 1st September 2012 Just you and me, we were go walking together, Watching the sunrise over the trees Wa-Oo-Wa-Oo-Wa Wa-Oo-Wa-Oo 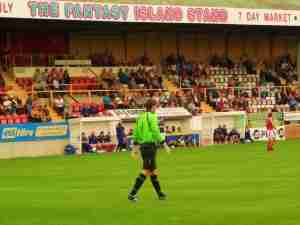 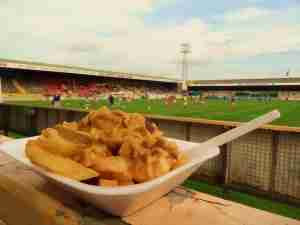 Firstly I have to give top marks to Boston for the finest portion of curry and chips I have ever had.  Not a dish you will see on many take away menus down south, let alone in a football ground, it went down a real treat and set me up for a mouthwatering game.  The home side certainly started the brighter, but as more often is the case, fell behind against the run of play when Da Costa was adjudged to have been fouled in the area and Gareth Arnison slotted the penalty home. However, the home side continued to pass the ball around nicely, using the width of the pitch, and stretching the visitors.  It was amazing it took them until the 38th minute for the equaliser to come.  Jones played in Weir-Daley and his shot flashed across the goal and past the Workington keeper. Half time saw my cue to leave for pastures new, but it appears despite dominating play in the second half, Boston didn’t take their chances, whilst Workington did.  Boston Town 4 Loughborough University 3 – Tattershall Road – Saturday 1st September 2012 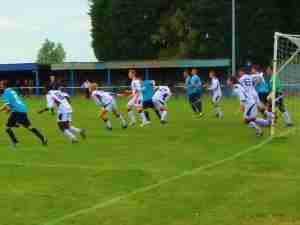 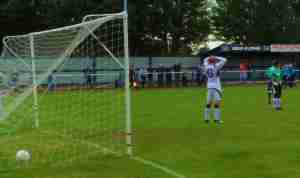 About Eden Park Avenue This is a strange ground, and in some aspects feels more like a cricket ground with an old fashion wood pavillion set back from the pitch with a picnic area in fro...