“In life or football, the margin for error is so small. One half a step too late or too early and you don’t quite make it. One half a second to slow or too fast and you don’t quite catch it. The inches we need are everywhere around us. They are in every break of the game. Every minute, every second. On this team we fight for that inch.” Bank Holiday Monday. The last traditional blowout before Summer came to an end, the kids went back to school and the shops could start putting out its Christmas displays. We can all remember those “Jolly Boys Outings” to Barry Island, Southend-on-Sea and Skegness, when the sun shone all day, and Steve Wright was still trendy enough to be hosting the Radio One roadshow. Back in the day these were days we looked forward to for months. But today it is all a different world. For the price of a return train ticket to the coast these days, you can fly to the Mediterranean. Festivals have replaced the road shows and Steve Wright is still on the radio. But the tradition of a Bank Holiday Monday football match hasn’t disappeared just yet, although for Lewes FC this season, it almost did. Today would see my league debut for Lewes FC. Hang on, that MAY confuse a few people. It would mark my attendance of my first Lewes league game of the season. Enforced, but highly enjoyable trips to Aachen, Marrakech and finally Lincoln had meant I had missed our first three games of the season that had seen tears, tantrums and total football. Well, almost. After a mixed pre-season bag, The Rooks season had got off on the wrong foot in the “hotter than Greece’ environs of south-east Sussex when Enfield Town won the battle of the Community Clubs last week. Lewes then headed north into the jungle of west Sutton and produced a sterling performance against “moneybags” Carshalton Athletic, coming away with a 3-3 draw. Saturday saw our re-aquaintence with Thurrock and their piped fan noise to try to make up for one man and his dog (@nonleaguedogs) watching them.  Alas the Rooks came away very very wet indeed with nothing but a receipt for the Dartford crossing in their back pocket.  So one point from a possible nine isn’t the best start in the world. But as we know, every season is a marathon not a spring. As Al Pacino once famously said, “When you add up all those inches it makes the difference between winning and losing”. What’s gone is gone and so all you can do is look at the next challenge. 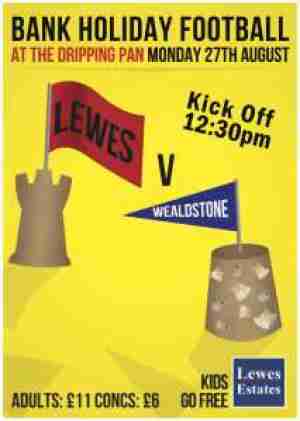 So back to today and the eagerly awaited clash with Wealdstone. Last season’s corresponding game at The Pan was stormy to say the least, with a Nic Ciardini controversial penalty separating the sides. Emotions ran high that day but football has to move on, so an early visit of Mr Jolly and co was more than welcome. However, we had a problem. Back in the day of the Radio One roadshow on a Bank Holiday Monday security was never an issue. We used to go to the local offie, pretending we were old enough to buy our Marlboro’s and White Lightning before we would impress the girls by blowing rings with our cigarette smoke. There was no need for security. If we mis-behaved someone gave us a clip around the ear. Before our golden age the seasides used to be filled up on Bank Holiday Monday by the Mods and Rockers. Inevitably it all kicked off, but did they need security? No, they didn’t. But these days, five (I think there are five) talentless boys lipsynching in front of a crowd of screaming young girls warrants almost a military manoeuvre. Because of the appearance of JLS at Hove cricket ground, our game was in doubt. 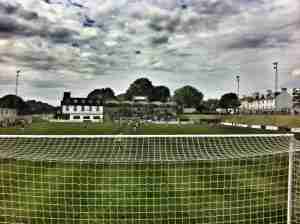 Because of the number of people attending the concert, most local accredited stewards had been asked to work, meaning that our regular ones were being poached for the afternoon. As the concert was starting at 7pm (bless ’em, they had to be in bed by 9pm), we could not kick off at 3pm. The Ryman League told us we had to play on Bank Holiday so a 12.30pm kick off was reluctantly agreed upon, meaning an early start for our visitors as they would have to travel down from north-west London. Last season was one to remember for all Wealdstone fans. I think most clubs and fans at our level looked on enviously at their run to the semi-finals of the FA Trophy. As a director of one of those envious eyes I was mentally calculating the prize money and how it could set up the club for the remainder of the campaign. Despite playing a game every few days the Stones continued their good form in the latter stages of the season, eventually leapfrogging over Lewes into the Play Off spots with just a week to go (although the win at Tooting & Mitcham that took them there was played out with the home team fielding a centre forward in goal for the whole match). They made the playoffs, but could not manage to find that extra 1% of energy to take them into the final. One of the stars of the campaign was undoubtably 48 goal Richard Jolly, who seems to have been scoring goals for fun at this level, not just for Wealdstone but for Sutton United and Carshalton Athletic for years. Whilst he had said during the summer that the time was coming to hang up his boots, the bad news was that he was lining up against us at The Pan. Lewes 1 Wealdstone 0 – The Dripping Pan – Monday 27th August 2012 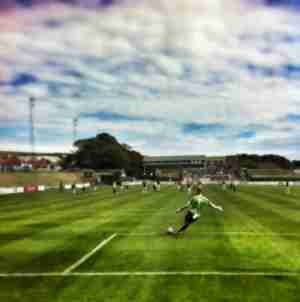 As Al Pacino will tell you, it is all about that six inches in front of your face.  What he means (I think) is that every long journey starts with a small step, and that means winning one game at a time (enough metaphors now).  After three disappointing results, today was about one thing – a win.  With some bitter irony, Lewes got the three points, like last year from a controversial penalty. The game was certainly full-blooded, with the referee at times not really sure how to keep control.  That is not to say it ever boiled over but on occasions he forgot any consistency in his decision-making.  Chances were few and far between, with Lewes’s keeper Thorp the busier of the two.  It seemed that the early start had caught out the Wealdstone strikers, messers Jolly and Fitzgerald as they were well marshalled by Robinson and Breach, celebrating their 150th and 100th appearances for the Rooks respectively. However, the turning point in the game came with just ten minutes to go in the game.  Nathan Crabb chased a long cross-field ball from Max Howell, pushed the ball passed the centre-back and was brought down.  The assistant referee immediately flagged for a spot kick and the referee took his word and gave the penalty. Harsh?  Probably not, although you will see similar incidents in most games that aren’t given. 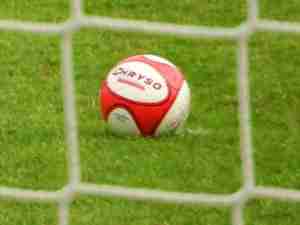 Karl Beckford placed the ball, and looked ex-Lewes legend Rikki Banks in the eye before sending him the wrong way from the spot kick. The final few minutes were played out with some nervousness from the fans.  We can remember those dark days of injury time equalisers all too well from last season and didn’t want a repeat today.  Finally, the ref brought an end to the game and three points were in the bag.  It certainly wasn’t a classic.  The 150 or so Wealdstone fans trooped off disappointed with the result I am sure but they themselves know after their spectacular form at the end of last season that winning doesn’t have to be pretty (or deserved in some instances).  As Al Pacino will remind us:- “That’s what living is. The six inches in front of your face.”

Dutch legend Ronald De Bour has revealed that Memphis Depay had all the necessary ticks to succeed at United but failed to do so because he couldn’t adapt to the higher intensity of...