Share
Tweet
Share
Pins
Share
Like
For most Non League sides the difference between success and failure in a season can be found in their pre-season calendar.  One or two big name friendlies can add anything up to 20% to the income stream for a season.  Planning starts in some cases a year in advance and is often added as a sweetener for any transfer deals that are done involving the Non League club and a professional outfit.  Big clubs will get dozens of approaches every year from clubs big and small, although the world has moved on from the fact the biggest game they would play would be against a Coronation Street XI. Today it is all about the pre-season overseas tour.  Everyone is at it these days.  No longer is it the preserve of the Premier League sides – League One and Two clubs these days often head overseas to get their “team building” in as well as a few games in the sunshine.  This week sees the departures of Charlton Athletic and Brighton & Hove Albion to Spain for pre-season tours against the likes of Real Betis, Sporting Lisbon and er, Portsmouth.  However, before the Seagulls depart for some sun, sand and soccer they had an appointment down the A27 with the Rooks. 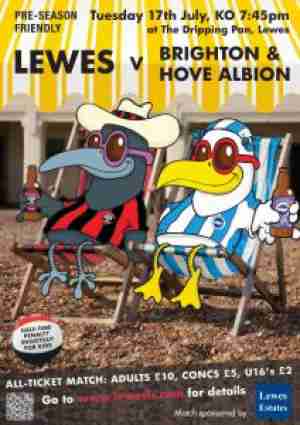 For Lewes this was the biggest game in a number of seasons.  It had been in planning for over 6 months and just 48 hours before the game the Rooks were able to announce that the game was a 2,200 sell out (later revised to 2,426).  In terms of potential receipts, this would see around £15,000 flow into the club (excluding any bar takings, food and club shop sales) although some of that had already been earmarked.  With a club like Lewes having a playing budget around the £75,000 mark for the season, this game could make the difference between a new player or two. After their exploits in the rain in the shiny new Gallagher Stadium in Maidstone, the Seagulls swooped into the good old Dripping Pan.  Lewes don’t have fancy new dressing rooms, a car park big enough for a coach or a 3G pitch, but they have heart, passion and an army of helpers who were determined to make this event a success.  And they did what they do best – they all mucked in and improvised.  Car parking spaces were reserved in the pay and display with Under18’s players standing in the spaces for the Brighton players BMWs and Mercs, treatment tables were set up outside the dressing room and boardroom converted into a bar (The Boardakabin became the Barakabin). It seemed everyone was pulling in the same direction to make the day a success.  During the afternoon the Olympic Torch had passed within a goal kick of the Pan and the sun had made a very rare summertime appearance.  By 6.30pm the gates were open and East Sussex’s finest were flowing into the ground, ready for a glimpse of the Princes against the Paupers.

Poyet arrived and asked for a cup of tea (white, on the strong side but no sugar).  All hands were to the pump so it was left to yours truly to act as Gus’s beverage gimp for the evening.  A walk around the ground saw everyone excited about the presence of the Albion, although the Lewes players, some of whom weren’t even born when Poyet was playing, seemed relaxed.  All of a sudden it was game time.  And like true contenders in a World Championship fight, the Rooks kept the Seagulls waiting in the “tunnel”…and waiting, and waiting.  Eventually the team emerged, Sussex by the Sea filled the air and we breathed a first sigh of relief.  No queues outside, everyone in place, let battle commence. Lewes 0 Brighton & Hove Albion 3 – The Dripping Pan – Tuesday 17th July 2012 History will record this as a predicted result for the Championship team, fielding the vast majority of their best starting XI against a side five leagues below.  But for long periods they knew they were in a fight (in a nice way most of the time).  The new look Lewes midfield of Jack Walder and Karl Beckford snarled, snapped and niggled at the Albion players whenever they had the ball.  In a parallel universe they would have also gone in at the break one goal up. 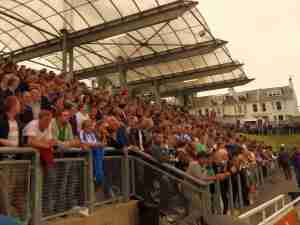 I had managed to snag one of the best seats in the house in the office (two stories up) as my tea making duty seemed to never end.  Either Gus was drinking a lot of tea, or I was making them for every Tom, Dick and Barry in the ground.  There are few finer views in the world of football on a Summer’s evening with the fantastic lush playing surface framed by the white South Downs in the background.  The crowd had squeezed into every cranny of the Pan, stretching it like it hasn’t been stretched for years.  Lewes fans, Brighton fans, Celebs (David Dimbleby spotted tucking into the Harvey’s), men, women and children, with smiles on their faces. The first chance of a cagey half fell to Bridcutt who saw his piledriver pushed onto the bar by Lewes keeper Kieron Thorp, much to the “oooohs” of the crowd on the Philcox Terrace.  Then at the other end, on-loan Man Utd keeper Tomasz Kuszczak pulled out a Premier League save to deny Beckford’s excellent free-kick.  It looked like we would go into the break all square, but then Ashley Barnes continued his red-hot pre-season form by smashing the ball home from close range after Vincelot’s pull back had eluded the Rooks defence. 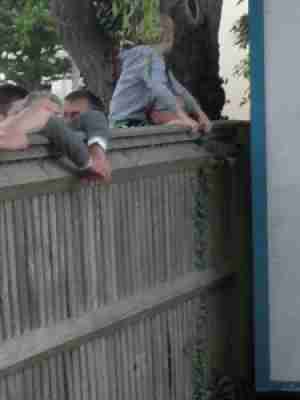 Half time saw the young Rooks beat the Seagulls in a penalty shoot out, although the keeper was a bit of a clown (well, a jester anyway) whilst I made some more tea.  Apparently Gus loves PG over Tetley’s and semi-skimmed over full fat if you are ever asked.  Brighton had stated their intention to make 11 changes for the second half and the substitutes had headed next door to the bowling club to warm up, leading to a bizarre sight of fans outside the ground who had been peering in now getting a front row seat of LuaLua, Saltor and Agdestein going through their exercises. The second half saw Brighton step up the pace, using the width of the pitch to great effect.  LuaLua started running at young Charlie Leach, causing him a few problems and it was no surprise when he set up the second goal when his run into the box was illegally ended by Hopkinson.  LuaLua could take no further part in the game, reducing the Seagulls to ten men, but Hoskins made amends by slotting in the resultant penalty. Ten minutes to go and with that rare fiery ball in the sky disappearing behind cloud, Bruno Saltor set up Torben Agdestein to make the game safe.  Agdestein thought he had scored a fourth a few minutes later when he rounded the Lewes keeper and hit the ball towards an empty net.  However, Charlie Leach raced back and somehow kept the ball out and earnt a massive round of applause from the capacity crowd.  There was still time for Lewes Player-Manager Simon Wormull to roll back the years with a thunderous strike from distance that had Brezovan beaten but it just flew over the bar. 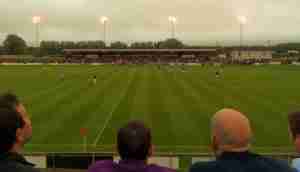 Full time and the capacity crowd filtered out of the ground happy. Now we could breathe a sigh of relief.  The event had been fantastically executed and it had proved we had the capabilities to host big (in Non League terms) games.  Yes, we could have done some things differently, but as we all sat in the office with a smile on our faces at weeks of hard work, Club Sec Kev piped up….”Oh, shit – I forgot to mention.  Crystal Palace called earlier – they want to bring a first XI down on Friday night…” Only 72 hours to do it all over again! More photos from the evening can be found here.
Share
Tweet
Share
Pins
Share
Like

Apart from my trip to the dark side a few weeks ago to watch the New York Red Bulls, my season ended over two months ago.  Last season I managed to shoe-horn in 104 games in 14 countries ...