Share
Tweet
Share
Pins
Share
Like
I’ve never really hidden my admiration for the progress Dartford have made on and off the pitch in the past few seasons.  Just a year or so ago I waxed lyrical about my upbringing just down the road from Watling Street and my afternoons spent running around the terraces here..  Back in “the day” they were one of the top Non League teams in England, along with the likes of Wealdstone, Altrincham and Weymouth.  In an age when there wasn’t any automatic promotion to the Football League, the top non league clubs had to apply for election to the League each season and hope that the Football League Chairman were satisfied with the contents of the “envelopes”.  Consequently only seven clubs were elected into the league by this method, the last being 1978. 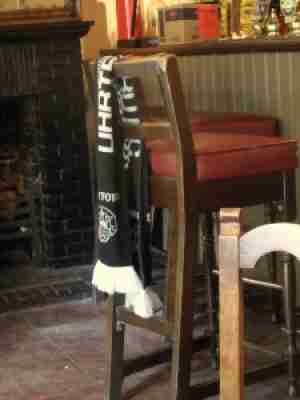 Dartford came close to making the step from the Non Leagues to the Football League on a number of occasions, the last one was in 1974 after they won the Southern League, and reached the final of the FA Trophy.  Ten years later, after the formation of the Football Alliance (basically now the Blue Square Bet Premier), they finished third, the highest place they have finished in their history.  Since then it was a tale of woe that saw them penniless and homeless in a space of a few years.  A nomadic existence followed at places like Erith, Thurrock and Gravesend before a local council with a vision stepped in, finding them a home back in the town. Not just any old home though.  Must has been written, and awards have been won for the 4,100 capacity Princes Park, just over half a mile away from the old ground (now of course houses) in Watling Street.  You can read all about what makes the stadium so different here but suffice to say its bloody marvellous.  Just a few months before the ground was opened in 2006, Terry Burnham was re-appointed as manager with the club in the lower reaches of the Southern League.  Since they have never looked back, rising through the leagues until they reached the Blue Square Bet South for the start of the 2010/11 season. This season has been their best yet.  An epic battle with eventual champions Woking went to the last games of the season, whilst average attendances have top 1,200 – the best the club has had for three decades.  But it is still not a finished job.  One game is left.  One game that would shape the season.  One game that would take them back to where they were nearly 40 years ago in that elite group of Non League clubs. 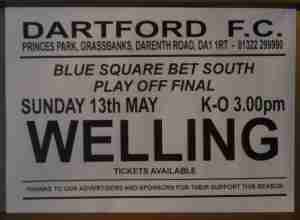 Standing in their way was Welling United from just down the A2.  The Wings themselves were looking to return to the top level of Non League football where they had played for a magnificent fourteen seasons up until 1999/2000 season.  They had a corker of a season as well, finishing in third place under the guidance of highly rated manager Jamie Day. To say this was the biggest game Kent had seen in years was an understatement.  As soon as the two clubs won their semi-finals against Basingstoke Town and Sutton United respectively, all the talk was of this one.  Tickets went on sale for just 10 hours.  4,100 of them were snapped up, making it the first sell out at the ground since the opening fixture back in November 2006. Fortunately, CMF had been employed to camp out at the ground all night to be one of the first to get our tickets.  Don’t worry – I made her some soup and bought her a copy of Women’s Own to read.  It didn’t rain that much anyway so all was well as she came home on Wednesday, slammed four tickets on the table and disappeared up to the bedroom.  Danny, Deaks and Dave would be pleased. Win this game and you would be swapping an away trip in front of 200 to the likes of Weston-super-Mare or Thurrock for Lincoln City, Grimsby Town or Hereford United.  The revenue gap between the two leagues is huge, and that is why it is sometimes a step too far for some clubs, such as Bath City and Hayes & Yeading, although both Dartford and Welling United can take comfort from the excellent progress made by Braintree Town this season in the Premier after promotion. For such a local game it we were letting the train take the strain.  Just a twenty minute from TBIR Towers to Dartford would give us plenty of time for a spot of culture.  Perhaps a visit up to East Hill to see the site of the former City of London Lunatic Asylum (they called apples, apples back in the day), then onto York Road where the Duke of York surrendered to King Henry VI and finally to Powder Mill Lane, where of course we all remember John Spillman set up the first paper mill in England back in 1588. Alas, we had tried to get access to the little known Dartford Cable Tunnel, which runs under the Thames to Essex and is owned by the National Grid but our request to “leapfrog the Thames” had been flatly refused.  So instead we had to make do with such fine historical establishments as the Malt Shovel, The Wat Tyler and the Rose which was once owned by larger than life Darts player Andy Fordham. Dartford 1 Welling United 0 – Princes Park – Sunday 13th May 2012 I am always confused as to in which games it is the performance or the result are more important.  This was certainly one game where it was all about the result, which was quite fortunate because as a spectacle it failed to live up to the pre-game hype and the explosive start that Dartford made. 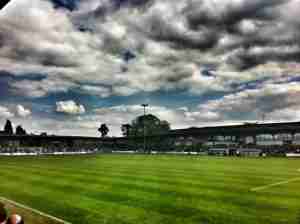 The game had been sold out for days and to be honest we expected some sort of chaos outside the ground.  Being English we of course left the pub with twenty minutes to go and got to the ground with a few minutes to spare.  But it seemed that the vast majority of the 4,088 crowd were already in situ.  For the first time in what seems like months I was going to be watching a game in England with the sun shining.  After all, the cricket season was only 6 weeks old! As soon as we found a spot on the terrace underneath the big wooden man Dartford took the lead with a goal worthy of winning any play off final.  Lee Noble picked the ball up in midfield after just two and a half minutes, took the ball forward and fired the ball from 25 yards into the bottom corner of the Welling net. Bosh…First blood to the Darts. 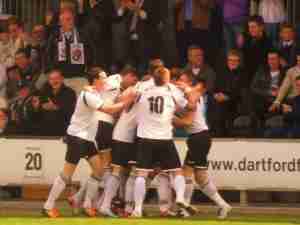 One should have been two a few minutes later when the direct approach from the home side saw the ball find Bradbrook unmarked in the six yard box but he headed wide.  Welling then found their rhythm although it was a little bit in the style of Stoke City.  There seemed to be far too many end passes hit long and high to no one in particular and whilst Welling won the half in terms of percentages, the score reflected the chances on goal. We headed up in the Princess Suite for some half time refreshments.  The licencing laws in this country are truly bizarre.  Whilst beer could be served in this huge bar, blinds were pulled down to stop anyone looking at the game.  You could peer around the edge of the blinds and get a sneak view, but woe betide anyone who tried to raise the blinds even an inch.  Tut tut.  With one of the most exciting Premier League campaigns unfolding on the huge TV screens quite a few fans decided to stay in the bar, meaning we got their front row seats. Nice! 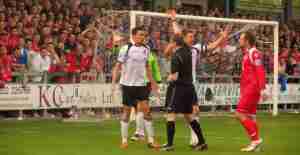 The second half was more of the same.  Welling tried to push forward but the solid Darts defence more often than not repelled borders. Despite player/manager Jamie Day trying to change the rhythm of the game, Dartford looked too strong. Despite our intention not to let events elsewhere affect our viewing pleasure, it was hard not to keep an interested ear and eye on the top of the Premier League.  Even the Darts players had an interest as one of them asked what the latest scores were when he came over to take a throw, looking in disbelief when we told him QPR were winning at Man City.  Four minutes of injury time were displayed and despite a late rally by the Wings, Dartford held firm and I do not think I have seen anyone run so quick as the referee as he headed for the tunnel, blowing the whistle as he ran down the tunnel.  Good to see solidarity with his linesmen who stayed on the pitch trying to retrieve the ball. Dartford were promoted.  They had finished second on merit and were now going up to the top level of non league football after a 26 year gap. Manager Tony Burman has very carefully and cleverly built a team that can compete at every level they have played and you can see that some of the work is already in place for next season. 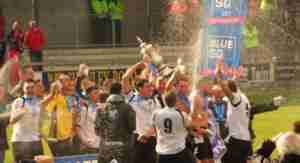 As for Welling? Another great season punching above a number of teams who have more financial resources (Chelmsford City and Havant to name but two).  They would be back I am sure next season when the competitive landscape without Woking and Dartford (and with Bath and Hayes coming in opposite direction) is easier.  But who knows what Non League football will throw up.
Share
Tweet
Share
Pins
Share
Like

Liverpool vs. Man City: Three things to expect from the Anfield clash

The Premier League returns after the midweek cup action, and with it the excitement keeps fanning. One of the most eagerly anticipated fixtures in this round is Manche...