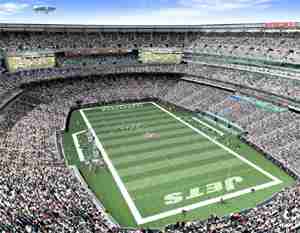 This was going to be quite a weekend.  Work decreed that I must go to New York City for a week.  Hard life eh?  But because I needed to be fresh and ready for action on Monday morning I had to fly on Sunday.  And Sunday in mid November in New York means American Football.  You either love it or hate it.  I was trying to love it.  But it does go on a bit.  Did that put me off splashing out hundreds of dollars on a ticket for the 82,500 all seater state of the art MetLife Stadium in East Rutherford?  Not a chance.  I was going with two intentions.  Firstly to eat every single type of food that passed my way, and secondly to jump up and down, shouting “Awesome” and high fiving everyone around me.  How very British. But before I could experience the excitement of East Rutherford, I had a small date in East Sussex.  Bury Town were making the relative long trip down to Lewes for ANOTHER top of the table clash in the Ryman Premier League.  With everyone beating each other, Lewes came into the game in fifth place, but just four points behind leaders Billericay Town.  The visitors?  Four points behind, so it was another “must win game”. 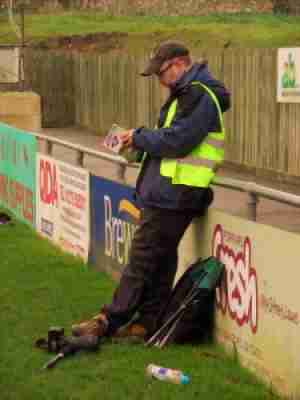 The original plan was to meet Luge Pravda in New York for the “GridIron” but as luck/fate/whatever would have it, LOGISTICS (an in joke) meant he had to spend the week in London, meaning he could make his long overdue and anticipated debut at the Pan.  And if I was going to be running around one of the most modern stadiums in the world like a loon thirty hours later, it was only fair that Luge did the same at The Dripping Pan.  Sure, there would be around 82,000 less people at the game, but we made sure every time he went for a Harvey’s, he was asked for ID and everyone wished him a “Nice Day”. Luge wasn’t the only new visitor to the Pan.  David “Hartch” Hartrick had made the journey down from “up north” for some chips without gravy, and some flat larger.  Hartch is one third of the legendary website In Bed With Maradona, and the creator of the hottest web property at the moment “500 Reasons To Love Football“.  Not bad for a man who cannot find the on button on a computer. The disappointment of the cup exit to Harlow Town last week was tempered slightly by a real honour for the club.  A call out of the blue to the club from the Danish FA on Tuesday saw their Under19’s team arrive at the Pan on Wednesday to use the facilities in preparation for their game against England at Brighton on Thursday.  They were suitably impressed with the Pan, leaving USB sticks and pocket torches for all (obvious gifts). This was to be the battle of the brewing towns.  Lewes versus Bury St Edmunds.  Harveys versus Greene King.  Sussex Best versus IPA. We all knew the winner of that one, but the game on the pitch?  A tough call.  Bury came to town with ex-Ipswich Town centre forward James Scowcroft in their ranks.  But who needs an ex-Premier League centre forward who scored nearly a goal every four games when you have Nic Ciardini. 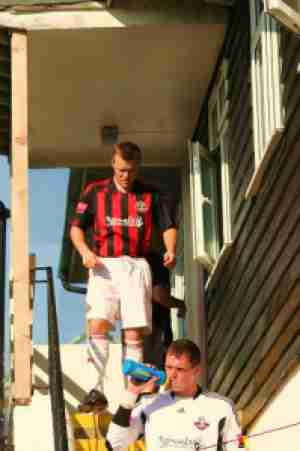 Ciardini came to the club in the summer, following Steve King from Farnborough.  He impressed the LLF in the first outing of the season at St Neots, setting up all three Lewes goals and has continued to work tirelessly since.  His finest moment of the season?  The two well taken goals in just a few second half minutes to earn a draw away to Tooting & Mitcham United back in September. He has won favour with the fans because he seems to want to play with a smile on his face.  Last week at Harlow a home fan compared him to a “young John Robertson”, the talisman of Brian Clough’s Nottingham Forest in the late 1970’s/early 1980’s and today I found myself pre-match handing over The Sussex Express’s Man of the Month trophy to Nic. Lewes 1 Bury Town 1 – The Dripping Pan – Saturday 12th November 2011 “For more than ten years there’s been peace – everyone to his own patch. We’ve all had it sweet. I’ve done every single one of you favours in the past – I’ve put money in all your pockets. I’ve treated you well, even when you was out of order, right? Well now there’s been an eruption. It’s like fuckin’ Belfast on a bad night. One of my closest friends is lyin’ out there in the freezer. And believe me, all of you, nobody goes home until I find out who done it, and why.”  Harold Shand. Recognise the above quote?  It comes from one of my favourite ever films (and one of the BFI’s top 100 of the twentieth century) – The Long Good Friday.  Harold Shand is Bob Hoskins. And it is completely irrelevant to this game apart from two factors. One – Hoskins was born and bred in Bury St Edmunds, and two, he shares his name with the ex-San Francisco 49er Defensive Tackler.  And as I was just a few hours away from my NFL debut I thought it would sit quite nicely as an intro. 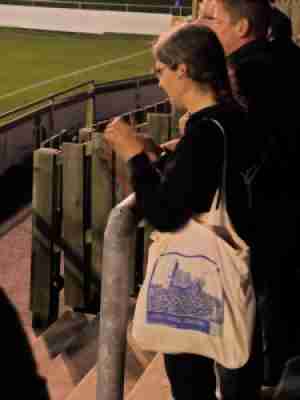 And so to the game, which has been decreed as the “Big Knit”.  Always at the edge of innovation, the wonderful board had arranged for a number of people to knit red and black hats for Rooks (well, actually for Innocent bottles) during the game which were then to be sold off for charity.  With the launch this week of the fantastic 500 Reasons To Love Football which we contribute to, here was another entry – people knitting at football. To be honest during the second half the knitting was the most interesting moments.  This was a bore draw, enlightened by one moment of sheer stupidity. It had all started so well for Lewes.  Ciardini, buzzing from receiving the Sussex Express Man of the Month award from yours truly put in a couple of decent crosses.  But it was Nicholas who created the opening goal when his cross was dropped by the Bury keeper and Draycott stooped to head home from two yards out. Corner followed corner as the Rooks piled on the pressure but couldn’t find a way through the defence.  One man who seemed to be hell bent on stopping the attacking intent of Nanetti was Daniel Cunningham who flew into a couple of challenges with a bit too much vigour.  Unsurprisingly he was booked eventually. 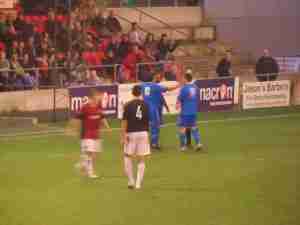 Fifteen minutes into the second half he received a second yellow for not retreating ten yards on a free kick, despite being told twice by the referee to move back.  In truth he seemed to be spoiling for a fight all afternoon and as he took world record for the longest time to leave the pitch, the prophetic Mr Last suggested he was on his way to “kick the dressing room door in”…It wasn’t his foot he put through the door, rather his fist.  The bill for the damage is in the post Mr Cunningham. That was really the sum effort of the afternoon.  Lewes missed Somner in midfield but Bury game with a plan and executed it perfectly.  Autumn had taken a hold and as the mist rolled in across the pitch post match Patrick Marber and myself stood all alone on the Jungle chatting about love, life and the Ryman Premier League. Two points dropped certainly, but we would bounce back.