Hands up who knows why Whyteleafe FC hit the national headlines in 2010? Most leafiest ground?, Most “shhhh’s” from the neighbours when you leave the ground or how about the most NIMBY’s as fans?  None of these.  In fact many of you will be scratching your head right now wondering where such a slice of paradise actually is in our green and pleasant lands.  Well, in the words of Gary Barlow’s mate, let me entertain you. 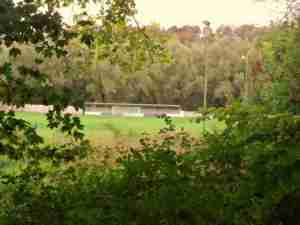 The village of Whyteleafe has a population of just over 3,000.  It sits in a fertile valley with not one, or two but THREE railway stations.  Sheer greed and I bet the locals still moan when the leaves start falling on the lines.  Even Wikipedia have struggled to fill a page on the comings and goings of the village, resorting to telling us that the local vicar, Gill Reeves, normally conducts his sermon to a congregation of 30. But all that changed last summer.  Whilst the rest of the world were getting high on the carnival atmosphere of the World Cup in South Africa, I could imagine there was an emergency meeting of the local residents association, Neighbourhood Watch and the oldest surviving Home Guard in England.  The number one topic?  Vuvuzelas.  Those African horns that had given the world a constant case of tinnitus were the major issue causing sleepless nights in CR3.  They had to act, and act they did with such ferocity that it caused the local WI to unite for the first time with the football club.  In hushed tones, the football club came forward in those dark days and spoke for the whole of the village. The statement said: “Anyone bringing a vuvuzela to the clubhouse during the world cup will be asked to leave it outside before being admitted to the clubhouse to watch the matches on the big screen, and when the season starts, will not be permitted to take them into the ground. “Whyteleafe believe this will be a very popular move with fans who have widely condemned the vuvuzela which has spoilt the atmosphere at most of the World Cup matches and wish to ensure that fans can enjoy and support football in the traditional way at Whyteleafe.” BANG! Blatter was on his knees.  Goal line technology was the hot potato after Lampard’s effort against Germany, but that was soon forgotten. It was like a remake of “The Mouse that roared“. 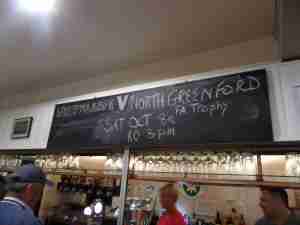 I have no idea how many fans were ejected last season from the picturesque Church Road for bringing in their bits of cheap plastic to use.  Quite an ironic statement considering one of the biggest employers in the area is Ann Summers, who are located just down the road in Rampant Rabbit Way. But it got them some good publicity. Today was all about the FA Trophy.  The Non League Cup Final.  Whilst clubs like Whyteleafe, and today’s visitors North Greenford United stand very little chance of making an appearance at Wembley, it is still an opportunity to pick up some cash from the FA.  For this preliminary game a cool £2,000 was at stake.  Whilst this equates to around 70 minutes of Carlos Tevez’s wages, to Whyteleafe with an average crowd of 97, this is the equivalent gate receipts of three home matches. 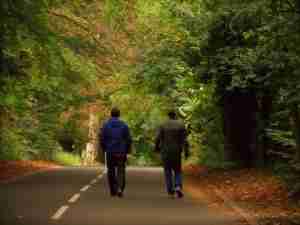 So why were Danny Last, Damon Threadgold and I heading down the A22 and up country lanes for this game?  Well, simply because that is the crazy life we have.  With a massive set of games coming up in Czech Republic and Slovakia we needed a warm up event.  Just like Real Betis played Neath back in early August as a taster for their European season, we were getting ready with the bad fashion sense and copious amounts of alcohol for our trip behind the virtual Iron Curtain. We met up early doors in the back streets of Croydon in a fine establishment called The Butcher’s Arms.  A top hostelry it was too and soon the talk turned to music.  A challenge was laid down.  How many songs could you name from Now That’s What I Call Music…the original double album from November 1983.  How many songs did Limahl actually have?  Well more than the “Never Ending Story” apparently. The debate continued down the road and onto the 11 minute train journey into the Surrey countryside before we alighted at South Whyteleafe.  And then we started the long climb up the hill to the ground.  Few locations are as picturesque as Whyteleafe’s ground and it is a shame that they survive on crowds of less than 100. With no time for a pre-match stiffner in the ample clubhouse we joined the queue (!) to get in. Whyteleafe 4 North Greenford United 3 – Church Road – Saturday 8th October 2011 As we paid our £8 and passed through the turnstiles, Danny turned to Damon and I and said:- 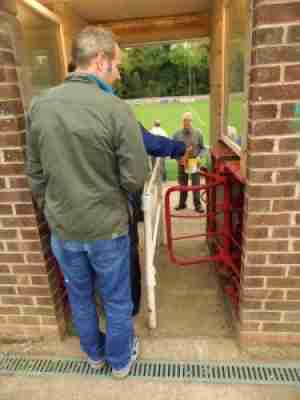 “I recognise these fella’s” pointing at the old turnstiles, “Unless I am most mistaken, which I rarely am, then these were from the away end at Stoke City’s Victoria Ground”. He was of course right, as he normally is.  They bought the turnstiles from The Potters in 1997 and installed them shortly after. As you can see those long winter nights just fly past when we are together. “But” I retorted “Do you know which current Premier League manager started his playing career on this very pitch?” Of course he knew….he knows everything. We were not alone in terms of the blogging community in Church Road.  Terry Duffelen, Graham Sibley and Gary Andrews, the former two actually season ticket holders, paying just £110 for the season or the equivalent of a ticket to see Chelsea v Arsenal and a programme at Stamford Bridge. Who said us internet writers are not influential eh?  Our presence had increased the attendance by 10% in a matter of seconds. The visitors, North Greenford United were having a similar season in the Evostik South Division One Central as Whyteleafe are in the Ryman League One South (phew).  The visitors are bottom of a very tight league, with 8 teams separated by just one win.  The Leafe are being held up off the bottom of the by three other sides, but it is fair to say that it has been a tough start to the season for both of them.  And judging by the play in the first half there was little to suggest this game would be anything apart from a dogfight for the £2,000 prize money. Two highlights stood out for me in the first half.  A huge well seasoned sausage in a french bread stick for £2 provided the fuel and a misplaced comment the amusement.  I think it is fair to say that it is rare you laugh so hard that a) coffee starts coming out of your nostrils and b) it stops an official doing his job.  Step forward Mr Damon Threadgold.  We had noticed that the linesman on our side of the pitch had something strange in his sock so as he ran past, keeping up with play, what Damon meant to say was:- “Oi, Lino! What have you got down your sock?” Unfortunately, and for some reason he still cannot explain, he said:- “Oi Lino! What have you got down your shorts?” I was standing next to Damon with my fetching Stade Francais hooded top. The linesman turned round and immediately looked in my direction, made a witty retort that is not for these pages, immediately putting our faith back in the whole respect campaign. We headed into the bar at half time and to be honest if there would have been a Carry On film on the TV we probably would have stayed in the comfortable surroundings.  But we had money riding on the game – well the golden goal anyway. So on 55 minutes we headed back in the ground.  As we did North Greenford United scored. 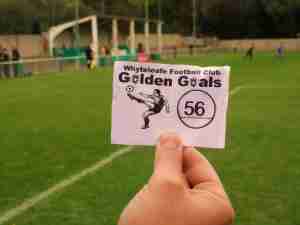 “Golden goal winning time is 56 minutes”…There was only going to be one winner – Danny Last. The goal from North Greenford’s Ricky Pither (a delivery driver) seemed to break the seal on the game and all of a sudden you couldn’t take your eyes off the pitch. The visitors continued to look the stronger of the two sides and came close to a second when Zak Joseph’s (student) lob from distance just went over the bar.  But on seventy minutes Joseph (student) made amends by smashing the ball home after some penalty area bingo. 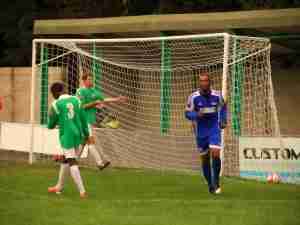 “Finish them off” came the shout from the North Greenford officials and the team responded with a well worked move in the 73rd minute when Joseph (student) tapped the ball home.  Game over.  Three nil up with just seventeen minutes to play. Whyteleafe brought on Stefane Gnamore to see if he could get any consolation for the greens.  He had an immediate impact, scoring in the 78th minute, and just 45 seconds later Scott Simpson scored again.  If this was in the Bet365 virtual stadium, Ray Winstone would be dizzy with his head-spinning odds selections. Just two minutes were left on the clock when Simpson scored again, to bring the scores level.  I am not sure we could cope with the tension, and word must have spread down the country lanes of CR3 as at least two more people had come to watch from the open gate. 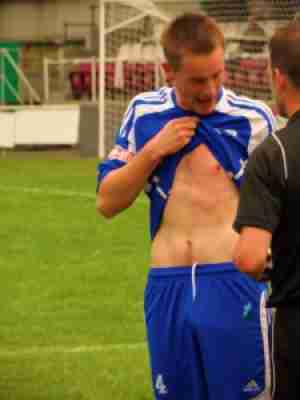 Time was ticking down and debate turned to whether there was replays or even penalties in the early stages of the FA Trophy.  Time for one last attack and the be-gloved Whyteleafe Fabian Batchelor (gloves????  In October???? 6 days ago in these parts the temperature was 28 degrees!) sent the ball into the area.  Greenford’s centre back, Nick Turner (Electrician) blocked the ball with his chest but a modest appeal from the home side saw the referee point to the spot.  The defender was livid, lifting his shirt and showing us his nipple, which was to be fair looking inflamed.  “Go on mate, take a photo, send it to the FA”.So I did, although I think they have more important things to concentrate on at the moment than looking at players nipples. But the decision had been made.  Had such drama ever been played out in front of the Gold Aviation stand before? (Sponsored by David Gold, although I think the Love Eggs Stand would have been funnier) I doubt it and Whyteleafe completed a truly remarkable comeback in the last ten minutes with Simpson slotting away the penalty to put them in the lead for the first time in the match with just seconds to go and complete a remarkable hatrick. 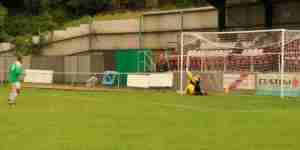 What a game! What an afternoon.  Seven goals in thirty four minutes for just £8 is some return. Add in a large sausage, some mildly camp banter with an official, a golden goal winner and a decent clubhouse and you have one top afternoon out.  My advice to you – get down to Whyteleafe to watch a game in the English countryside.  It will be the best tenner you will spend this season. More pictures from a great afternoon out can be found here.

A Gray day I could Ilford to miss

Some time very soon we will be up in arms about the death of another football club in London. It is a beautiful sunny Saturday afternoon at 3.05pm and I have joined barely 150 other payin...