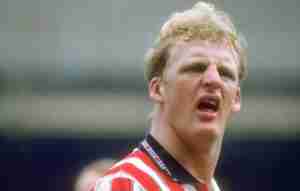 Bloody Iain Dowie.  We can’t get away from him!  Yesterday we were in Cheshunt where he started his career for the FA Cup tie with Southend Manor.  Today it was a trip to Hendon for the Ryman League game with Lewes.  Dowie made a name for himself at Claremont Road, scoring 47 times in less than 90 games for the Greens before Luton Town came knocking offering Hendon £30,000 for his services which is still their record transfer received. During the seventies and eighties, Hendon were a real force in Non League football. They won the FA Amateur Cup back 1972 and went onto the the Champions League equivalent the following season for European amateur football.  They also reached the third round of the FA Cup where they took Newcastle United to a replay after an amazing draw at St James Park.  The past decade has been harsh on the club with relegations and financial worries which led the position where they could not continue to fund themselves. Just two years ago Hendon were forced to leave their spiritual home at Claremont Road.  There are a number of reasons how and why this happened which is not for these pages.  After potential groundshares with Harrow Borough, Northwood and Staines Town were discussed, an agreement was reached with Wembley FC to share their Vale Farm ground. 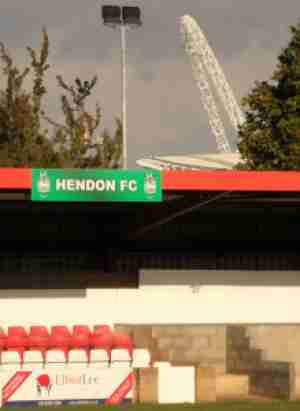 Vale Farm sits in the shadow of Wembley Stadium, yet the two venues could not be more different. Luxury at Vale Farm is a spot standing behind the goal and culinary delights are provided from a mobile van.  However, the pitch has always been a thing of beauty as opposed to the National Stadium’s one as was used by England for their preparations for the 1966 World Cup no less. Today they are a thriving Community-owned club just like Lewes.  In fact this was to be the first “All Community” game of the season and the crowds were out in force.  Not only was this a celebration of Supporters Direct in action, but it was also a great excuse to continue to celebrate Non League Day.  And that meant a chance to shake the hand of one of the three who played such a huge role in this year’s activities,  Cyndee Mitchell, the beauty behind this year’s success (Sorry Mike/James). If Sky Sports actually realised that football existed below the Football League then this game would have been the only choice for Super Sunday coverage.  Top of the table Hendon, with a 100% record versus pre-season favourites Lewes with 3 wins out of 4.  It was bound to be an absolute cracker.  And to boot it was a bonus game for Non League Day which had proved so successful yesterday. After the sunshine of yesterday we woke to the return of the proper English summer – rain. And not just a light shower, or some “drizzle”.  We are talking about a tidal wave of rain. On the drive up to the game via Central London streets were flooded, people were swimming in the streets and I was passed by a canoe going down Cheapside.  But we soldiered on through and pitched up at Vale Farm just before kick off.  Five pounds admission for showing my West Ham v Leeds ticket (realising some value I never thought would occur) and in place just as the two teams emerged. Hendon 2 Lewes 2 – Vale Farm – Sunday 4th September 2011 Well let’s start with the positives.  Lewes ended Hendon’s 100% record; the rain stopped and the sun came out and keeper Stuart Robinson didn’t get his leg broken. The negatives?  Well it can be summed up by two words – Benjamin Furneaux.  All we can hope was there was a referee’s assessor on duty at Vale Farm and Mr Furneaux, and his assistants I might add, get “re-assigned” for retraining. 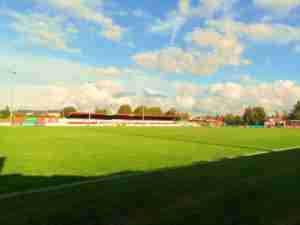 It started well enough for Lewes. Just two minutes were on the clock when Michael Malcolm snaffled (I love that word) the ball in the six yard box and Lewes were one to the good before most of the Rooks were out from the bar. GOOOOAAAAAAAAL shouted Big Deaksy, loud enough for Cynical Dave to hear.  Why would that be an issue, you may ask, considering Dave is such a loyal Lewes fan.  In fact he hasn’t missed a game for years.  Well today he did.  He was actually in a pub in Lords (Cricket, not religious miracle) sheltering from the rain.  Cynical Dave?  Fair weather Dave as Mr Marber said. As with previous weeks Lewes bossed the game, snaffling (that word again) out any threat from Hendon and trying to get the ball wide to Ciardini and Kamara.  If there was to be a second it was going to go in at our end.  That was until our friend the referee got involved.  With the half hour approaching, the linesman deemed that in the process of taking a drop kick, keeper Stuart Robinson had stepped outside of his area.  Harsh as the ball appeared to be in mid air at the time but perhaps if the official concentrated on penalising blatant foul throws with the same vigour it wouldn’t have been so bad.  From the resultant free kick Godfrey smashed a great free kick through the fragile Lewes wall to level the scores. 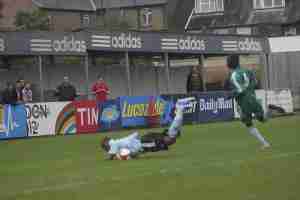 As I wandered around the pitch enjoying my burger I had a perfect view of Lewes’s penalty incident…or should I say lack of it.  Have a look at the picture on the right expertly taken by Mr Boyes.  Malcolm is clean through on goal.  The ball is not running away from him, and the number 6 is the last defender.  It would have taken a dive and a half to end up in that position should the offence have taken place outside the area, but that is exactly what the tin pot referee decided happened.  The linesman, who was bang on level with play and in front of me, and three substitutes also saw the incident but refused to flag, telling the subs that “It was the referee’s call”.  Sorry mate, you bottled the big decision.  So instead of a penalty and an hour against ten men, Lewes had a free kick against eleven. After a brief refuel in the club bar thanks to Narrow The Angle it was back to the action.  Again it was Lewes who looked the most dangerous and it was no surprise that the Rooks again took the lead.  It was that man Malcolm again, like a fox in the box, pouncing on a mistake by the keeper in handling a corner and smashing the ball home.  Two almost became three when Aaron Watson’s Ricky Villa-esque run was thwarted by a great last gasp tackle in the area. 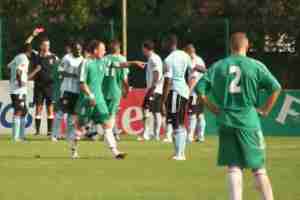 But the remaining action was to happen at the far end of the pitch.  Firstly Ngoyi was able to capitalise on some poor defending from a set piece for Hendon and he drove the ball home to equalise, and then substitute Aaron Morgan was red carded for a shocking late tackle on keeper Stuart Robinson.  Robinson was incensed with the tackle that left a huge gash in his sock and had to be restrained from getting physical with the Hendon player.  However, the referee then bizarrely booked Robinson for time wasting as he changed his sock.  If he hadn’t then his shin pad would have fallen out, which as we all know these days, is also a bookable offence! Lewes brought on new signing Nanetti (“In the” to his team mates) and his jinking run and shot was well saved by Laurencin to bring the curtain down on an entertaining game. 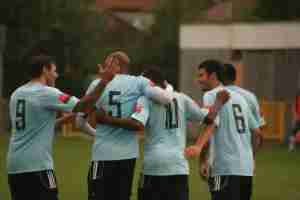 So Lewes brought the Green Dragon’s 100% record to an end, but must feel aggrieved that one man had such an influence on the result.  The good news was that the display had been the most positive we had seen this year, and the emergence of wide men galore in Ciardini, Watson and now Nanetti means Lewes will be a cracking side to watch this season. Next up – Aveley and possibly the best match poster of all time!. An alternative view can be found from this excellent website. More pictures from the game can be found here.
Share
Tweet
Share
Pins
Share
Like

Ex-Bayern Munich and Barcelona boss Pep Guardiola has admitted he expects huge backlash from critics if his team fails to get ahead to a good start in tonight’s Champions ...