How was it for you? Part 6 – Oh I do like to be beside the seaside

Share
Tweet
Share
Pins
Share
Like
Nicola Hudson brings us the rollercoaster ride that has been Southport FC’s season back in the Blue Square Bet Premier.  And who is to say the ride has come to a complete stop just yet… 2010/2011 has been a high octane season full of emotion at both extremes of the spectrum for the players, management and fans of Southport FC. With the campaign now over, Southport find themselves sitting fourth from bottom of the Blue Square Bet Premier league, occupying the last relegation place, and the sense of disappointment throughout both the club and the town is overwhelming. 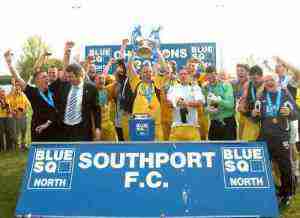 After becoming champions of the Blue Square Bet Conference North last season, the part-time Sandgrounders were always going to find this season in the Conference National challenging considering the calibre of the professional teams that they would have to compete against, but the nature of the defeat, with safety looking possible with ten minutes of the final match remaining, has left a bitter taste. Southport manager Liam Watson entered the 2010 campaign with a squad largely unchanged from the one that had secured their promotion at Eastwood Town the previous season. Only a handful of players departed, the most notable being striker Ciaran Kilheeney who, after two successful seasons at Port, signed for Conference North side Droylsden to be replaced by Matty McNeil of League Two Stockport County.

Port got off to a solid start to the season and, despite the loss to AFC Wimbledon at home on the first day, went five games without defeat, holding off teams such as Forest Green, Kidderminster Harriers and Cambridge United. September and October brought mixed results for The Sandgrounders although a worrying trend of negative results away from home saw the team slip toward the bottom of the table. Port’s success in the F.A. Cup however, meant the league took a back seat from the limelight as The Yellows were drawn to play Sheffield Wednesday at home in the first round proper, a game that was to be shown live on national television. As the country’s media descended on Haig Avenue, the atmosphere in the town reached fever pitch and a full ground gathered to watch the magic unfold. A twelfth minute goal from Wednesday’s Gary Teale certainly rained on Port’s parade but a rather sedate first half saw the score 1-0 at the break with plenty still to play for.

It took only seven minutes into the second half for Southport to make their mark on the game when a magnificent strike from Paul Barratt, later voted goal of the season, levelled the score to rapturous scenes in the stands. Although it would eventually be the Yorkshire club that made it through to the second round, the crowds were treated to six goals in twelve minutes where the plucky Yellows managed to equalise a second time via substitute Matty McGinn’s first kick of the game. The efforts shown in the F.A. Cup tie seemed to take their toll on The Sandgrounders and, after such highs, the comedown was a harsh one. The dark winter months of November and December brought with them the snow and some bleak times for Southport. Ten matches without victory, starting with a gut wrenching 3-2 loss at home to Bath City despite having a two goal lead at the break, culminated in a draw at Barrow on New Year’s Day. These were hard times indeed. Changes needed to be made and renewed hope came in the form of new signings, midfielders Karl Ledsham and ex-Everton reserve John Paul Kissock. Port also saw the departure of Ashley Winn who, after two seasons with The Yellows, signed for fellow Conference National side Gateshead, and it was at home to Gateshead that Southport would see an end to their dry spell. Kissock and Ledsham were major contributors to the 5-1 victory at home against The Tynesiders, giving Southport a new lease of life. A home win against Newport County and success in both Lancashire & F.A. Trophy cup ties briefly offered the promise of an upturn in form but ultimately it wasn’t to be and the run ended in a heavy 5-0 defeat at AFC Wimbledon. Port showed further signs of regaining momentum with goal-heavy wins against York and Forest Green showcasing impressive performances from additional recruits, winger come forward Shaun Whalley and midfielder Aaron Turner. The snow and various cup runs resulted in re-arranged fixtures and February brought with it a great deal of travelling for Port as they faced consecutive away trips to Hayes, Crawley and Bath and returned without having gained a single point. The distance covered and lack of success seemed to take it’s toll on Liam Watson’s team when, after gaining a vital three points at home to doomed Histon, they failed to capitalise and lost the first of what would be two defeats to bottom of the table Eastbourne Borough in what Port’s manager would later describe as the most disappointing results of the campaign. With the end of the season looming and Southport’s poor form on the road their Achilles’ Heel, it became clear that the battle for survival would come right down to the wire with their fate being decided on the very last game, away to Kettering Town. With a large contingent of travelling fans behind them, Port were only minutes away from remaining in the Blue Square Bet Premier before finally succumbing to a 3-1 defeat condemning the club to relegation by a mere two goal difference. Promoted to the league alongside local rivals Fleetwood Town, the paths of the two clubs have been contrasting . Wealthy Fleetwood spent heavily in the transfer windows to acquire a squad experienced in league football, invested in the rejuvenation of Highbury and the construction of a brand new stand, with their eyes set firmly on a future in The Football League after missing out in the playoffs this time around. By contrast, Southport languish in the drop zone, their only chance of a reprise hanging on the financial instability and potential collapse of clubs above them, a sad situation which lovers of the game would not like to see. Starting the campaign as favourites for relegation, the target being a finishing place of twentieth, meant that despite the eventual disappointment, Southport still had an encouraging season. The home win against Luton in March, the big wins against Gateshead, York and even the strong performance put in against league champions Crawley Town, culminated in a highlight reel that was only missing one further moment of heroics and one more point required for that fairytale finish. You will be able to follow Nicola’s pain next season follow Southport on The Ball is Round.
Share
Tweet
Share
Pins
Share
Like

Mbappe v Henry: A breakdown and comparison of their football qualities

Monaco’s hot prospect Kylian Mbappe has been beeping insistently on the radar of most of European’s top clubs this season. The young striker is in outstanding form, having sco...