Share
Tweet
Share
Pins
Share
Like
Nigel Henderson recants the moment that AFC Wimbledon completed their remarkable rise up the non league ladder. On Saturday evening, about 20 minutes before the world was due to end according to a well-publicised American preacher, I lifted my eyes up to the greying sky above the City of Manchester Stadium and asked the Man Upstairs for one last favour. As Danny Kedwell, the AFC Wimbledon captain, lined up the final of his team’s five penalties – one that would, should he score, clinch a “return” to the Football League for a club at least moulded in the Dons’ image, I realised that I wanted this more than anything. More than world peace, more than a successful and contented professional life, more even than dinner with Jennifer Aniston and whatever might follow over coffee at her Hollywood mansion – and even if it did mean eternal damnation. 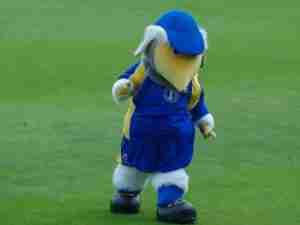 Kedwell did the job – as you knew the 25-goal striker just might – smashing the ball to the right of Mark Tyler, the Luton goalkeeper – and set off on a sprint of delight in front of the seating where the bulk of his team’s fans were massed. If the promised Rapture was not about to arrive for the world’s faithful, it had certainly arrived for the Wimbledon one. It was a pinch-yourself moment. I turned to my friend Kev, and we hugged in disbelieving joy. Kev is a Derby County fan but had been at my side at Wembley in 1988 when the “original” Wimbledon had beaten extraordinary odds and a Double-chasing Liverpool team to add an FA Cup victory to their meteoric rise from non-League in 1977 to the top flight. He had also been present at Bottom Meadow, when AFC Wimbledon had played their first competitive game against Sandhurst Town in the lowest league of senior football.

He was, I had decided, my lucky mascot – and an honorary Womble – and provided calming company on the long drive up. As we sung “It only took nine years”, an anthem of defiance aimed at the FA Commission’s scandalous decision to relocate the old Wimbledon to Milton Keynes, other fans unfurled a banner on the terrace behind the goal: “FA – FU” it read and perfectly reflected my sentiments. It made worthwhile the early trips in 2002 and 2003 to Hartley Wintney’s massively sloping pitch in deepest Hampshire, where we bought basic merchandise from the back of a converted ambulance nicknamed the Wombulance, as well as that to Merstham, where we broke, in one afternoon, the world record for consumption of cheese rolls kindly provided by an hospitable host club. And it totally vindicated the vision of the few who had turned up at St George’s Community Centre in the heart of Wimbledon two days after the FA Commission’s ruling to press the many – the rest of the fanbase – to embrace the idea of a new, reformed club. I’m partly ashamed now to admit that I was slow to adopt and adapt to the idea, arguing for greater effort to prevent the move, but was soon swept along in the tide of good, if angry, feeling. Back in Manchester I wanted to feel sorry for Luton – for their fans have known suffering, if not of the same type – but in the cauldron of noise and excitement I really struggled to do so. There was only room in football Heaven for a select few and it was those in the yellow and blue of Wimbledon that were the chosen ones.
Share
Tweet
Share
Pins
Share
Like

For my regular readers from California, Brentwood is not just a posh suburb in West Los Angeles, once the home of the world’s most desirable women, Marilyn Monroe. It is also a smal...