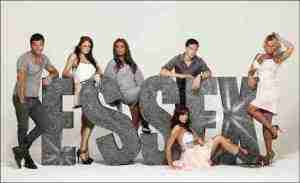 Caution casual surfers.  This post has NOTHING to do with that trashy reality TV programme of the same name.  I have no interest in the fake tans, fake boobs, fake accents and the lives of people from Britain’s most derided county (OK, fake boobs are alright if you insist).  Instead this is about football.  More specifically one of the biggest banker away victories known to man.  Runaway (ish) leaders against second from bottom in the Blue Square Bet South.  A team in form and nailed on for promotion against one that has lost heavily in four of their last five games. Hardly ideal current form, although it has to be added that the four games where Lewes have lost in have been against 2nd, 3rd, 4th and 5th in the league.  So it make sense to get Braintree Town, top of the pile, out of the way before the serious business of avoiding relegation can start again.

Not that Lewes are suggesting that this game is a foregone conclusion.  Far from it.  When the two sides met back in January, The Rooks can count themselves unlucky to come away from Essex with nothing at all after a narrow 1-0 defeat.  And of course there was the lucky omen coming into play.  Lewes had not lost a single game when the sun was shining…on a midweek game….this season….to a team beginning with B.  One has to clutch any straw at this time of the season. The Rooks forum was full of doom and gloom leading up to the game.  Knives were definitely out for the management duo of Tim O’Shea and Neil Smith.  Fans have very short memories and if they could remember back just 12 months then they should (and I repeat should) feel lucky there was still a team to go and watch. After this match Lewes have got seven games left, all against teams in the bottom half of the table (well, six plus one against current tenth) and all winnable.  So forgive me for closing the door on the proverbial fat lady for now. It wouldn’t be a normal week at Lewes unless there was a few new players arriving.  Last week Crystal Palace youngster Charlie Holness arrived on loan in time for the heavy defeat to Farnborough (trivia fact: Bob Holness was the first person to play James Bond in a 1954 radio production of Casino Royale AND his daughter was one of the members of 80’s one hit wonders Toto Coelo).  Prior to this game Joe Dolan arrived on loan from Basingstoke Town, although he is actually registered to Kingstonian. 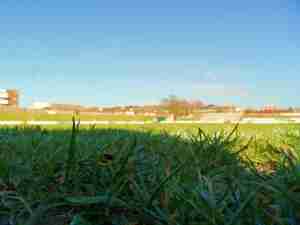 So the sun was shining, the ground looked marvellous and there was still a few beers left over from the Real Ale festival last week.  What more could a man want?  What about the love of a good woman?  That would be good, and as CMF had been away all week for business (I ask you, who would just abandon their family for work?) I was in need of some love and affection.  But that could wait until full time surely?  OK then let’s compromise on 3 lovely points.  Surely miracles do happen?  After all somehow Katie Price and Kerry Katona are still on tv and that surely proves it? Lewes 2 Braintree Town 1 – The Dripping Pan – Wednesday 23rd March 2011 At 9.37pm there was proof that the God of Football (will we one day know him as Blatter?) was alive and well and smiling down on a small town in East Sussex.  This was a shock result, make no bones about it.  Not because Lewes were down and out, nor because Braintree rode into town in their pink Cadillac as unbeatable giants but because the difference 4 days makes. Saturday the atmosphere was flat, the team lethargic and the clouds of depression hung overhead.  There was real doom and gloom in and around the club.  But the core of fans still believe.  They believe in what the club is trying to do.  One of my mantras in live is “Get Big, Get Niche or Get Out” and I firmly believe that the club is going for the nice option.  But all of the great stuff that is happening off the pitch requires some delivery on it, and with results marginally going in the favour of the Rooks on Tuesday night we knew a win would close the gap on 4th from bottom (and thus safety)  to one point.  One point from potential safety. 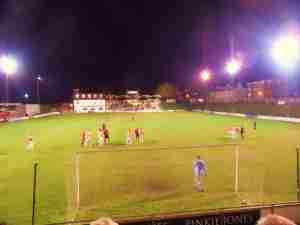 The evening had started well for me as I arrived earlier than planned into Lewes.  What could be better than the sun shining on an empty ground?  Well how about finding a ball and practising my 25 yard free kicks.  I was hoping that Jermaine Wright was secretly watching as his efforts from similar distances weren’t impressive at all.  I was quite pleased with my efforts, and capped off the session with a Ravanelli style shirt over the head celebration, to the bemusement of a few people who had entered the ground. Getting that out of my system I headed off, found Deaks and Cynical and started on the usual game of trying to work out the answers to Dave’s usual fiendishly difficult quiz questions (Q: How many times has the European/Champions League final been played in Britain, and name 6 Scottish Premier League players who have played for West Ham United, were this week’s posers).  LLF Premier League darts championship out of the way we were walking down St Swithun’s Terrace to the ground with all the talk of a draw being a good result. Words cannot describe the emotions of the next near two hours.  As if Jermaine Wright had been secretly watching me prior to the game he fired in a free kick from 25 yards (sorry, 22.86metres as I was correct on Twitter), which may or may not have got a touch from new signing Joe Dolan on the way through.  Boyesy said it did, after the game Jermaine Wright said it didn’t.  Who do we believe?  Who cares, Lewes were one nil up. Patrick reminded us that we had never lost after being one nil up this season.  I reminded him that we have never lost at home in midweek to a team beginning with B all season.  So what could go wrong? Braintree’s physical approach was difficult to watch as their defenders competed to see who could kick the highest clearance, with four balls sailing out of the ground in the first half alone. Town equalised in the 65th minute after a controversial free kick was turned in by Cliff Akurang, playing against Lewes for the third different team this season (Thurrock and Maidenhead being the other two) but that only spurred the Rooks on and both David Wheeler and Ben Hunt had chances blocked as they continued to press.  The atmosphere in the ground was building and there was a sense that this would be our moment, as Martine McCutcheon had once whispered into my ear (via headphones before anyone goes running to CMF with a tail of adultery). Chris Breach was denied a penalty after his goal bound header appeared to strike a defender’s arm and then Braintree almost went ahead when Glenn Poole’s shot across the face of goal bounced against the far post and into Winterton’s arms who knew little about it until the ball hit him in the stomach. Then with ten minutes to go Charlie Holness won a corner.  The ball was delivered into the ruck of players, it bobbled around a bit before David Wheeler, sorry, TBIR’s own David Wheeler stuck out a leg and diverted the ball into the side of the net.  To say the roof came off the terrace would be an understatement.  Beer was thrown in the air and Wheeler rushed to Deaks, Dave and Kev in a sight that would have terrified most mortal men.  As if that wasn’t enough, Nick Williams ran along the terrace to join in too.  That would be Chief Executive Office of Lewes FC Nick Williams.  None of this us and them on the terraces.  One for all and all for one in celebration of the goal (see video above) The final few minutes played out in midfield with little of the nerves we have seen in the past such as against Dartford or Bromley.  A final blast on the whistle brought hugs, cheers and massive applause from the 330 or so Lewes fans.  The hardcore.  The believers. 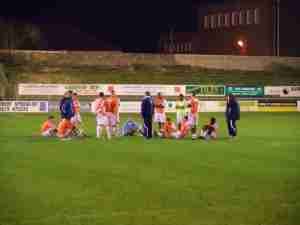 In the Rook Inn afterwards the beer flowed.  Reduced to £1 everyone was in the party mood. If there was an old Joanna (piano) I am sure there would have been a right ol’ knees up.  Jellied eels an’ all.  So one swallow does not make a summer, but one win breathes life, hope and spirit back into the team.  Braintree will go on I am sure to be there or there abouts at the end of the season.  But for one night only the only way for them to go was back to Essex licking their wounds after being savaged by a hungry story-telling of Rooks… For more pictures from the day and night click here.
Share
Tweet
Share
Pins
Share
Like

I thought I’d start today’s blog with a little sneak behind the curtain in the running of a football club. Not a Premier League club, but a proper grass roots club.  Before I got involved...