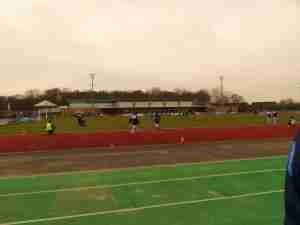 The thought of having to watch my football in a half empty athletics stadium is as appealing as watching a DVD box set of KerryKatona and Katie Price’s TV highlights. From significant experience of watching games overseas in grounds where you are up to 30 metres from the action I cannot remember one match which I can say was watchable when played in such a stadium. I’ve been to some of the best in the world – Berlin’s OlympiaStadion, Barcelona’sMontjuic, Istanbul’s Ataturk and Vienna’s Ernst Happel, and I’ve been to some of the worst – Rotherham’s Don Valley, Brighton’s Withdene and Moscow’s DinamoStadium. And the one thing that links them all is the fact that there is very little atmosphere, and this translates to the players.  Are you listening Sullivan, Gold et al?  Of course not. Our good friend Ian King wrote in When Saturday Comes this month about the real losers in the whole Olympic Stadium farce were of course the fans who simply weren’t consulted.  As a club member at West Ham I can certainly agree with that, never once having been asked my opinion about the move. Perhaps they should have spent some time lower down the leagues to see what it is like in England playing in such arenas? In the Blue Square Bet South there are some nice traditional stadiums such as Braintree Town’s, Hampton and Richmond Borough’s Beveree and of course the Dripping Pan. There are someidentikit newer grounds such as Eastleigh’s, Bishop Stortford’s and Staines Town. And then there is Chelmsford City’s Melbourne Park. 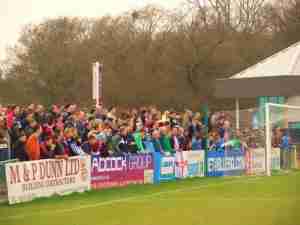 Yes I know the history, and yes I am sure the club are very pleased to have a ground to call home after their time as nomads playing in places likeBillericay, but it still doesn’t get round the fact that it is an athletics stadium. They had tried to be a bit different in the fact that behind both goals they had put in temporary small terrace areas so that fans here were close to the action, but the covered seats sat some 20 metres back from the pitch meaning binoculars were as essential as a scarf on a chilly afternoon in deepest, darkest Essex. CMF had declared today as a “Girls day out”, which initially I assumed to mean that she would be looking after the little Fullers meaning I could get the train to Chelmsford with the rest of the Lewes Lunatic Fringe and have a few beers. Oh no, “Girls day out” meant CMF and her chums going out from 12pm on the piss, returning with a thong of a male stripper in her pocket and whipped cream around her mouth at 3am. So the little Fullers would be also making the envious trip to Chelmsford. Not an issue for Lolly but for Littlest Fuller it meant I had to be a bit creative in selling to her the positives of watching football instead of shopping. I had amused her a few weeks ago on a trip to the El Grande Classico Paradiso, aka The Canvey Island derby at Concord Rangers when I told that I had been asked to count the official attendance, and if she did it then she would get 1 pence for everyone in the ground. She took a good half an hour to use her fingers and toes to tell me it was 178 and then demanding £1.78 as her fee. I gave her £2 before Lolly was able to tell her that the official attendance announced over the PA was just over a thousand. 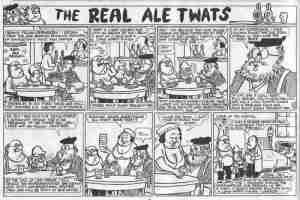 With away trips running out for the Rooks this was going to be one of the last of the season for the whole Lewes Lunatic Fringe. Chelmsford doesn’t have that many pubs that could tick all of our requirement boxes – dart board, decent beer, child friendly, buxom barmaids with low cut tops.  That is except the Woolpack, with its multitude of awards, games room and beers on draft such as Olde Skipper, Milk Street Amarillo and Wibblers. It was sure to be home to the legendary Viz cartoon characters The Real Ale Twats…and us of course for a couple of hours.  However, they missed one simple ingredient.  Food.  What pub in this day and age doesn’t do food. After we had asked another chap came in and then went straight out when told there wasn’t any fayre on the menu. So we headed north for a couple of hundred yards and ended up at O’Connor’s.  Decent looking bar, they served food (4 full Irish breakfasts please) and a nice beer garden gave us the Greek Island effect.  Two other chaps arrived, who had also ordered the breakfast.  First came the news that they had run out of eggs.  Then sausages, and finally the toaster was broken.  All highly embarrassing when ours arrived a few minutes later with said items on, plus what appeared to be a quarter of a burger (supposedly “White Pudding”).  Still it filled a hole. Ten minutes later we were pulling up in the Athletics stadium.  Danny and Dave flashed their Student cards but with the littlest Fuller’s in tow it didn’t worry me. “£18.50 please”. “WHAT?  I said one adult and two under 10’s” “Yes, that’s right.  Unless you want to go in the stands where you have to pay an extra £1 each.” “Hang on.  £18.50 is 85% higher than you would pay at Lewes.” “It’s average price in this league” “Er no its not” A quick look in the back of their own matchday programme confirmed that their next away trips to Maidenhead and Bishops Stortford would be £14 and £10 respectively for the best seats in the house. Begrudgingly I handed over my cash and we entered the ground.  In the distance we could just see the pitch, separated by not only an 8 lane athletics track but also the high jump and long jump tracks. “Get used to it Stu” Said Deaks as we looked onwards “This will be your view at West Ham in two years time, although it will cost twenty times more”. This game was the start of an unenviable treble of games against teams going head to head for promotion. With Farnborough Town (2nd) and Braintree Town (top) coming up next, this was the most “winnable” game on paper. And with the Rooks unbeaten away from home since mid January when they narrowly lost to Braintree Town hopes were high of at least a point from this one. Chelmsford City seem to be in the playoffs every season, and this year was no exception but they were fallible as recent results against Eastleigh and Hampton & Richmond Borough had proved. Yeah right…. Chelmsford City 4 Lewes 0 – Melbourne Park – Saturday 12th March 2011 This was painful.  Not painful because of the poor view, the expensive admission or even the scoreline but because if one or two decisions or chances went the other way it would have been a different afternoon. 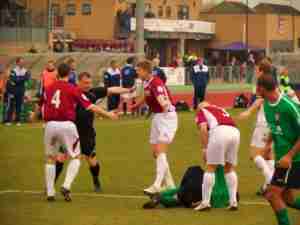 Lewes started the stronger of the two although once the ball went into the box there was no one there with any semblance of an attacking instinct.  Our Dave Wheeler had started this game and was a  thorn in the side of the Chelmsford left bank who took to bullying tactics.  All old school stuff.  Sly little kick, pulling him up by his shirt when he had clattered into him and generally annoying him. After the initial attacking flurry it was business as usual.  Winterton was soon called into action, making a couple of excellent saves from the unfeasibly tall Rob Edmans and Jordan Sanderson.  By this stage the little Fullers had headed off to the tuck shop to spend my money on Cola Cubes, Rhubarb and Custards and Sherbert Flying Saucers – a throwback to when football was so innocent. 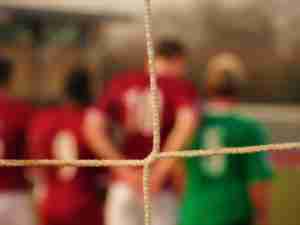 I have quite sure that my Golden Goal time of 17 minutes was a good one, but amazingly the Rooks held out until the 29th minute when a knock down wasn’t cleared in the box and Gray turned and shot only for Winterton to get a hand to the ball but still saw it trickle over the line.  One became two a few minutes later when DaveRainford’s mistimed header took Winterton by surprise and looked over him.  Game over?  Well, certainly in the first half. It was tempting to stay in the cavernous and impressive Supporters Bar after half time.  Whilst I have been disparaging about the ground and the pricing policy, there is nothing wrong with the Chelmsford fans who passionately follow their team and the ones I spoke to wished Lewes well. Lewes actually started the second half the brighter, although Ben Hunt, with hisponcy blue boots on needs to learn to stay on his feet.  Twice he theatrically fell to the floor, although it took him so long to reach the deck that the referee was already up the other end of the pitch.  The Rooks earned a couple of free kicks in decent positions around the box but seemed reluctant to shoot.

Twenty minutes to go andEdmans again showed how good his close control was for Peter crouch’s body double as he wandered through the defence, rounded Winterton and was about to shoot when the keeper took his ankle away.  There was no option for referee Quelch, who was up until this point quite frankly crap, but to send off the keeper.  And with no substitute on the bench it was Andy Pearson who stepped forward and put the gloves on.  And his first job?  Trying to save a penalty of course.  Which he didn’t and Rainford made it 3-0. 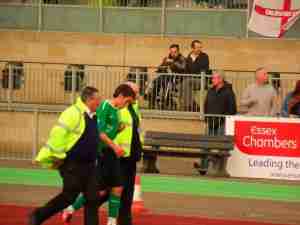 Five minutes later and Lewes’s tactic to try and get the game abandoned stepped up a gear as Jack Evans got a second yellow for, well, who knows.  RefereeQuelch again showed that he had no intention of refereeing at a higher level by being so inconsistent, allowing some crunching tackles to go unpunished (especially on Dave Wheeler) yet issuing two yellows to Jack”Kate Moss” Evans for his strong tackling.  To add insult to injury Evans had to be accompanied to the dressing rooms by not one but two stewards “just in case he went postal” so another steward told us.  Jobsworth more like. So ten minutes left and only two more red cards needed.  Although the plan seemed to change when Callum Davies decided to aim an inch perfect shot into the corner of the net, although perhaps he shouldn’t have chosen his own one for his first goal of the season.  Four nil, and enough was enough. It had been a painful lesson and an insight into the future that I didn’t like.  Athletics stadiums are for athletics, football are football and never the two should meet. More pictures from a bad bad afternoon can be found here.
Share
Tweet
Share
Pins
Share
Like

For most Non League sides the difference between success and failure in a season can be found in their pre-season calendar.  One or two big name friendlies can add anything up to 20% to t...