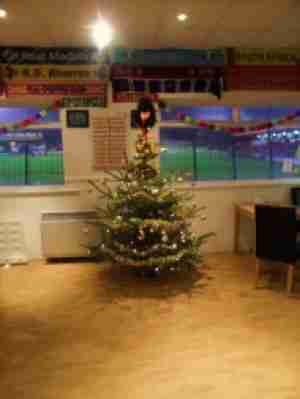 Why let the pesky weather get in the way of your Christmas?  Well in the case of Lewes FC it doesn’t.  We were all very excited in the extended Fuller household at Christmas to be making the trek down to the Boxing Day game with our Northern cousins (aka Northern Steve and young Liam) for their first ever visit to The Dripping Pan.  But then the weather got in the way and we were forced to watch a complete box set of Glee instead – hardly a fair trade. The game against Ebbsfleet was duly re-arranged for mid February and 99% of clubs would just have republished the programme with a photocopied insert and be done with it. But this is Lewes we are talking about so we like to be different. And so the directors decided that Christmas would not be cancelled and simply shifted it by nearly two months.  All were welcome, Santa hats certainly obligatory.  The club even went as far as making a promotional video to encourage people to attend.  My only concern was whether the mince pies may have fermented since being kept from Boxing Day? This was to be my seventh game in just ten days.  Was I bored with football yet?  Not a chance and as I battled my way through the rush hour gridlock on the M25 I thought that this game could be a defining moment in the Rooks season.  A win tonight and it was possible to leapfrog over a number of teams and into safety.  But as we know, “if” and “and” make odd bedfellows (like Eddie Murphy and Scary Spice I always feel). Lewes 0 Ebbsfleet United 3 – The Dripping Pan – Wednesday 23rd February 2011 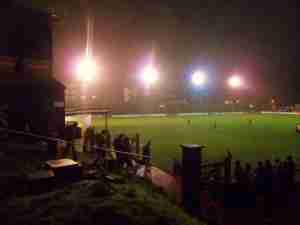 Baaah Humbug.  Ebbsfleet became the Grinch that stole Christmas, taking all three points in a game played with swirling mist all around the Christmas decorations.  Three nil flattered them but they took their chances, whilst Lewes didn’t build on the possession they had, especially in the second half. Lewes faced a bit of an onslaught in the first half and the long ball game employed by Ebbsfleet meant that the Lewes defence had little respite although David Wheeler was a constant thorn in the side of Ebbsfleet’s keeper.  However, despite Lewes’s strong backbone, and attacking flair with Noel and Taylor it was Ebbsfleet who took the lead in route one fashion.  A long punt upfield by keeper and Ashley Carew squeezed between Chris Breach and Sonny Cobbs to slot an angled shot past Chris Winterton. 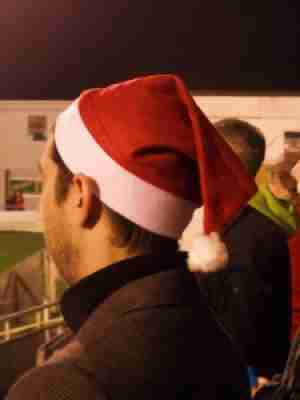 It was strange that Lewes attacked the Jungle in the second half, as in all my times of watching them this had never happened.  The crowd on the terrace was swelled with at least one Santa Claus (because kids there is only one, right) and in truth Lewes took the game to the visitors with Ebbsfleet riding their luck during a couple of goal mouth scrambles.  ToSH wanted at least a point so took off Anthony Barness and introduced a more attacking formation.  It had two effects.  Lewes peppered the Ebbsfleet goal mouth but simply could not find a way through, whilst they looked more exposed to the counter attack. And it was this shortage of numbers that led to two late goals by Ebbsfleet as first Calum Willock took advantage of another route one approach with a fantastic finish and then as the game entered injury time Carew scored again to send Ebbsfleet into 2nd place in the table and to leave the Rooks clearing up the wrapping paper and putting Granny’s jumper back in the draw. A set back to the fight that is all, no more, no less.  Bring on Woking on Saturday is what I say! More photos from the evening can be found at our Flickr stream here.
Share
Tweet
Share
Pins
Share
Like