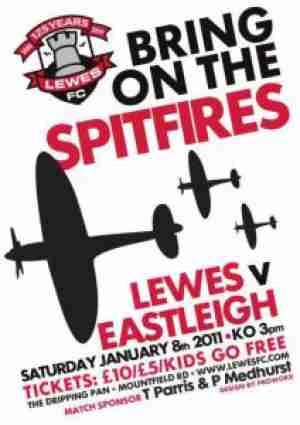 A week is a long time in football, but 5 days is even less.  That is the time lapsed between the 600 or so Lewes fans leaving the Dripping Pan on Monday after the defeat to Welling United, and the same group arriving back for the visit of Eastleigh. There are must win games, and there are real must win games.  This was one of the latter. It will have almost certainly escaped your notice (unless you are a die hard Lewes fan) that things on the pitch for the Rooks have not gone well since the end of November.  The euphoria of the new management team of Tim O’Shea and Neil Smith has slowly ebbed away and a spate of injuries, suspensions, departures and in one case, retirements have caused headaches on the pitch.  That is when the team has been able to actually get onto a pitch to play, with the Winter weather wiping out 4 weeks worth of fixtures. When they have been able to play defeats to Thurrock, Dover Athletic, Ebbsfleet United and Welling United have sent the Rooks back into the bottom three. With games on the horizon against Staines Town, St Albans City and Borehamwood there was hope.  And unlike the “glamorous” Premier League there was no calling for the manager’s head down in Blue Square Bet South.  Instead there was a measure of calm coming into the game versus The Spitfires.  In the past two seasons these teams have played four times in all competitions, with each game being keenly fought, and three of the four decided by a single goal.  Would it be the same today?  My money was on a sneaky 1-0 Lewes victory. As a birthday treat CMF agreed to drive me down so that I could have a beer.  In fact this was to be my first visit to the Pan since the end of October due to a number of reasons.  I was due to meet Chairman Ibbo for a catch up and an interview for the book.  Ah yes, the book.  For those who didn’t know there is a book in the making.  Working title is “Rooking all over the world”, and it tells the story of this crazy season following Lewes.  When is it out I hear you say at the back of the room?  Well around August time I think?  And where can I buy a copy?….STOP THAT NOW! 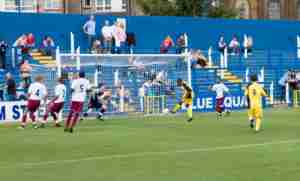 Midweek had brought the usual spate of comings and goings at The Pan.  Tim O’Shea had got his vast black book out and managed to negotiate the transfer of ex-England C international winger Ishmael Welsh from Grays Athletic. Welsh had played under O’Shea at Grays in the Conference Premier before moving onto Ebbsfleet United last season.  Interesting enough he would potentially be competing with two of Lewes’s most talented youngsters – David Wheeler and Tom Murphy. Lewes 1 Eastleigh 4 – The Dripping Pan – Saturday 8th January 2011 The omens weren’t good for this from the moment we arrived at the ground. The Eastleigh team had arrived early, taking advantage of the prime spots in the Rook Inn for the televised Arsenal versus Leeds United clash. One solitary rook sat on the penalty spot, almost mocking us that today would be another world of pain. The good news was that Harveys Old Ale was back on draft. The bad news? Well, we will put that to one side for a few more minutes. 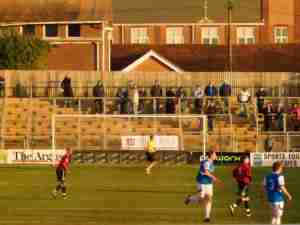 I was joined just before kick off by Deaks, Cynical and Kev. Danny had decided that the “Magic of the FA Cup” was too good to miss and was taking his place at the worst ground in England, the Withdean, for Brighton’s game versus Portsmouth. The talk was of the forum, and the criticism being levelled at Tim O’Shea. People simply have no perspective on football, being completely subjective. Let’s face it. Lewes have been in a relegation battle from day one, and the sooner they realise that, the better. This was going to be a tough game. Eastleigh had been punching above their weight on a style that was built on their physical presence. One look at the teams as they emerged onto the pitch confirmed this. 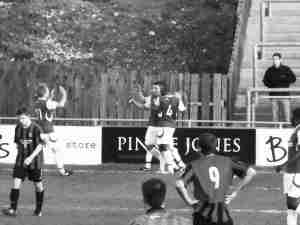 Lewes had started with a very attacking formation with Murphy, Wheeler and new signing Welsh pushing forward from the first minute.  And it seemed to work.  The team looked bright, full of energy and played with confidence that hasn’t been seen for a few weeks.  New signing Welsh put a couple of decent crosses in the box and it was a miracle that Godfrey didn’t put away one of these chances when he found himself unmarked in the six yard box. But then it became same-old, same-old.  An Eastleigh player was hit hard on the halfway line and Lewes froze, expecting a free kick to be given, but the ref waved play on.  Barness, was one of those caught out and he allowed the Eastleigh winger to control the ball, cross it and Danny Smith headed home with ease.  With only twenty or so fans having braved the 657 line via Brighton (Portsmouth were playing at Brighton in the FA Cup) you could hear the collective groan from the terrace. 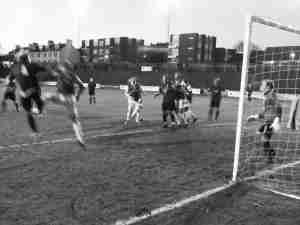 You could see the Rooks players heads go down.  Only once this season have the Rooks gone behind and then got something out of a game and it was as if the team knew it.  Eight minutes later their wishful thinking came true as Brett Williams finished with aplomb after the ball was not cleared in the box. Two almost became three just before half time but the one player who seems to realise the club need to fight Chris Winterton was switched on to the danger and saved superbly to keep the score relatively respectable. It was tempting to stay in the warm Rook Inn at half time.  After all I had a bit of maintenance to do on the scarves and I could have so easily got on with that.  But in for a penny, in for a pound I was back out to support the club.  O’Shea tried to narrow the game but this only served to isolate Wheeler and Welsh and they had to go looking for the ball instead of it coming to them out wide.  The situation got even worse within fifteen minutes of the restart as firstly Tony Taggart and then another Williams strike (albeit one with a large Breech deflection) doubled the Eastleigh lead to four. 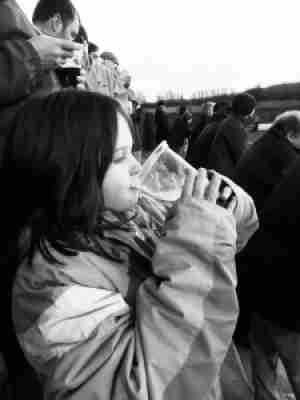 To stay that we were stunned was an understatement.  The fans hadn’t seen an away team rip apart Lewes at the Pan for many a year and it could have been more.  On 65 minutes Barness played a ball over the top, Murphy beat his man, rounded the keeper and slotted home.  “We’re gonna win 5-4” was the call from the terrace up until the final whistle but that sort of thing never happens to teams I support.  Five consecutive defeats (six including Margate) now put the club in real trouble.  The realisation that the league for Lewes was essentially now between five teams (Thurrock, St Albans, Borehamwood and Dartford being the others) started to sink in for everyone.  Results elsewhere would become irrelevant.  It is as simple as that. Despite all of the pre-match optimism the Rooks had been shot down with ruthless efficiency by the Spitfires.  Next up?  Only a trip to the league leaders Braintree Town.  A walk in the park. For more pictures from the day head over to our Flickr channel here.
Share
Tweet
Share
Pins
Share
Like

Two facts that you may not know about Goole. Firstly, when you type it into any Apple device, it will try to suggest to you that you really meant Google, and secondly it’s bloody cold. I ...