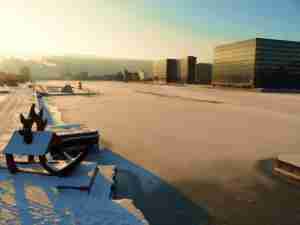 Now if you are reading this it means that for once Easyjet actually managed to fly one of the those airplane things from Copenhagen to London Stansted on time (and if not you have somehow broken my tough password for the admin area of my blog).  That may sound easy but in the last few weeks they have failed to do that on a number of occasions, often simply leaving passengers holding their boarding cards at 1am in a strange airport as they announce the flight is cancelled.  Personally I have voted with my feet, so to speak, changing my weekly commute to BA, but on this occasion as the whole family were flying back from our New Year revelries in Denmark, it was Hobson’s choice. And of course assuming they did get me back on time it was dependent on our loveable Border Control people at Britain’s least favourite airport, Stansted (I refuse to use the moniker London for an airport two counties away from the capital) realising that they need to have appropriate numbers of staff to cope with the number of airplanes landing. Oooh – bitter aren’t I, and 2011 is just a few hours old as well.  Once a grumpy old man, always a grumpy old man as my dear Nan used to say. 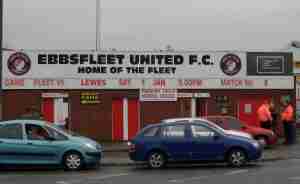 So, assuming everything was on time then at 2.30pm I would be walking through the turnstiles of Stonebridge Road, home of Ebbsfleet United ready to watch Lewes try and claw their way out of relegation trouble.  This was always be a game that the Rooks would have marked up as a zero return one.  Ebbsfleet had surprisingly been relegated on the last day of the season from the Conference National last season, and few would have backed against them making an immediate return.  With their games in hand due to the poor weather, the club would have been within a point of Braintree Town at the top of the table, whilst Lewes would have been bottom if Borehamwood and St Albans City would have played all of their games. 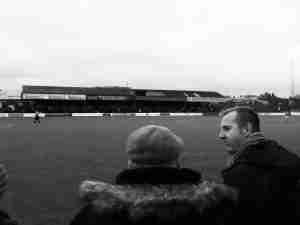 So virtual top versus virtual bottom was not the start that Lewes probably wanted to 2011.  2010 had been a bit of a nightmare to say the least, starting and ending the year with defeats away to Dover Athletic. In between quite a few bits that the fans would want to forget, although there is still a sense of optimism about what the club is trying to achieve on and off the pitch. Due to the weather, this was to be our first Lewes game in five weeks.  In that people they had played just one league game (versus Dover on Tuesday) so you could understand some of the rustiness the team will have felt.  It also has an impact on the fans too, with double handbag winner Deaksy (he won them both in the Lewes Christmas draw if you believe him although why he has to now take them to all away games “just to tell people” is baffling) and Cynical making their second trip to Kent in just a few days. 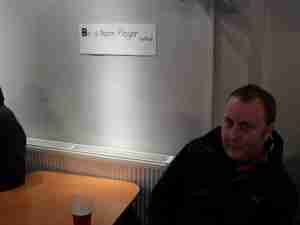 My first “hats off” award for the New Year goes to Ebbsfleet for charging just £5 for adults and £1 for children for this game.  Coming off the back of the bumper attendance for the “keenly fought” local derby with Dartford where the crowd was well over 2,000, they could have been complacent and kept admission the same, but instead they slashed in.  The club are still groaning along under the control of Myfootballclub.  The internet fad that had started off with such a bang back in 2008 had lost its way in recent months and it was clear from standing in the bar pre-match with signs placed on the wall that every penny counts now, and the club is absolutely desperate to get back into the Blue Square Premier. Ebbsfleet United 1 Lewes 0 – Stonebridge Road – Saturday 1st January 2011 After the goal in the first minute at Dover Athletic on Tuesday the travelling dozen or so fans breathed a sigh of relief when the big hand passed the sixty second mark.  O’Shea had put out an attacking side with George Porter and Paul Olima up front, and David Wheeler back in his favourite advanced right midfield role.  And despite the gap in points and league position, Lewes took the game to Ebbsfleet, pushing them onto the back foot as the ball pinged around a wet midfield.  The highlight of the opening ten minutes had to be my very tasty jacket potato with chilli from the food cabin – a highly unusual combination to be found at a football ground, and served by a girl who was talking on her mobile throughout the transaction.  Was it wrong of me to wish she would drop her Blackberry into the steaming hot pot of chilli? 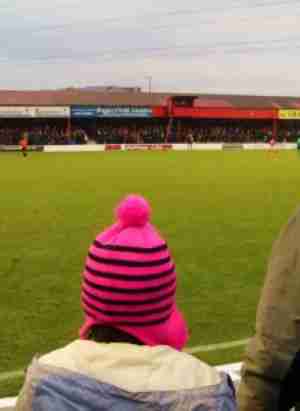 Lolly was not impressed and decided she wanted chips and went across to the other side of the ground to queue there, as too did the Rooks2 (Patrick and Charlie on duty today) who didn’t like the rain.  The first bit of excitement came when Deaksy found his hot sausage roll was actually frozen in the middle.  He took it back and waited for another for a few minutes, before one of the girls actually asked him if he wanted a replacement, or was he just there as a public service announcement that frozen pork is not good for the stomach (Charlie says, for those old enough to remember). But back to the football.  Ebbsfleet came close to opening the scoring on 12 minutes when Anthony Barness had to clear off the line, and then huffed and puffed for the rest of the half.  Apart from a shot from distance by Nathan Green in the dying seconds of the half it was relatively tame…for tame read dull.  And for those amongst you questioning my parental responsibilities, I didn’t just leave Lolly queuing up for 35 minutes on her own in the rain, I did go to the bar and get her a Coke (and then went back into the bar myself). 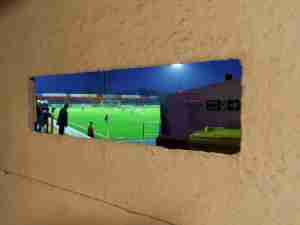 The second half started much the same as the first really.  Ebbsfleet tried to push forward but Lewes’s defence, bolstered by new signing Stephenson seemed to be able to cope with their approach.  Fleet managed Daish made changes on the hour mark, bringing on Scott Ginty whilst ToSH had to take off the injured Porter, replacing him with live wire Tom Murphy. Lewes seemed to have done enough to get a point as the game entered the final few minutes.  However, they were to leave empty handed as for the seventh away league game this season (out of eleven) they were to lose by a single goal. 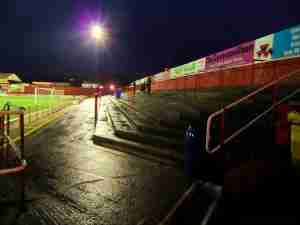 An uncharacteristic mistake from Hutchinson allowed a cross from the right to evade him and grateful sub Scott Ginty was able to capitalize and turn the ball past Winterton, much to the delight of the whole team with even Edwards running half the pitch to join in the wild celebrations. Ironically, Lewes made the most of the closing moments. Substitute Tom Murphy was just beaten to a long ball by keeper Edwards, but in the next attack, a hopeful punt upfield found its way to Murphy again but his clever angled near-post header was pushed away by Edwards to preserve all three points for the  hosts. Lewes’s rotten away form in the Garden of England continues.  It is now almost three years since the Rooks won in Kent, and with three defeats out of three so far this season, with only Dartford still to face the hopes are not high to stop that run. So my mammoth 643 mile trip to a football match was over, and it was the train back home for me.  Easyjet had been on time.  Stansted airport had treated me well.  The M11/M25 had been as calm as a mill pond now could SouthEastern deliver for once on a cold wet night?  Amazingly they could.  A perfect day apart from the three points we all so badly needed. More pictures from the day can be found at our Flickr stream here.
Share
Tweet
Share
Pins
Share
Like

About Alwyns Lane The club has played at various locations within the parish (Willow Walk, Free Prae Road, Staines Lane and Chilsey Green) before settling down at the present Alwyns Lane...