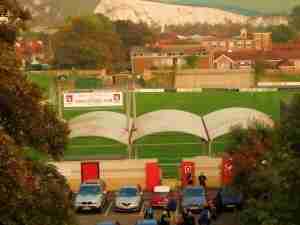 Integrity versus loyalty.  Always a very difficult decision.  For the TBIR team we faced a big dilemma this weekend as to where we should nail our FA Cup colours.  Our heart said Lewes v Thurrock, our head said Whitehawk v Hendon.  We are committed to bringing you the best in the Non League action across the country and the qualifying rounds of the biggest cup competition in the world allow us to rove to pastures new.  The 3rd Qualifying round was a perfect example of this, but we now have our deep affiliation to Lewes and so when the draw threw up a winnable home tie with Thurrock I felt a pang of guilt that I wouldn’t be going. But then the full draw became clear in the FA’s crystal ball and just 6 miles away as the Rook flies was a new ground, a new club and potentially a new adventure.  Whitehawk.  We immediately contacted our Head of Research and Development as to how we could be at two places at once without affecting the Time/Space Continuum and after a few Fuller’s Honey Dew Ales he came up with the solution.  Unfortunately a pending patent stops us revealing the actual solution here, but rest assured there was no smoke or mirrors. When I told people I was heading down to Whitehawk everyone who knows Brighton looked at me as if I was mad and shook their head.  “Lock your car doors“, “Make sure you don’t wear your watch“, “Don’t forget your bullet proof vest” were three such comments.  But as a veteran of Zagreb, Bratislava and Arbroath it was water off a ducks back to me. 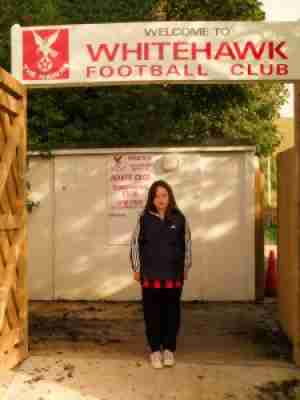 We drove down the Falmer Road, past the impressive new American Express Community Stadium which will be Brighton & Hove Albion’s new ground in just a few months time on a beautifully sunny day.  The road takes you high above Brighton, with the road falling down towards the sea.  A quick right along the top of Brighton racecourse and the a left literally across the track and down the hill.  So far all I saw was neat bungalows and smiling children playing in the sunshine.  As you get near the bottom of the hill you through a left, drive past the Caravan Club (a code word for a massive orgy according to Jay in the Inbetweeners) and there is the ground, hidden behind the trees.  So where exactly was this war zone? We parked, paid our £8 and walked into one of the most rural grounds in England.  From all parts of the ground you simply cannot see anything apart from greenery.  The club after nearly 50 years since their formation had at last left the county leagues, having won the Sussex League last season.  They were also just one game away from Wembley in the FA Vase last year, losing to Wroxham in the semi-finals.  They were also managed recently by ex-West Ham legend George Parris.  This game against Isthmian Premier League Hendon marked their joint furthest progress in the competition.

Fanny’s was the obvious choice for a quickie prior to the game, and full sated we took our place behind the goal.  The pitch must be a nightmare to play on.  It seems to slope in all directions, and is bloody wide – a fact that the home team tried to exploit from the first minute with long cross pitch balls.  FA regulations meant that no alcohol could be taken out from the bar, but that didn’t stop a number of fans who simply brought out the cans from their bags as if it was part of a normal country picnic. Whitehawk 1 Hendon 2 – Wilson Avenue – Saturday 9th October The game started at a pace with some full blooded tackles flying in.  The winners of the game would get £7,500, which is the equivalent of an additional 10 games gate receipts for Whitehawk and they made the best of the early play, putting the young Hendon keeper Laurensin under pressure.  Whitehawk’s main threat up from came from Joe Gatting, son of Steve and nephew of Mike giving him something to live up to.  He had the first chance of the game after being put clean through in the tenth minute he let the ball over run and couldn’t get his shot in.  Almost immediately Hendon went up the other end, and with their first chance Ate-Ouakrim slotted home when given too much room in the area. 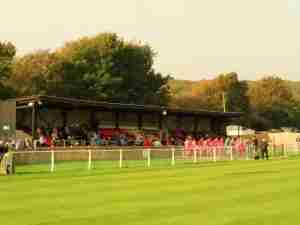 One thing that did strike me as unusual about the ground was the “paddock” area in front of the main stand.  This fenced off area simply caused problems when the ball bounced into it, and no one could get it back easily.  It was almost like a gold enclosure at Ascot with us mere silver ticket holders having to stand outside it to watch the game.  But five minutes before half time the home fans forgot about such trivialities as Paul Armstrong levelled the scores. Lewes 2 Thurrock 1 – The Dripping Pan – Saturday 9th October So whilst the sun was shining in East Brighton, just across the downs Lewes were kicking off against fellow Blue Square Bet South strugglers Thurrock.  The Rooks only league win this season was against “The Fleet” back in August, and they intended to do the same, starting with two men up front for the first time in a while. 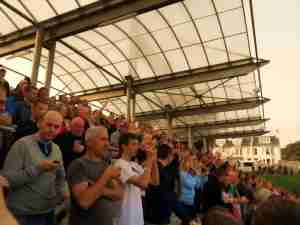 And the tactical switch worked early on as Tom Murphy headed home a pinpoint cross from Kane Wills.  Director Patrick Marber whispered in my ear that Lewes haven’t lost after taking a lead for six months and thoughts started turning to the next round, and the dilemma of a winnable tie, or a big team at home such as Luton Town or Cambridge United. The atmosphere had been boosted by the presence of the Cliffe Bonfire Society drummers, who drummed their life out, taking the team into half time with a slim lead. Back over in Whitehawk it was Hendon who started the second half the stronger and substitute Aaron Morgan put the greys ahead before many of the fans had withdrawn from Fanny’s.  Morgan then picked up an injury and was replaced by Michael Peacock.

In one of those amusing for the fans but bloody annoying for the team moments, Peacock lasted just three minutes before he picked up an injury, and the player we had all come to see play came on – Danny Dyer.  Unfortunately (or fortunately depending on what you think of his work) it was not the cockney actor who thinks every situation is going to get “a bit naughty soon”, but Hendon’s midfielder.  There was time though for Jamie Busby to pick up a second yellow in injury time and give Whitehawk a glimmer of hope but it was not to be.  With the afternoon walkers descending the hill above the ground, the referee brought an end to proceedings and the hopes of a famous home win. 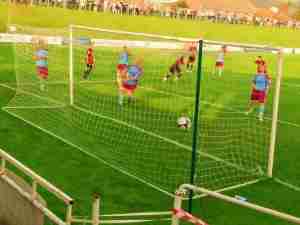 Meanwhile, back in Lewes City (a nod there to Batman for those not old enough to remember Adam West in tights), the Rooks were still playing with confidence.  In a day for namesakes, Lewes full back Lewis Hamilton fell awkwardly and was taken off with his arm in a sling (later diagnosed as a break).  Our sponsored man David Wheeler came on as sub, himself still getting back to full fitness after a stop/start campaign and teed up Tom Murphy perfectly for the second goal with fifteen minutes to go.  The Wheeler curse struck again a few minutes later as he was injured in a tackle with the Thurrock left back, and Lewes were down to ten men to hang on. Every Thurrock attack was greeted with mass nail-biting but Winterton in the Lewes goal seemed to be unbeatable.  It would take something special to beat him, and that is exactly what happened in the 87th minute.  James Boyes, Lewes’s man on the ground summed it up perfectly – “It was a goal fit to grace any level of football, with the winger chesting the ball down in a goal-mouth scramble, before sending an unstoppable overhead kick past Winterton to give the visitors hope of snatching an underserved replay.” 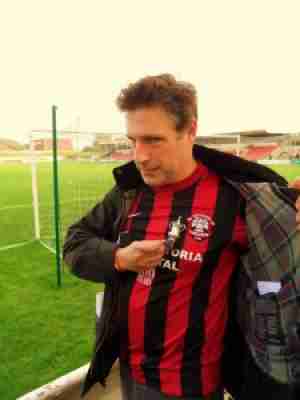 Four minutes of added time were announced and we counted down every second.  When finally the whistle went, the 850+ crowd raised the noise another notch and the new owners of the club celebrated with the fans, as well as a big group hug.  This was progress, and whilst the Que Sera chants of Wembley may be a bit premature it could well be “Whatever will be, will be, we are going to Grimsby Que Sera, Que Sera.” Two winners, two losers and a break through in trans-space particle acceleration.  Not a bad afternoon’s work! More photos from our day of time travel can be found at our Flickr feedhere.
Share
Tweet
Share
Pins
Share
Like

Koscielny reveals childhood idol, and he is English

Arsenal defender Laurent Koscielny has revealed his childhood hero and to the surprise of many he is not French but English. Among a star-packed France squad he could have&nbsp...