WELCOME BACK TO THE DARK DAYS OF FOOTBALL – Boreham Wood FC

Share
Tweet
Share
Pins
Share
Like
1st May 2010 should go down as the most memorable date in the history for Boreham Wood FC for the reason they finally won promotion to step 2 of the non-league football pyramid.  Unfortunately it wont, or at least by the vast majority of the 1,100 fans who were in the neat and tidy Meadow Park ground on Saturday.  It will be remembered for an assault on the Kingstonian captain, Francis Duku after a fan ran onto the pitch in the 50th minute. 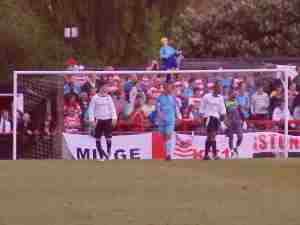 I do not know what is worse.  The fan that this individual felt he could and should take such action, or that the club have so far simply glossed over the fact.  A look on their home pagesimply mentions the win that elevates the club to their highest league position in their 62 year history, yet nothing about the incident, or the number of fans who continued to encroach onto the pitch before the final whistle.  It is also quite a while since  I have heard songs such as “No Surrender” sung at a domestic game in this country, quite what the group of “fans” were trying to achieve was beyond me.  One can only hope for the sake of the club that the crowd yesterday, swelled by nearly four fold, contained the elements that wont be returning next year. It was interesting to see that the club had used segregation in the ground and the police presence was high for a club of this size, as if they expected some incident.

So Boreham Wood, assuming the FA will do absolutely nothing about the incident, will take their place next season in Blue Square South alongside the likes of Ebbsfleet United, Dover Athletic and local rivals St Albans City – which I am sure will be a quiet affair.  Ian Allinson’s team deserve credit for their recent form that had taken them into the play offs and then pulled off a shock win away at form team Aveley in the semi-finals.  Kingstonian can look back at a season where for so long they had been in second place with some pride as well, considering they were only promoted 12 months ago. Boreham Wood 2 Kingstonian 0 – Meadow Park – Saturday 1st May 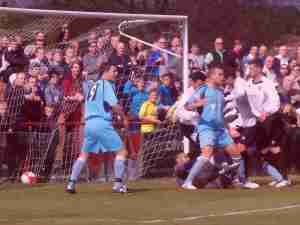 With so much riding on such games, they are rarely any good.  I have to say that this one was the exception.  Both teams went on the attack from the first minute and I would not have liked to have had a bet on first team to score in the opening period.Boreham Wood, despite finishing the season one place above the visitors,  had not beaten Kingstonian this season.  Yet they should have taken the lead when Chris Watters header flashed narrowly wide as too did the very impressive Ryan Moran. A rare half time treat was a visit to the “Burger Bar”, which amazingly when we arrived had run out of burgers.  However, our tattooed and pierced hosts soon conjured up some more non-league delights including some handy glass bottles of J2O – nothing like adding petrol to the flames.  By this stage we had moved from behind the goal.  The growing ban of Burberry and Stone Island is not an uncommon sight at games in England, but to see it here was unusual.  as we have mentioned, this is a club who get an average attendance of just over 250.  Yet here was a group who “hated Barnet” – who actually hates Barnet?  How can anyone hate Barnet?  A small, almost non-league club themselves (well they could be in a week’s time!) who are hardly known for saying boo to a goose.  The goading of the opposition keeper is a ritual at non-league games.  They poor individual has nowhere to hid and it is obvious that the comments are directed at him.  But these were bizarre.  One group of fans kept calling him “Sweetheart”.  I assumed his name was something like Darling, but how do you get Sweetheart from Tolfrey?  Normal service was resumed when a young teenager next to me informed him that he (the kid) had “Shagged your mum up the arse and then your Dad tried to suck me off”…As a responsible parent should I call Childline? 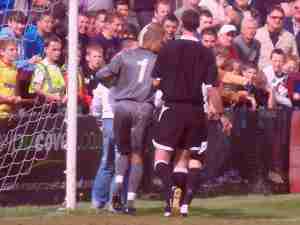 The second half was barely five minutes old when the main talking point occurred.  From a Kingstonian corner the ball ended up in the net, but the referee ruled that Duku had fouled a Boreham Wood player.  To many this “foul” seemed to actually be a deliberate elbow and the referee was ready to take appropriate action when a “fan” hurdled the fence and appeared to punch the Kingstonian captain before trying to escape. Boreham Wood’s keeper, Tucker tried to catch him and the linesman quickly pointed him out to the Police who immediately arrested the chap.  Sympathy can therefore be the only reason why the referee did not issue a red card. Boreham Wood did get their just reward though in the 68th minute when from an Allinson freekick Ryan Moran headed home at the far post.  Queue another pitch invasion, all be it one of delight.  One so nearly became two a few minutes later when Noto’s shot was well tipped over. 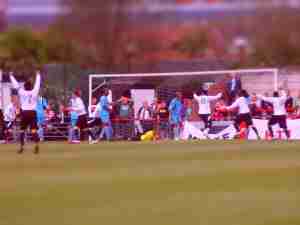 The home team began to take control of the game but were lucky to finish with eleven men as Seanla got involved with theKingstonian full back minutes after getting a yellow for verbally abusing the linesman.  Again we can only assume the referee felt it may cause further issues with the crowd.  With the clock ticking down Kingstonian threw everything forward, hoping to force extra time andDuku came close but for a fine save by Tucker. The game was wrapped up in the final minutes when Dewayne Clarke, who appeared to be going nowhere down the right flank cut inside and unleashed a shot and a half from twenty five yards into the top corner.  Of course we had another pitch invasion, this time led by one of the Boreham Wood substitutes and it took at least a minute of the ineffectual stewards to retain control of the pitch.  Four minutes of injury time were run down by the home team and the final whistle at last meant that Boreham Wood had reached the Blue Square South. 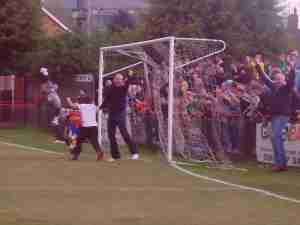 Next season will be a tricky season for Ian Allinson’s men.  The likes of Ebbsfleet United and Forest Green Rovers have applied to join the Blue Square South, and added to teams such as Dover Athletic,  Dartford and Havant it will be a strong league.  We are all for teams creating a passionate home following but if they allow such incidents as those from this game to continue they will win few friends at this level. More pictures from the day can be found here. About Meadow Park

Meadow Park is a nice non-league ground with a large park on one side and houses on the other.  It is a mix of the old with some of the darkest and dankest toilets known to man, and the new with a nice main stand.  and decent club house.  It is also the home to the Arsenal Ladies team (FA Women’s Premier League), and Watford Reserves (FA Premier Reserve League South). It has a capacity of 4,502. It consists of one seated stand with a capacity of 500, one covered terrace along the western side of the pitch and two un-covered terraces at either end of the pitch. How to get to Meadow Park 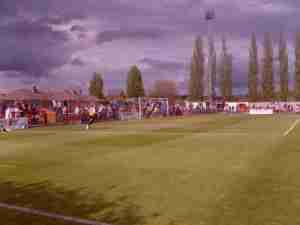 From M25 (Junction 23, South Mimms) Follow A1 south (London bound) Take first exit (marked Borehamwood A5135) Follow towards town centre (past BP Connect) Pass Shell garage and Police station on left Take 3rd exit (right) at Studio Roundabout into Brook Road, Take first right Broughinge Road, (just after Car Park) Follow round into Club Car Park (Barrier will raise when you drive up to it) . Nearest British Rail Station is Elstree & Borehamwood (3/4 Mile) walk through High Street. Local Buses: 107,292,398,602,606,656, B76, B77, B78 How to get a ticket for Meadow Park Pay on the door for all with plenty of room.  2009/10 prices were £9 for Adults and £4 for children and senior citizens.  I would imagine this will rise by £1 for 2010/11.
Share
Tweet
Share
Pins
Share
Like

All you Premier League pansies out there don’t know what you are missing. Whilst you are being told to sit in your plastic seat, drinking your club-branded fizzy pop and eating your bland...