Proof that Mourinho is right about FA match scheduling

Mourinho has cried ‘wolf’ again. Don’t we get tired of seeing him moan and complain and about the birds and weather? He seems like a man who puts a lot of effort in finding the right excuse and this has given his critics a vital hook. “No excuses” is a well-accepted truth in English football.

His most recent 1-0 victory in Russia against Rostov brought criticism of a ‘weak and ugly win’ - not characteristic to Manchester United’s identity as one of the best clubs in world football. Mourinho is at war with practically everyone but his players. So when Marcus Rojo took a banana and ate it during play time, people turned their focus on how this was Mourinho’s act of protest to his claims of a rigged fixture list. He went as far as to suggest that fatigue would be reason they will lose their next Premier League game. Oh, boy, did he make pundits' jobs easier.

“United’s reserves could’ve won that game tonight. We were looking at some of the cup draws they have had. They have had an easy ride in the cups, a lot of good draws, a lot of home draws.” Roy Keane later commented.

“If a manager goes out of his way to put excuses there, you are giving the players an excuse.” Glen Hoddle said.

Everyone seems to jump on the bandwagon of judging Mourinho prematurely.  But nobody makes the effort to dig deeper and see if he’s right. I might be the only person alive to have done so – no bragging intended, just a promise: the results will surprise you. 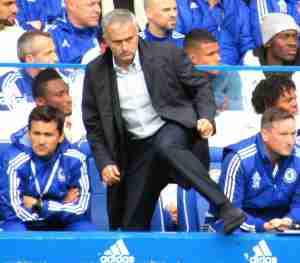 Picture: Brian Minkoff. Mourinho thinks he is being targeted unfairly.

Here are the findings:

Chelsea have undoubtedly enjoyed not playing in Europe this year. A look at calendar reveals they played seven cup games (FA Cup and EFL Cup). Since the start of the season, they had 195 days of rest in total – these are the days sandwiched between their matches in all competitions. They also played 15 late matches (after 17:30) and five early ones (12:30) in the Premier League.

If we are to consider that physical recovery of footballers takes at least four days, Chelsea had nine occasions in which they had to play their next game with three days or less to rest.

Let’s put this into a Manchester-Untied perspective. United have one more competition to play for this season – the Europa League. The Red Devils played 19 cup games this year – that’s 12 more than Chelsea. They had 168 days recovery time – that’s 27 days less than Chelsea. They played six late matches and seven early ones – one of the late matches was against Chelsea.

Taking into consideration the four-day recovery time of players, United had 22 occasions in which they had three days or less to rest – that is 11 more than Chelsea.

So what is the real issue here, you might ask?

“We have a lot of enemies, and we have to fight.” Mourinho commented after the Rostov game. The Portuguese seems to have walked into a typical ‘cried wolf situation’. He cried wolf in his first spell at Chelsea, at Inter and Real Madrid. Nobody seems to believe him anymore. If anything, he is becoming a laughing stock.

But he is right about one thing. The facts show that United have had less time to recuperate than Chelsea this season, and the result of this is easy to spot with glimpse at the Premier League table. But to dress all that in a conspiracy attire with no solid proof would be going a step too far.

If there is anything the FA organizers of match schedules can be blamed for, it is an apparent lack of support for its country’s representative clubs in European competitions.

Mourinho seems to be causing himself a headache by asking the wrong questions. So instead of “So which Swiss bank do you use?” how about “What are you going to do about supporting English clubs, FA?”

Things are heating at the top of the Premier League table. Manchester United's 3-1 away victory over Arsenal  increased the pressure on Manchester City who are still top wi...