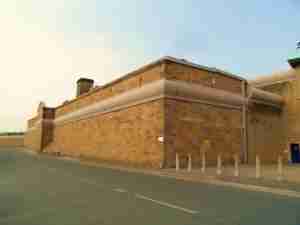 It is 12.30pm and we have been on the road for nearly four hours and covered over two hundred miles. We have just pulled up outside “Monster Mansion”, the imposing Victorian building that dominates the city of Wakefield. Inside these huge walls you will find over 600 of Britain’s most dangerous criminals, housed these days in single cells, with TV’s, kitchens and a range of recreational facilities on hand. Butlins has a hard job trying to keep up these days. Why were we in the birthplace of Jane McDonald, Gail Tilsey and Henry Moore you may be wondering? It certainly wasn’t for any penal reform protests, although it was criminal to think that on such a public holiday there was no football being played south of Woodall services. Whilst the south had the Royal Wedding, the north had the final round of matches in the Evostik League One (North). Ask any respecting Englishman where they would rather be today, on a Cameron decreed day of celebration and I bet they would say Clitheroe, Harrogate Railway Athletic or even the exotic delights of Prescott Cables. 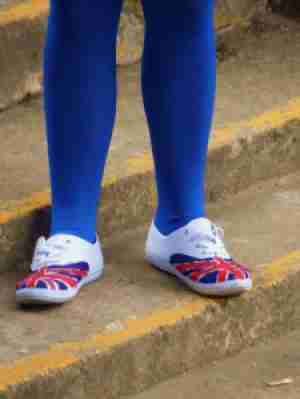 It took me all of 2 minutes to decide to forego my place on the sofa with the rest of the Fullers with a long trip up north when the opportunity arose over breakfast last Sunday. There I was in full rant about being forced to watch millions of flag waving foreigners thinking the Beckham’s were actually royalty when CMF said “Nobody is forcing you to watch it. Go and do whatever you like next Friday”. I do not need second invitations and with my .pink slip signed, I put a call to the Lewes Lunatic Fringe and it was three yesses from the Hove contingent for a Royal Wedding Avoidance Beano (RWAB for short). The only decision we needed to make was where we would be heading. Two options jumped out of the pages of the Non League Paper straight away. Garforth Town and Wakefield. The former would be hosting champions elect and undoubtably a few thousand travelling fans from Chester FC, whilst the latter would be saying goodbye to their modest little ground. As an added bonus for either, we would be heading straight off after the game to catch the bitter local derby in the Engage Super League between Castleford Tigers and Leeds Rhinos at the once known Jungle. So well appointed is the ground that it is known locally as Cas Vegas. Only way to decide where we would be heading. Bring out the dice! Three was the lucky number for Wakefield FC and that is why we sat outside the biggest A-Catagory prison in Western Europe. Well, that and the fact we were looking for College Grove, home of Wakefield FC. Our initial attempt of looking for floodlights had led us to Belle Vue, home to Wakefield Trinity Wildcats. Only of course this is the Super League area, so it isn’t known as Belle Vue anymore. Why didn’t we know it was now called the Rapid Solicitors Stadium? Bloody Super League. But we had left plenty of time to find the ground. And time is what Wakefield is famous for. We all know the story of John Harrison don’t we? The man who invented longitude and whose work is still the subject of legends. H6 is not just a road in Milton Keynes. H6 is/was his as yet undiscovered timepiece that is rumoured to exist somewhere and the sole reason why Boot Fairs still exist. That little baby is worth in excess of £10million today. The story was made famous in one of the last ever Only Fools and Horses where they find one of his other timepieces in their garage that they then sell at auction and thus become the millionaires they had always dreamed of (Fact for you. In the first ever episode of OFAH Rodney can be seen holding said timepiece and writing it in an inventory of their stock). John Sullivan, a true Comedy legend. 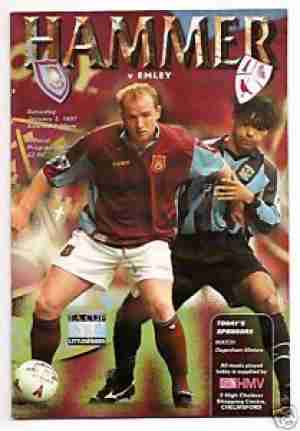 Anyway I digress. We were here for football and football is what you will get. Wakefield FC struggle to get attention from the local press, this being such a bloody Super League hotbed. The city has only had a football team since 2000. They were originally known and played in the local village of Emley, with its population of under 2,000. For such a small place it is surprising to see the success the club had. They climbed out of the county leagues and took their place in the Northern Premier League. They came to national prominence in 1998 when they managed to get to the 3rd round of the FA Cup after beating Morecambe and Lincoln City. A 2-1 defeat to West Ham United, then nowhere near as crap as they are today, earned the club plaudits as well as some decent cash which helped the club strengthen the squad. But Emley couldn’t go any higher in the league structure due to the inadequacies of their ground, and of course the ridiculous farce of ground grading. Faced with significant redevelopment costs just to maintain their position in the Northern Premier League they agreed to move down the road to Wakefield, taking up residence at, you’ve guessed it, the home of Wakefield Trinity Wildcats. See, it’s all about the bloody Super League. Two seasons later they renamed themselves Wakefield & Emley FC. In 2005 the club split after an argument about whether to show the bloody Super League in the club bar. Emley AFC headed back up the road to their old ground, whilst Wakefield FC moved across town into College Grove, the ground where we are trying to find now. We were not going to be alone at the football that is for sure. Interest in the RWAB had stirred the interest up and down the country’s football writers. They were coming from north, south, east and west to join in our mini-Royal protest. I felt a little bit like the Grand of Duke of York, leading his ten thousand men up and down the hills. For you history buffs out there you may be interested to know that the “Grand of Duke of York” was actually Richard the Lionheart aka Richard Plantagaenet who was killed in the Battle of Wakefield in 1460. The cast of characters included:- Eventually we found the ground. But it was closed. Apparently they do not get many fans turning up 2 hours before kick off up here. So we hot footed it back into town and headed into Henry Boons for some excellent Clarke’s IPA, brewed no more than 100 yards away. Gib and Chris eventually found us and the celebrations began. Come on! 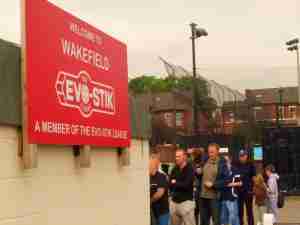 Two thirty arrived and we headed up to College Grove to be met with a queue. A queue? At a Evostik game? Word must have travelled that this was the last game to be played here so the hoppers were out in force. Now, just before we proceed, let’s get something very straight. We are not hoppers. We do not keep our programmes (if we buy one) in plastic wallets, nor do we clammer for a teamsheet. Yes we like a beer, and if there is a local brew we may indulge. But we don’t take notes on said ales, comparing Burping Bottom at Worthing to Sneaky Sandbox at Retford. We don’t have a particular desire to touch the ball, or take photos of floodlights or dugouts. Hmm, getting into dangerously familiar territory now, so let’s just leave it as WE ARE NOT HOPPERS. You would think that a bumper crowd would make the secretary on the turnstile happy, no? Not at all. “Best takings ever?” Danny quipped as he handed over £7.50. “Where the bloody hell have they been all season is what I want to know!” came the retort. “Programmes?” I asked (plastic wallet at the ready). “All bloody gone. Didn’t even save one for me”. He wasn’t a happy chappy so we let him be. 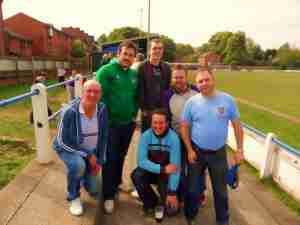 Question: What is the difference between John Smiths Draft, and John Smiths in a can? About 70p in th Wakefield bar as Deaks and Dave found out. Dave is cynical at the best of times, but when he knows he has been cheated on beer he goes into overdrive and started drafting his memo to the Trading Standards for such blatant price discrimination. We were joined by a few more familiar names and faces. David Hartrick, aka “Hartch”, had made the long journey down from, er, Huddersfield. Sporting a very nice New York Cosmos top if you please. Such retro culture has no place in the Evostik Division One North young man! Callum J Smith (Just in case you know another Callum Smith who wasn’t here today) on a whirlwind of a trip that would include Pickering Town and Aberdeen no less. And Graham Kenworthy who just wanted to escape his wife’s cooking. Wakefield 0 Curzon Ashton 1 – College Grove – Friday 29th April 2011 Some may say that this was a “dead rubber”, a game with little meaning. In Italy they even have a word for such games – Biscotto. The visitors had already secured their play off place some weeks ago, but could gain home advantage and thus avoid either Chester or Skelmersdale (who had turned the game into a two horse race months ago) with a win. Wakefield could in theory finish as high as 13th or as low as 18th. Such excitement! And did it deliver? Er no.

I can only remember two incidents from the game. Curzon scoring midway through the first half (and I nearly missed that) and then Curzon being denied a clear free kick (and a subsequent red card for the Wakefield defender) when the referee, some 40 yards behind play chose to ignore the linesman who flagged for the incident. 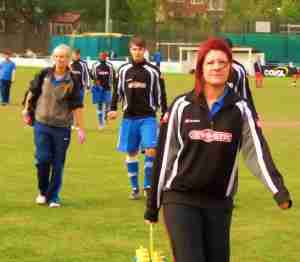 The game was spent in a blur of conversation, of quick wit, gags and piss-takes. Eyebrows were raised by the presence of the “Best looking physio in non league football” according to someone on Twitter who will remain nameless. I had a wander around to the dugouts to take some pictures and overheard her tell a substitute that unless one of the players could lend her the use of their shower, she would have to go all the way home to get ready for the “Big Do” that evening. Form an orderly queue boys. News of congestion, fighting Chester fans and no burgers from the Garforth game gave us a smug smile that we had chosen the right venue. Whilst there was only just over 200 in College Grove, it did underline though the dominance of Rugby League in these parts. A similar level game played at Belle Vue between the Wakefield Trinity Wildcats and Salford City Reds would attract a crowd of over twenty times this. For the final part of the game we headed round to the “Kop”, the stand constructed behind part of the goal for no particular reason. Three steps of terracing with a scaffolding frame and covered in polythene. Good for growing tomatoes, bad for watching football. So as the final whistle blew and the goodbyes were said, we headed off to part two of our day over at Castleford. For more of fun head on over to EFW. 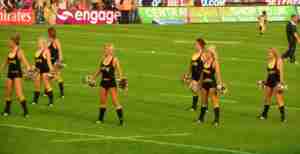 The fun carried into the evening with games in the car like “Guess which team I am thinking about now” (with no other clues) and “Name ten actors and actresses who were in Dallas”. We boys just know how to have fun. More photos from Wakefield can be found here, and from Castleford here.
Share
Tweet
Share
Pins
Share
Like

About The Courage StadiumEveryone knows the ground as Hayes Lane, despite it carrying the name of the brewers and it has been home to the club since 1938 when they moved from just down th...