Former Juventus defender Leonardo Bonucci shocked many when he decided to move to rivals AC Milan this summer. The veteran centre-back's move to the Rossoneri even raised speculation that he had fallen out with his Juventus teammates.

However, the 30-year-old Italian was also heavily linked with Chelsea this summer. The Blues boss Antonio Conte has grown to become Bonucci's admirer since their time together at Juventus and in the Italian national side.

The pair reportedly talked about a possible move to London over dinner in Turin with reports in Italy claiming that Bonucci agreed to reunite with Conte at Stamford Bridge. However, the Premier League side opted to go for Antonio Rudiger from AS Roma instead, leaving Bonucci free to join AC Milan and many to think that there is a rift between Conte and the Chelsea board regarding transfers. 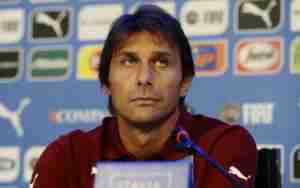 Picture: Nazionale Calcio. Conte is not happy with Chelsea's dealings in the transfer market this summer.

Unfortunately, AC Milan have not shown their best form this season so far despite spending almost £175 million in the summer transfer. Vincenzo Montella’s men are eleventh in the Serie A standings, having collected 13 points out of nine games.

Bonucci himself has not been in his best form since his move to San Siro. Even, Goal’s Solace Chukwu stated that neither the player nor his current club has benefited from the deal as the defender is now set to miss the reunion with his former employer at the Juventus Arena on Saturday after being sent off in last week’s clash against Genoa.

Despite the fact that things are not running smoothly at San Siro, there is a very small chance that Bonucci will leave Milan within six months of joining them. Chelsea's  £34 million signing Rudiger's form since his debut at Stamford Bridge is also not going to help this prospect.

However, a deal could still be on the table next summer rather than in January, should Conte choose to commit his future to the London club and should Bonucci's form continue to take a dip.