How Mourinho’s ‘outsider mentality’ has shaped his tactics

The outsiders: those on sidelines that stand against all odds or sink to a life of misery. We see them everywhere: on the street, sometimes drunk and resting against a wall, and sometimes quiet and invisible to the everyday eye, and sometimes even on their multi-million yachts in Monaco. The versions are countless.

There is an Indonesian movie called The Raid in which the antagonist is a short man who’s fought against the odds his whole life and, as a result, has built a backbone and a liking for getting himself into the ‘underdog position’. Supremely confident in his fighting skills, he fought two against one or bare-handed against a knife-wielder, or would pick on a heavier opponent.

In the competitive game of football they are like ink in water. They are the Suttons of the FA Cup and the Liverpools at 3-0 against Milan. They are sometimes the underachievers, or underdogs who can become the heroes. But sometimes they are the habitual winners who fight when they fail to win. Jose Mourinho is inked from top to bottom either way.

Ever since his arrival from Porto to Chelsea, he made sure everybody knew it: ‘I’m a Special one’ he mustered with his broken English, perhaps meaning he had won the Champions League before; that he was not a ‘Jose who?’

At Chelsea, he was criticised for constructing a side too boring and defensive and at Madrid – for turning 30+ million creative players into ordinary defenders. United are next in line. They have the second-best defensive record this season, behind Chelsea and Tottenham. They also offensively trail to the leaders by 20 goals. Who could’ve known… 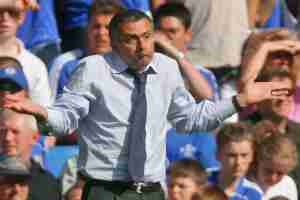 It is hard to separate Mourinho’s defensive approach from his overall attitude – one of being outside the favoured circles in football, one who has to be on guard at all times. His understanding of the football world around him often creeps into his tactics. Defensive duties are prioritized over offensive. Tracking back, playing like a unit, low tolerance for mistakes and using a clinical striker who can take care of the few chances presented in a match – that’s Mourinho’s style, and he’s won many trophies with it.

You would think being part of a few who had achieved similar success, Mourinho would mellow down. On the contrary, he has never shied away from pointing out the referee’s tiniest mistakes to match schedules and football ruling bodies’ policies. His belief in ‘us against them’ is as strong as ever and this can be quite the glue for his players, paradoxically.

Saying Mourinho’s never lacked a talent for stirring things up won’t miss the mark by a mile. When still at Real Madrid, he blamed Barcelona for scooping on Andres Villas’s power at UEFA, the current vice-president, after their first leg clash with Real Madrid in 2011 – a controversial statement to say the least. Most recently he blamed the FA or setting up the Premier League’s match schedule in such a way as to favour particular clubs. He’s played the role of the frustrated manager for quite a long time.

Mourinho is different, remember?  As a football player, he was semi-serious to say the least.

He owes his managerial career to Sir Bobby Robson who saw talent in him from the time when the Portuguese was his interpreter at Barcelona. We can almost see him, sitting there, watching the pitch, half-heartedly blurting out translations, only to go back home and scrabble a few notes about the game to show to Robson the day after.

Then there is the football lecture that shaped the world of football today to Barcelona’s standards: that of proactive, possession-type football which has passed the hands of Rinus Michels, Johan Cruyff and Pep Guardiola. Mourinho was present at that too, the rebel. Only while everyone was taking notes, he must have had a few chuckles in his mind – or out loud, I won’t be surprised. 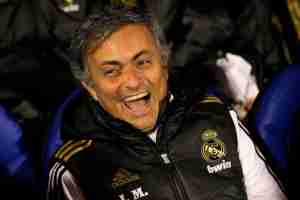 His football seems the anti-thesis of this philosophy, which has dominated football in the last decade. For him too much possession probably means a risk of making a mistake, an unnecessary burden which increases the chances of losing the ball and a psychological weakness which stems from the fear of adhering to Playstation perfectionism.

For Mourinho, winning is a few numbers on scoreboard at the end of the game. Those digital stats the media put up later in their analysis are just for show. A few Barcelona fans would disagree. Guardiola would probably throw up.

His attitude is focused on the unembellished basics of the game. There is no artistry about it. Artistry comes out of love for experimenting with aesthetics. For Mourinho, this probably seems like a luxury gained from a privileged and easy life. And we know all too well he thinks his football life has never been easy. There is always an air of survival about him. You can see it in the changing colour of his hair over the last few years and you can see it in the passion his players show on the pitch – apart from his second spell at Chelsea.

Luckily for him, that football is an uphill struggle is about right. Footballers have to devote their lives to the sport if they are to receive a chance of making it as a pro. Those who come from underprivileged backgrounds are surprisingly the ones who most often make it than not: Ribery, Ibrahimovic, etc. And those are Mourinho’s kind of players. They seem to go well together.

Cutting to the bone of it, Mourinho’s backbone in football is his desire to win despite the odds. The odds that often make him moan and complain and get him singled out also feed his fire to win. That’s Mourinho, the master of the minimal win, the outsider – the box he seems to fit in best.

The FA Vase game between Erith & Belvedere and Frimley Green was never on my agenda for this afternoon.  After all, I had had my fill for the weekend with Lewes v Harrow Borough yeste...