Arsenal are through to the FA Cup quarter-finals following a comfortable 2-0 win over non-league club Sutton United yesterday. The result hardly nullified the embarrassing defeat at the Allianz Arena as the same symptoms resurfaced, only against a more forgiving team.

Sutton played spiritedly, applying pressure high up front, putting men behind the ball and defending well. They were a whisker from a goal on several occasions too as former Gunner Roarie Deacon drew applause for half the chances. In the end, the result was predictable, but the five-tier difference between the two teams made some conclusions even more glaring.

For Arsenal, going down the tiers must have felt like a strangely invigorating, badly planned holiday. Arriving in Sutton to see a cone with a sellotape-glued note with the handwritten ‘Arsenal bus parking space’; entering the dressing room to find everything all too ordinary, with barely any space to put the kit on and a shitty-brown wall-paint mocking the corporate world they have grown accustomed to. Even Wenger admitted the value of this place, unspoiled by briefcases of cash.

“The changing rooms for me were fantastic – the closer you are [literally], the more untied you are when you go out there.” He said.

Perhaps, it was their pill for their lack of unity of lately. Perhaps the obsession to perform and to adhere to strict diets have stripped the Emirates dressing rooms of that camaraderie you often find in the lowest tiers where the pressure of money has still not intertwined with the enjoyment of stepping onto the ‘grass’, where beer tastes sweeter before, during and after a match and the banter is humbling in its brutal sincerity. 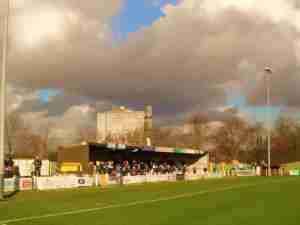 But there was a lesson waiting on the pitch too. What we saw was a team of 11 non-league players playing the game of their lives: mustering all the energy from the pre-match burgers and crisps to put the pressure on Arsenal. And, for 90 minutes, it worked more often than not.

Sutton were in great shape despite the extra calories. No doubt, they keep fit in their own way, but it was their passion on the pitch stole the show. The underdogs, united, charged, with nothing to lose, played with freedom and flow against a technically better team. And that, in itself, might have been a scream in the face for Arsenal players.

Had Arsenal played in a similar way against Bayern Munich, the result would surely been different. On the contrary, a pinch of underestimation showed in Sanchez, Oxlade-Chamberlain and Walcott’s attempts to play alone rather that involve teammates.

Nonetheless, leaving the corporate Emirates and immersing into the real world of grass-root football might have struck a few romantic souls. The routine 2-0 victory for the professional team was unable to conceal the spirited and curious efforts of the ‘lesser’ team to explore the unexplored. And that is an example worth taking in.

If Walcott had felt awkward for not preparing a pennant to give to Sutton captain Jamie Collins at the start of the match, then surely he must have felt a bite of inspiration at the end, spurring him to enter Sutton’s dressing room and mix in with the players. The Arsenal fan base would hope the experience has struck a similar chord with the rest of squad too.

Lewes’s relegation was confirmed after the 2-1 home defeat to Bishop Stortford on Monday.  Nobody at the club ranted and raved about poor decisions, bad luck or conspiracies.  Dignity was...