Football Tactics Board: The 3-5-2 formation explained

The 3-5-2 formation was born in the 1980s as an attacking variation to the 5-3-2, and soon emerged as an effective solution against the two-striker problem. In this article, we analyze the pros and cons of the formation and look at several instances where it has been practiced by football managers.

Argentina under Carlos Bilardo implemented the 3-5-2 formation for the first time in international matches. That was way back in 1986 in a team that had Maradona and Valdano as the two strikers. Former Brazil manager, Sebastiao Lazaroni used this during the 1990 World Cup. Six years later, England under Terry Venables used this during their Euro campaign.

Much has changed since. With more and more teams opting for a single striker model, the 3-5-2 has fallen in popularity. Apart from a few teams in the Italian Serie A, the system has become mostly outdated.

What's the idea behind it?

With two strikers and a five-man midfield, it is evident that the focus remains solely on maintaining possession and scoring goals. The wing backs have a flexible job - they do not enjoy much defensive responsibility per se, but are expected to drop down and help the three-man defense, should the need arise. Thus, the formation can very well change to 5-3-2 while defending from the original 3-5-2.

This is tremendously effective against a 4-4-2 where the defence has an extra man to clear the danger, and the midfield heavily outnumbers that of the opposition, leaving no space for an attack to build up.

The system deploys two strikers with ample support from the wide midfielders. The 3-5-2 being an attack-friendly formation, ensures there won't be any deficit of chances, but the strikers need to have adequate finishing skills to convert them into results. At least one of the strikers must be good at heading, for there should be enough crosses from the wings during attacks.

The midfield is heavily loaded with three central midfielders and two wide ones. Some mangers prefer two of the three central midfielders to be defensive-minded and the middle one to act as a central attacking midfielder. The wide players are expected to have a lot of pace, dribbling abilities and enough stamina to last 90 minutes. The last attribute is especially important since they have to shoulder the dual responsibilities of wingers as well as full-backs.

The three center backs must possess the qualities of both traditional center backs as well as full-backs since the left and right center backs are often needed to race out to the flanks to clear attacks, especially against overlapping fullbacks. Understandably, such specialized defenders are tough to find these days.

The 3-5-2 can be as much a headache as it can be a boon. While it focuses on outnumbering the opposition in the midfield and leading attacks while enjoying possession, it can quickly push a team into the back foot when the ball is at the opposition's feet. It leaves the wider areas in defence open with no back-up whatsoever for the wide midfielders. 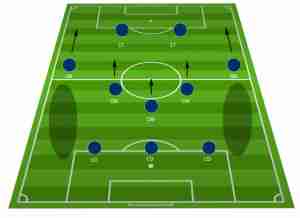 Most teams in modern football employ a single forward. This leaves the team playing 3-5-2 with three defenders against one center forward. Essentially, this means two of them are wasted in their positions, while the opposition can gain from having an extra man in the midfield.

Moreover, the system becomes especially difficult when the opposition team uses a false No. 9. If one of the defenders tracks him up the field, he will be dragged out of position, but if he doesn't, the back three is left with no men to mark, thus becoming vulnerable to sudden attacks. 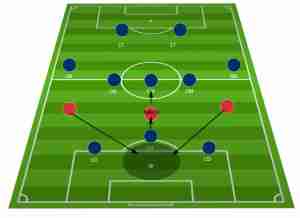 Cesc Fabregas coming in from deep to score against Italy in Euro 2012 is a fine example in this case.

The 3-5-2 is clearly a difficult system to implement successfully if one doesn't have the resources, as Manchester United fans began to realize during the first couple of matches in the 2014-15 season. Louis van Gaal had exercised the formation almost as a last resort at the World Cup during his tenure as the Netherlands coach, and it worked for him because he had the players. At Manchester United, he earned a loss and a tame 1-1 draw against Sunderland in the early part of the season.

Among managers with a penchant for high possession stats and relentless pressing, only a few like Pep Guardiola and Marcelo Biesla have reaped immense dividends from the 3-5-2. Antonio Conte used it effectively at Juventus, while others like Paul Lambert at Aston Villa suffered the repercussions of a badly managed system.

A variation of the 3-5-2 is the 5-3-2 where the wide players fall back and man the field as full-backs. Some managers prefer the 'W' formation which finds the central midfielder slightly up the pitch in a more attacking position and his mates on either side acting as defensive midfielders.

Every now and then someone performs a piece of skill in football that defies limitations imposed by the body, tactics and team responsibilities. In modern football, individual flashiness ...