Wenger’s values for Arsenal are unfit for competitive football

Wenger is a unique case in football. His story is one of ‘rise and fall’, which when you think about it, is a story we tend to meet much more often in real life than the Hollywood’s version of ‘rise, fall and get redemption.’

The thing is, Wenger seems to be neglecting football's most important point: that it is a warlike game. It’s an imitation of war. Eleven against eleven, two ‘armies’ facing each other with sole purpose of defeating one another. That’s the underlining point of it. Mourinho’s got it right: he only cares about the result, not the manner in which it is achieved. For Wenger, “it is about winning, but it’s as well about values.” Or should it be value$?

In his latest interview he said: “For me Arsenal is the best club in the world and what we have built is absolutely remarkable, not only on the results front but on the values that this club, what we built.”

So it’s about the values of the club. What exactly are they? Here is an observation of what I think they might be:

If this is the case, fair enough. Arsenal is well-run business. Finances are well in order and the expansion is going according to plan. But with every passing year the club looks more and more like a huge mall rather than a football club, which it is.

There seems to be a severed link between the fans and the management of the club – a severed link between the times when Arsenal was a close-nit gathering place for those with a similar passion and the new times of entertainment worth spending your well-earned money for. The latter are the values which emanate from Arsenal, at least in my opinion.

Remember that Dennis Bergkamp was brought in before Wenger. The club’s backbone of the famous ‘Back Four’ was already in place before him. Even Sol Campbell, Ashley Cole and Jens Lehmann were players who would find it hard to stick around at modern Arsenal for too long. So why do we wonder why Arsenal is criticised for a lack of leaders when the club’s path seems to be one of depersonalization? 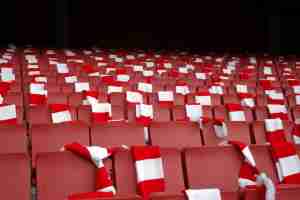 Wenger continues: “Nobody talks about [values] anymore but the sport is as well about values and I think integrity, respect, humility, togetherness are very important qualities and if you would visit our club you would see that they really exist on a daily basis.”

Now we are talking. But let’s all imagine we are Wenger. You lose a game, the fans rebel and start to call for your head.  You come out and say: “At least we showed humility and integrity in defeat.” Good, really good, but if it was in real life which football isn’t. The whole point of the game is to win. Even Leicester know that.

Even worse, let’s imagine you lose a game and with your squad showing no togetherness at all, as in the case with Arsenal against West Brom. You come out and say that? It just stinks.

What makes an impression here in those difficult for Wenger times is that he doesn’t come out with the things he can really brag about, but with this abstract ‘crap’ that we all can see is like a straw for a drowning man.

Why didn’t he come out and say: ‘This is Arsenal. We have expanded and achieved great financial stability in times of great financial instability with the appearance of Arabian and Russian billionaires.’ Is that not worthy of a few claps? No, he doesn’t say this, and it is the only thing he can really brag about based on the last 10 years.

Instead Wenger comes out with statements such as this. Don’t get me wrong, the man deserves respect because he has been a pillar for all the things he’s talking about. But in the game of football, this doesn’t work – it is as simple as that.

You need the urge to win, the big egos like Vieira, Adams, Keane, even Costa at Chelsea. You need the team to unite behind their hunger for winning. Players like Bergkamp, Henry, Adams and Lehmann were among the hungriest winners of Wenger’s teams. That is what's missing at Arsenal.

‘Sing us a different song, Wenger.’ Instead, Wenger trots on like a broken record.

It is true, Wenger has given Arsenal a different identity, but unfortunately it seems outdated – a paradox because he tries really hard to present it as the modern version of Arsenal.

It just doesn’t work anymore. It doesn't work in competitive football. Time to tend to your garden, Wenger.

Former Gunner Lukas Podolski was involved in a curious incident during the J1 League clash between Vissel Kobe and Kashima Antlers on Wednesday. The video P...