Arsene Wenger has ruled out selling Alexis Sanchez and Mesut Ozil in January, according to the Daily Mail.

The French manager, who has built a reputation for being notoriously stingy during his 20-year rule, insists that despite the risk of losing his star-men for free next summer, he would rather run down their contracts than let them go in the midst of the battle for a Top Four position.

Wenger, however, has not completely ruled out accepting huge bids coming in January.

Alexis Sanchez and Mesut Ozil have so far refused to sing new contracts despite reports that the club have offered them in excess of £280,000 a week.

“I rule it out.” Wenger said. “I do not think every day about that but as long as they are here they have to give their best for the team and the club.

“In my head, they sat until the end of the season. That is the decision taken at the start of the season unless something unbelievable happens.

“You always confront me with many speculations and state of the transfers but, for me, they stay until the end of the season.

“Will they stay longer? That is impossible to answer today.” 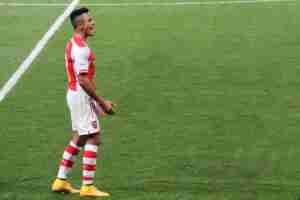 Picture: Sanchez has reportedly said 'no' to Gunner offer of 300k-a-week. Ronnie Macdonald, cc by 2.0

This is not the first time Wenger has ruled out selling key players before a transfer window and then the players ending up being sold in the end as the cases of Robin van Persie, Samir Nasri and Cesc Fabregas testify.

But Wenger is well aware of the difficulty involved in finding quality replacements in the short span of the winter transfer window. And should the Gunners qualify for Champions League football next season, they will have plenty of time and resources to do so in the summer.

Arsenal are currently fourth in the Premier League table after 13 games. They host Huddersfield tomorrow at 9:45 pm.

Jurgen Klopp has urged the Liverpool faithful to show all their support for the club when the Reds return to Anfield to play Crystal Palace on Sunday. Liverpool’s last game at home...