Arsene Wenger has revealed his plans to give Alex Oxlade-Chamberlain a role in central midfield in the near the future after his spectacular display against Southampton in the fourth round of the FA Cup.

The 23-year-old winger has impressed with the precision of his passing and ability to control the game from the centre on previous occasions but according to Wenger, he didn’t posses the needed experience to play there.

“I think he is a good wide player and a good central player” Wenger told journalists today. “In the future, I would say [he would play] more centrally. When you are young, you are pushed wider because central is [where] more experienced [players play]. Naturally, I think he is comfortable to be always involved.”

Wenger’s bird's eye view from the stands in the Southampton game due to his four-match suspension after a sideline altercation with the fourth official during Arsenal’s 2-1 in over Burnley might have convinced him to commit to changing Oxlade-Chamberlain’s position. 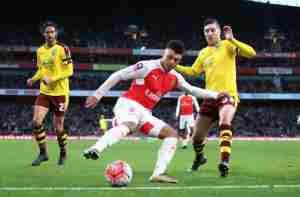 The player, who joined from Southampton in 2011, has spent most of his career at the Emirates playing on the wings, with a few stand-out performances from the centre of the pitch against Milan in the Champions League and Crystal Palace in the Premier League.

He told BT Sport earlier: “Arsene Wenger wants to see artist. Arsenal need someone to pick up out a pass and bring variation to the game. He [Chamberlain] played there as a kid, and Wenger was forced to pick him there tonight [against Southampton], but I think that’s his natural position.

“He has pace in there as well. He was always looking for the ball. All of his passes were good and nicely weighted.”

With team star Santi Cazorla out with a long-term injury, Oxlade-Chamberlain might get chance to play there soon.

Second-placed Arsenal host Watford on Tuesday in a bid to keep the pressure on Chelsea who are topping the table with an eight-point lead.

Chelsea defender Victor Moses has extended his stay at Chelsea with two years, the club reveals. The new deal will keep him at the club until 2021. Moses has become a regular under Anton...