Wenger: Holding will have a great future

Arsene Wenger has revealed that he believes Rob Holding has a great future ahead of him because of his awareness of the game and mature attitude off the pitch.

Holding, who was brought in from Bolton Wanderers in the summer, has put in excellent performances on the right side of Wenger’s new three-man defensive structure, and according to the French manager it is all down to the youngster's mental abilities and attitude.

“When we were in the situation where we decide to play him, you must have confidence in him,” Wenger said. “I believe he has a great future because he’s very intelligent and has a very objective analysis of his own performance.

“The biggest part in the improvement of a player is to be capable of analysing his performance in a very objective way, [be] a little bit harsh, and I think he has that in him.

Holding’s recent performances for Arsenal have given birth to claims that he might be the future of England’s defence, and although judgements are premature, Holding's statistics in comparison to Manchester City's John Stones tell a similar story.

Arsenal face their biggest test in the closing stages of this season on Sunday when they travel to White Hart Lane to play fierce rivals Tottenham Hotspurs . Should Wenger opt to continue with his current formation, Holding is sure to keep the dream rolling. 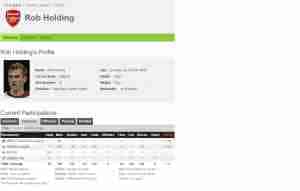 Picture: Whoscored.com. Holding has had a great debut season for Arsenal.

Keane criticises Mourinho for paying too much attention to critics

Roy Keane has advised Man Utd boss Jose Mourinho to pay more attention to his job and less to his critics. Mourinho has found himself on the receiving end of criticism ove...