Shkodran Mustafi and Rob Holding will undergo last medical checks before Arsene Wenger makes a decision on them for Saturday’s clash against Tottenham Hotspur at the Emirates.

Mustafi sustained a muscle tear during Germany’s 5-1 victory over Azerbaijan in early October, while Holding strained his thigh against Red Star Belgrade on November 2.

“Mustafi will have a final check tomorrow.” Wenger said in his pre-match conference. “Welbeck as well. So we will make decisions on all of them tomorrow.”

Oliver Giroud, however, will certainly miss the derby after suffering a knock in training while on duty with the France national squad last Tuesday.

“Giroud picked up an injury, I don’t think he will be available. It’s short term, we have to assess him on Monday.”

Laurent Koscielny is set to return after missing France’s game against Germany on Tuesday.

“It was needed for him [not to play]. You know we couldn’t use him for a number of games.

“He just came back against City because he had an Achilles tendon problem. For me, if he had played in Germany, certainly he would not have been available for Saturday.”

Meanwhile, Wenger has admitted that Santi Cazorla’s injury is among the worst he had faced during his 33 years as a football manager.

He said: “It is the worst injury I have known, starting with a little pain on the Achilles and it’s gone from worse to worse.

“And I must say I know how much Santi Cazorla loves to play football and loves to be out there every day and I feel really sorry for what happened to him because it’s unbelievable." 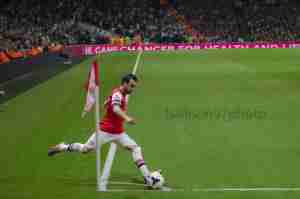 Picture: hallison97photo. Cazorla has been out of the game for a full year.

“Last time I’ve seen him was one month ago. He came here and I told him to prepare as well as he can. There are competent medical people around him and [he] tries to practice.

“I have not spoken to him recently, but I hope he comes back and [be] ready to… that’s why I left him out of the squad, you know, hoping that he will be available in January.

“That was my target at the start.”

Asked whether he had any doubts whether Cazorla would play again, Wenger said:

“Let’s not talk about that, but I hope that you are wrong.”

Arsenal host Spurs on Saturday at 12:30 pm. You can find a full list of TV channels and streams that will show the game here.