Share
Tweet
Share
Pins
Share
Like
Whitstable, home of England’s biggest village green (despite the fact it is a town), Alan Davies and TV’s worst comedian, Harry Hill.  Twinned with Mölndal in Sweden and “just good friends” with Sisimuit in Greenland.  And the final venue for my 2012/13 football season.  Yes, you may say it is nearer to the start of next season than the end of the last, but I play by the official rules.  UEFA told me over a coffee a few weeks ago (not all of UEFA but someone who works there) that the season ends on the 30th June each year, and so despite not seeing a game for over 4 weeks, today I bow out of the 2012/13 season having seen a grand total of 93 games.  Not quite the high of 2011/12’s 105 games, but even still – pretty bloody impressive if you ask me (which of course you are). 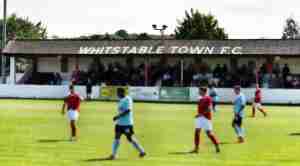 We all dream of fixtures falling into place for the Best.Day.Everand here we are at the end/start of the season with a double-header of Ryman League South v Football League teams, separated by just a few miles, or one stop on the train.  Alas the lack of match action in the past few weeks has driven us to the extreme.  I wasn’t the only one who had seriously looked at the World Stool Ball this weekend before I stumbled across Dagenham and Redbridge’s visit to the Kent seaside.  As 80/1 outsiders for the nPower League Two title next/this season with the online betting companies, Dagenham & Redbridge will hope for a season similar to the start of next season rather than the end where they were in freefall. Add into the mix Gillingham’s first run out of the season at Faversham Town and it was a day better than hospitality at the FA Cup Final, or a free ticket for the All-German Champions League Final.  Probably. It is only time before such Pre-Season friendlies are a thing of the past.  Ten years ago Premier League clubs used to be happy to play a few games against local teams, headlining their Pre-Season campaign with a home friendly against a team from more exotic shores.  Today, clubs at the top-level think nothing of travelling thousands of miles to  play a rival.  Chelsea v Manchester City in New York, Manchester City v Arsenal in Helsinki, Liverpool v Everton in Timbuktu (yet to be announced I am assured).  No venue is out of question if the cash is right.  Even the Championship teams are getting in on the act – Watford in Italy, Brighton in Madrid and this week Bournemouth heading off to play FC Zürich.  I am sure in the next few years Gillingham and Dagenham will be off to Moldova or Uzbekistan rather than the Kent seaside. Whilst the Daggers and the Gills have a their fixtures in their Outlook diaries already, us Non League fans still have a few weeks to wait. It still amazes me how long it takes these Non Leagues to publish the fixtures. But those who are in the game will not be surprised at all by their dithering.  Whether the Ryman League season will start on time is still up in the air.  Thurrock’s appeal against their harsh relegation is still to be heard – I mean it is only two months now since the season ended. 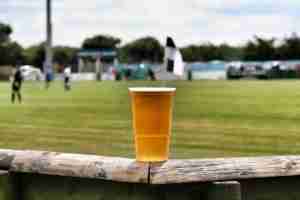 So first up was to be a visit to the home of Shepherd Neame, Faversham.  Favers, to its good mates, was once the summer residence of choice for English royalty.  It once used to be on the coast, and with Ryanair still to launch its route from Ye Olde London Town to Magalufe, their only option was to holiday on the Kentish coast.  And what do all English tourists want?  Football and Beer.  So the King at the time suggested that a brewery and a stadium be built, despite the fact football was 600 years away from being invented. Today, the two are combined into one lovely bundle.  The Shepherd Neame Stadium is where all the action takes place these days.  The Lilywhites had a fantastic season last time out, finishing in third place behind the giants of Maidstone United and Dulwich Hamlet.   Progress is the key word in Favers, and with the Stones and Hamlet now out of the picture, Faversham will fancy their chances to go one better this season. Faversham Town 2 Gillingham 4 – Shepherd Neame Stadium – Saturday 29th June 2013 A bumper crowd were queuing around the block to get into the stadium when I arrived at 12.45pm.  Had we all missed football that much?  The sun was shining, the grass was green and Faversham had pulled all the stops out to accommodate a bumper crowd.  I’d just had time to take my first sip of the season when Faversham took the lead with a free-kick from 25 yards that rippled the top corner.  Yep, rippled.  It was that good that I should have also added it then nestled in the corner.  Rippling and nestling.  Like it had never been away. 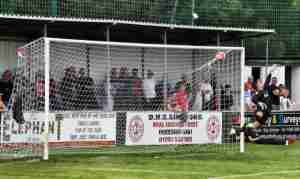 This was never going to be a dull goal-shy draw.  Gillingham equalised through Millbank before Deck’s superb strike from distance gave them a half-time lead.  It was no surprise that the Gills replaced the whole side at half-time, with the always dangerous Adam Burchill wasting no time in the second half to open his account for the season, heading home unmarked in the penalty area after just two minutes.  Faversham came straight back at them, reducing the arrears when a goal keeper howler presented them with the simplest of goals, but Burchill restored the lead with a bullet of a shot from 25 yards. It wasn’t just us who had missed football.  Here we were in the back-waters of step 4 of the non-league pyramid and Sky Sports were reporting from the game.  Sky Sports who would normally be sniffing around Stamford Bridge, The Emirates or Old Trafford on a Saturday afternoon, also had nothing to do and so they had come down to Salter Lane for their football fix. It was only right that I finished the second half with a bottle of Whitstable Bay, “an Organic Ale which has an elegant, light flavour and is backed by the traditionally farmed, English malted barley and organic hops from New Zealand, which fuse to produce a bittersweet flavour with floral overtones and a dry finish.” Free plug over (send beer to TBIR Towers, PO BOX 164, London). With ten minutes to go I headed for the exit.  I literally bumped into Martin “Mad Dog” Allen as I departed.  He asked me if I was heading to Ashford Town, like him. “Nope – Whitstable Town” I replied. “Don’t you just love pre-season?” he replied, adding a “Be lucky” before he went on his way. Whitstable’s Belmont Ground is one of the finest in the Non Leagues.  It has a bit of everything – a big wooden stand, a covered terrace, a hedge and a playground for the younger fans, like Kenny Legg. The Oystermen have been bouncing around the Isthmian League South for the past six years, not really troubling the top or bottom of the table.  But this season it could all be so different, with the ex-Gillingham stars Nicky Southall and Jason Lillis have taken charge. Unfortunately, the difference between the final whistle at Favers and kick off seven miles down the road in Whitstable didn’t give me a chance to enjoy the fine hospitality of Kent’s hottest town.  Some years ago a few poshies came to Whitstable, opened up a cake shop and ever since the big nobs have been flocking to the seaside town, lured by the fine oysters, the fine climate and the fine football on show at the Belmont.  A two-bedroom house within a tennis-serve of the beach costs a cool £675k in Whitstable…£675k! Meaning that your average Premier League player would have to save for four whole weeks before he could buy one! The lack of time didn’t only mean I missed out on a couple of fine brews from the Whitstable Brewery but also on visiting one of England’s narrowest public right of way’s.  A trip down Squeeze Gut Alley is a favourite Saturday afternoon activity in these parts, seeing if you can actually pass down the alley without requiring the fire brigade to have to cut you out. High jinx indeed.  But we had a game to get to so the fun would have to wait for another day. Whitstable Town 0 Dagenham & Redbridge 4 – The Belmont Ground – Saturday 29th June 2013 Was this a classic?  Not at all.  But it was a good run out for all involved for the season ahead.  Dagenham Dan, Brian and Liam…pre-season starts here boys so get ready for the ride.  The Daggers hardly broke a sweat, scoring four without really being troubled as a decent crowd of a few hundred enjoyed a rare sunny day in this season we call “Summer”.    For Whitstable it would have been a good run out, but more importantly, a very good pay-day for the club.  The window of opportunity for games like this is very small for non league sides, so thumbs up to the Oystermen for pulling off the event so well. 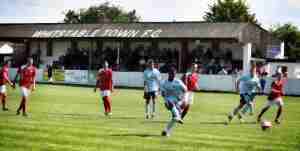 Dagenham opened the scoring when Dennis cut in from the left and fired home half way through the first period, then doubled the lead from a Elito penalty, after a blatant hand ball in the area, then followed it up with two second half goals thanks to Golding and Gale. The season was well and truly under way.  Welcome back.  We’ve missed you.  Next stop in our tour of the non leagues – Great Wakering Rovers.
Share
Tweet
Share
Pins
Share
Like

After the high’s of Gainsborough a day’s R and R was in order, which was spent hunting down a pub with an internet connection in LN6. Fortunately ASDA came to the rescue and I spent an ho...