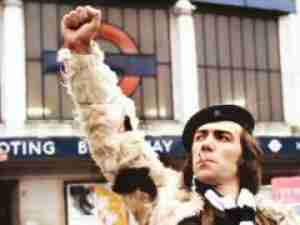 Wolfie Smith…The most lovable revolutionary in history, leader of the Tooting Popular Front.  Mitcham. Named after Robert Mitchum in honour of his fine performance in the 1944  film Mr Winkle goes to War.  Put them both together and what do you have? A united front, in fact a Tooting &Mitcham United.  It is amazing how the longer I write, the more tenuous my introductions can get. Located in a golden triangle of Ryman Premier teams, you would think that business would be booming for Ryman Premier League Tooting & MitchamUnited. Sutton United, just two miles to the south west seem to be nailed on for the title this year, and Carshalton Athletic two miles to the south east seem to be back on the way up after a season in the wilderness. So why isn’t the story from down the on Imperial Fields more positive? 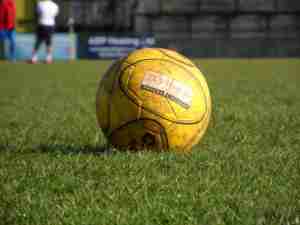 One of the issues is that the league is slowly being populated by teams with bigger budgets, higher attendances and a will to move up. Take the East Anglian duo of Bury Town and Lowestoft Town. Both were promoted last season, Bury from theZamaretto League as part the perennial geographical re-organisation, and Lowestoft Town from the Ryman League One. Chomping at the bit for promotion to the Premier this season is a third team from the region Needham Market, plus Whitehawk from the Ryman League South who stated their ambition by negotiating to play their games next season at Brighton and Hove Albion’s Withdean Stadium whilst their own ground is redeveloped (and of course Brighton moving to the brand spanking new AmexCommunity Stadium). Last week we launched the first part of our Non League manifesto, our agenda for change for the grass roots game. Our ten point plan is designed to stimulate some debate as to how we all can inject some life back into the lowest levels of football. Some of our ten point plan is basic common sense, but since when did common sense and football go hand in hand? So we decided to see what the fans at this level thought of some of our ideas, and what ideas they had of their own. 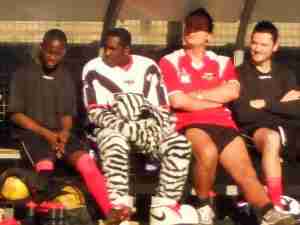 As if I really needed an excuse to come to a game on a Saturday afternoon! After the long drive home from the TBIR Welsh office Christmas Party I did my chores, took Littlest Fuller to a party and was excused from duty at 1.30pm. As a strange quirk of fate, or more so the result of the poor weather during the early Winter, this was the second meeting between the teams in just four days. Back then, Harrow Borough came out the winners.  However, it was unlikely that either team was going to be making their mark in either the promotion or relegation battle this season, so this game had a feel of an Italian end of season game, one of those where neither team has the motivation to win. Top tip of the day.  Never believe SatNav’s.  As the crow flies Imperial Fields lays 11 miles to the west of TBIR towers.  So when TomTom tells me that the 13.1 mile journey should take 44 minutes who am I to argue with it.  I neglected to look at the route it was taking me on and so nearly 90 minutes later when I was still stuck in traffic on Streatham High Road it was so tempting to hurl the useless unit out of the window.  Not only did it decide to take me on the South Circular via Catford, but then down the A23 and then through every High Street in south west London known to man. So my original plan of getting here to watch the second half of the Spurs v West Ham game went out of the window as we eventually pulled up at The Hub, the trendy name for the development where Tooting & Mitcham United now play their games at 2.58pm. Still £11 later (Nearly top marks TMUFC – surely you could let the Under16’s in for free and not extract a solitary pound off them). With the sun shining even the most basic grounds look good, but Imperial Fields is one of the better grounds I have visited this year.  Sure it is modern and has a bit too much concrete here and there, but you certainly couldn’t say that the views weren’t good.  One big main stand that sat astride the half way line and then behind each goal there are raised terraces who two spaceships sitting on top.  The advantage here is if the game is crap you can watch the hockey on the pitch behind.Tooting & Mitcham United 3 Harrow Borough 2 – Imperial Fields – Saturday 19th March 2011 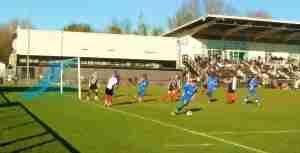 It’s rare that you get to the 89th minute of a game and have to do a double take on your watch as the time has flown so quickly.  This was a cracking game that ebbed and flowed.  Full of quality it wasn’t but that made it more of an entertaining spectacle. As we walked to the side of the pitch a ball was played over the top of the Tooting defence and when the ball was played across the area for an unmarked KarlMorlose to smash home.  Everyone in the ground to see that Morlose was offside, and the linesman flagged accordingly.  The home fans cries of “you thought you have scored” were quickly drowned out by cheers from the small travelling support as for some bizarre reason the referee over ruled his assistant and it was 1-0. A few minutes later and Morlose should have scored a second but a post somehow got in the way.  This had all the makings of a rout.  Tooting simply could not live with the attacking threat of Morlose and Baptiste and if it wasn’t for a smart save from Jamie Butler it would have been another. 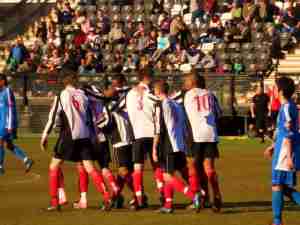 But then from nowhere Tooting found some belief and started realising that Harrow were as fragile as Mavis Riley. Big centre back Dean Marney (not the same ex-Spurs and Hull City Dean Marneywho is now at Burnley I assume) had enough on half an hour, raised his hand to ask the referee if he could go to the bathroom and never returned.  Tooting took this as a good omen and started pushing the ball wide.  From a corner soon after the ball fell to Reece Hall who smashed it home from twenty yards.  One all. Four minutes later Pinnock got passed the full back and squared the ball and there was Jason Henry to put Tooting in front. It was so nearly three a few minutes later when three Tooting players conspired to miss from within the six yard box with the keeper already beaten. We disappeared into the bar at half time and ran into Gary, one of the veterans of the EFW/TBIR Ocktoberfest from last year, and one of the travelling party for next week’s jolly to Antwerp.  The bar itself is as the rest of the group.  Functional but with promise.  Some comfy sofas around the edge, a big screen TV with Sky Sports, of course and plenty of space.  It just needed a bit of soul (maybe a few European scarves up a la The Dripping Pan’s Rook Inn?). The second half never hit the highs of the first, although it was still as engaging.  One of the Harrow directors came over to say hello, and thanked us for visiting them earlier in the season and writing a positive report. That is what I like about Non League football – people are genuine.  He seemed to think that the team could get something out of the game, just as Harrow keeper Jupp spilt the ball into the path of Henry to make it three one. Oops. 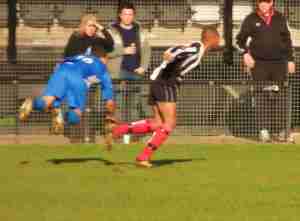 Harrow looked dead and buried but then as usual football has a habit of producing the unexpected.  Or rather, footballers do.  For some mad reason only known to Osa Obamwonyi stuck out his hand and the ball hit it.  Referee Crouch annoyed the home fans for the umpteenth time in the afternoon by pointing to the spot.  Rocky Baptiste stepped up and ignored the home fans chants relating to THAT miss slotted the ball home.  Three two. But it was too little too late.  Despite Harrow pouring forward Tooting simply used the old John Beck tactic and hoofed the ball long.  And why not.  A win was long overdue and gave them some breathing space from the teams at the bottom of the league. We headed back to the car along with 233 others having thoroughly enjoyed the day, if not the result (them not me).  I programmed an alternative route into theSatNav.  14.2 miles – not bad.  First five miles went like a dream and then we came up against a wall of Red and Blue..stupid thing hadn’t factored in Crystal Palace playing at home had it, and had taken us right past the ground.  I thought these things were intelligent! More pictures from the day in  the South London sunshine can be found here.
Share
Tweet
Share
Pins
Share
Like

It’s the second weekend of February. I’ve just returned from a business trip in Copenhagen where the snow lays fresh on the ground and the temperatures barely broke freezing point. Whilst...