Share
Tweet
Share
Pins
Share
Like
There is no doubt that blogging is the future of journalism. Twitter especially has revolutionised the way that stories are broken and shared within seconds around the globe. It is no wonder that 24 of the 25 biggest newspapers in the world are experiencing a significant downturn in sales. People want the news when it happens, not 24 hours later. And that is what Social Media has given us news hungry people. We no longer have to go and look for the news, the news finds us – welcome to the world of Socialnomic. Never has a truer word been spoken in terms of football journalism.

Over the past year the number of websites and blogs dedicated to the general, and even better, the very specific subjects of the beautiful game has risen dramatically. This surge in interest is simple. Content is king. Unless you are producing relevant and interesting content then you may as well give up and use your computer for something else. The A-list of football blogging are all members of something called Socrates. It is not some kind of secret society, or the equivalent of the Brat Pack, but rather a regular meeting of the bloggers to share ideas, talk about, believe it or not football, and have a few beers. At a meeting back in the summer of 2010 we floated the idea of holding one of these sessions outside London. The room went silent, heads turned in our direction and pints of beer fell to the ground at our suggestion. But then we followed it up with an invite to hold it at The Dripping Pan. We didn’t have a clue if the club would allow it, but what the heck. 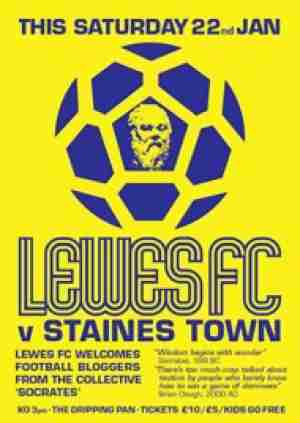 Fast forward six months and Saturday dawned as the first ever Socrates meeting outside of the metropolis. Over twenty of the men that Fleet Street hate to love were on their way down to East Sussex to take in the game between Lewes and Staines Town before retiring to the bar for a few Harveys. All very civilised I am sure. Lewes FC had rolled out the red carpet to everyone, and in light of the positivity that just one draw could bring to the club it was sure to be a win-win situation for all. Socrates would get a day out at a level of football few had ever experienced, and the club would get 20 people waxing lyrically about the club…hopefully. For a place that markets itself as a “party” town, it was very surprising to get a text from Mr Last saying that our original meeting point, The Nelson aka HQ, was actually shut until 12pm.  What?  What happened to 24 hour drinking?  Do they not know their customers were thirsty after a long trip down from London?  Mike Grady, Huddo Hudson, Danny and myself finally found an open door in a pub in the centre of town – our last resort before going for “a coffee”. Eventually we managed to crowbar our way into HQ only to see Cynical Dave sitting at the bar on his third beer,, after he had just rung the door bell and asked to go in.  With him were the second batch of our group.  Possibly the most influential blogger in the FA Cup, Damon Threadgold who we have shared adventures with at Margate and Cray this season, The Guardian’sJuliet Jacques and Ryan O’Connell a freelance Gillingham fan. After some gentle ribbing of each others allegiances (West Ham, you support West Ham  how embarrassing is that!) we headed off on the train to Lewes to meet the rest of the group. Lewes 0 Staines Town 1 – The Dripping Pan – Saturday 22nd January 2011 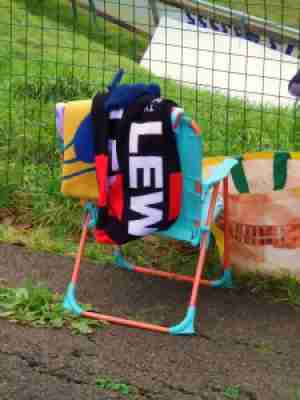 With the assembled masses of the full weight of Socrates we started to make a dent in the fantastic Harvey’s Old Ale.  The club had produced special limited edition posters for all attendees and it wasn’t long before topical issues of the day were being put right.  Organiser Terry Dufflyn of The Onion Bag had brought a fine cast together includingSupporters Direct’s Dave Boyle who of course had an interest in seeing how Lewes’s transformation to a Community Club was going, Jamie Cutteridge who had recently been writing for EFW, Ian King of the fantastic Two Hundred Percent and more.  And then there was Lizzy.  Dear, dear Lizzy.  Football is not her game – cricket is.  She commentates on the excellent Test Match Sofa, but we don’t care – she is always a welcome addition to any gathering. After a run of five consecutive defeats the Rooks had put in battling performances against two of the top teams in the league, narrowly losing to Braintree last week before gaining a valuable scoreless draw at home to Bromley on Wednesday.  Manager Tim O’Shea had got his little black book out again in mid week and brought in more new recruits to bolster the injury ravaged squad.  In came Gareth Hall, an ex-Lewes Ibbo developed youngster from down the A27 at Brighton as well as ex-Millwall midfielder Ali Fuseini, and out went Paul Olima who many felt was having a detrimental effect on team moral. 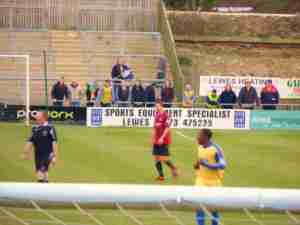 All looked promising then.  That was until the 12th minute when Anthony Barness was forced to limp out of proceedings.  Up until this point the Rooks had looked adventurous.  The Socrates collective seemed impressed and despite news filtering through  that some of Lewes’s relegation rivals were winning, spirits in The Jungle were high.  Then in the blink of an eye it all went wrong. 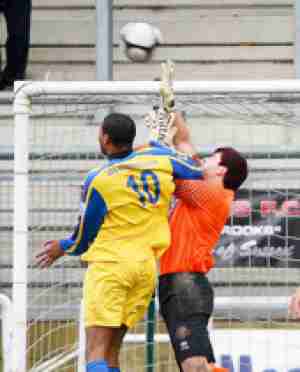 Staines had a free kick on the touchline about 40 yards out.  The ball was lofted into the area, Winterton came to collect and appeared to be impeded by Staines forward Griffiths (see Steve George’s picture to the right) and the ball sailed into the net.  I would suggest 99% of similar incidents you will see would be deemed as a foul against the keeper.  Harsh to say the least and the reaction of the Lewes players to the decision was understandable. To give them their dues, the Rooks kept up the tempo and Chris Breach was desperately unlucky not to see one of his two goal bound efforts beat the man on the line. 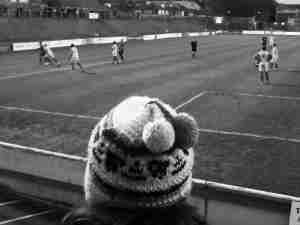 Half time and a chance to refill our glasses with Harveys and discuss the goings on up and down the country.  West Ham were unbelievably winning away from home at Everton, but scores elsewhere in the Blue Square Bet South were concerning.  Still, fate is in the hands of the Rooks and all they can do is beat the teams put in front of them.  Unfortunately, this was not one of those incidences as despite a further 45 minutes of positive forward momentum they rarely tested Louis Wells in the Staines goal apart from one deflected David Wheeler shot. So another 3 points dropped, and with St Albans City, Dartford and Thurrock all winning, the prognosis for the Rooks looks bleak.  There was only one thing for it.  Beer.  We may be bottom of the league, but I am sure twenty of the most influential bloggers will agree, we are Champions League material when it comes to hospitality.  If only leagues were decided on such criteria.
Share
Tweet
Share
Pins
Share
Like

Manchester Untied have reached a deal ‘in principle’ with Antoine Griezmann to bring him to England during the summer transfer window, reports in France suggest. The Atletico...