Romelu Lukaku vs Zlatan Ibrahimovic: Breakdown and comparison of styles

Since his arrival at Old Trafford, Romelu Lukaku has been a massive hit for Manchester United in the Premier League. Having let go of their star Wayne Rooney hadn’t been easy, especially with their premium striker Zlatan Ibrahimovic cast to the sidelines with an injury. However, Lukaku flourished in his role as a centre forward, combining with Paul Pogba in the midfield to take United to the top of the table at an earlier point.

His performances have made him a mandatory name on Mourinho's first-team sheet, but with Ibrahimovic returning from injury, the Portuguese now has to decide between the two for the role of No. 9.

In this article, we compare and analyze the statistics of both the players with insight on their respective playing styles.

At 190 cm, Lukaku is only five centimeters shorter than Ibrahimovic. However, the Swede’s penchant for physical battles is what seems to provide him more physical advantage over defenders than is actually the case. He also focuses more on holding up the ball for laying off to his teammates unlike Lukaku who banks on his finishing skills more than anything.

Having netted 25 times for Everton in the 2016/17 Premier League season, Lukaku kicked off this term with seven goals in seven matches before the injury to Paul Pogba made his statistics take a plunge. He is explosive off the blocks with a shooting accuracy of 47% - 24 shots on target. His skills make him the ideal center forward who you would expect to have high conversion rates and finishing statistics.

In contrary, Ibrahimovic relies on his experience and reads the game better than his Belgian counterpart. He isn’t as explosive as Lukaku, but has the unique ability to dictate the game when he is on the pitch. In his 31 appearances for United so far, he has delivered only 47 out of 118 shots on target, finding the back of the net 17 times. That’s an accuracy of 40% - seven per cent lower than Lukaku.

Also, Lukaku offers far more variety in finishing compared to Ibrahimovic. During the 2016/17 season, the Everton man scored 48% of his Premier League goals with his left foot, 28% with his right, and the rest with headers. The same period saw Ibrahimovic score almost two-thirds of his goals with his preferred right foot.

The Belgian’s ability to drive forward with the ball saw him attempt as many as 104 dribbles last season. While the reason behind this may be attributed to Everton’s lack of quality support, Lukaku’s passing stats at Manchester United aren’t too flattering either. He averages 21.73 passes per game, and has delivered only 15 crosses in total.

On the other hand, Ibrahimovic has been instrumental in creating chances with 1084 passes in 31 matches (13 more per match than Lukaku). He likes to build up the play, dropping deep when needed and pairing up with the midfielders and wingers to create avenues. Unlike Lukaku, who lost possession a staggering 584 times last season (168 times more than the Swede), Ibrahimovic knows how to use his physical attributes to hold the ball against defenders.

When you are talking about 6 feet 2 inches footballers, speed isn’t probably the attribute that you would be looking for. Surprisingly though, Lukaku recorded 21.5 miles per hour against West Ham during the opening game this season. To put that into perspective, Usain Bolt’s top speed while setting the world record for 100m at Berlin in 2009 was 27.7 mph.

In comparison, Ibrahimovic isn’t known to provide sudden bursts of pace, and at 36, it’s not really a fair expectation from him. 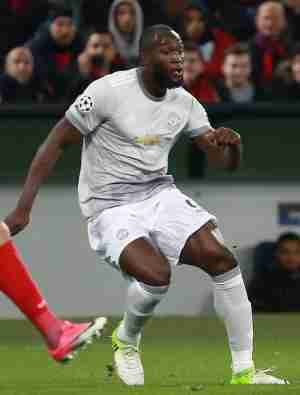 Lukaku is not Usain Bolt, but he comes closer than Ibrahimovic. Picture: Дмитрий Голубович, cc by-sa 3.0

Despite being marginally shorter, Lukaku has dominated the Swede when it comes to aerial threat. Last season, he engaged in 322 aerial duels winning 61% of them as compared to Ibrahimovic who managed 46% success rate from half the number of aerial duels.

This is where stark differences emerge. Lukaku is a player who wants the ball to be delivered to him. He doesn’t want to do the dirty work in the defense, tackle the opposition, or use his strength to bully attacking midfielders. It is evident from his figures at United this season – 0 interceptions, 4 tackles, 12 clearances, 8 headed clearances, 10 blocked shots.

Ibrahimovic doesn’t mind though. In fact, he has already recorded 55 fouls and 7 yellow cards over a season and two matches. With 10 interceptions, 12 tackles, 23 clearances, 18 headed clearances, and 33 blocked shots, he has made it impossible for the opposition to ignore him.

The future holds good things for Lukaku. The 24-year old has already made a name in the football world, having debuted for the Toffees in 2013, but rising to prominence as a prolific goal-scorer only during the 2016/17 season. Under Mourinho, one hopes he will improve further and realize his full potential.

On the other hand, Ibrahimovic drew curtains over his national career last year with Sweden getting knocked out of the Euro 2016. He has had a stellar club career, and deserves to go out on a high at Manchester United.