Portrait of a Legend: George Best

A procession of cars slowly drove along the route to Parliament building under the applause of thousands of mourners–the hearse covered in scattered flowers and shirts.

In the fronting car lay the body of George Best.

“I’m a Cregagh Road man and my brother played with George. This is fantastic, it’s the greatest honour of my life.” said a man chosen from the crowd to attend his funeral ceremony.

Back when the Beatles were releasing their second album With the Beatles in 1963, United scout Bob Bishop was in Belfast, wide-eyed, watching a small boy playing for Cregagh football club. The next day a telegram addressed to Matt Busby arrived in the offices in Manchester: “I think I’ve found you a genius.”

Best joined United at 15. Overwhelmed by the drastic changes in his life and stricken by homesickness, young Best wrote letters to his family who encouraged him to focus on his football. He couldn’t, so soon he fled back to Ireland. Upon return, he had to spend two years in their amateur team as Northern Irishmen could not do apprenticeships in England back then. Soon it got better and at 17, he made his debut for the first team and scored in his second match. He scored six goals that season and helped United win the FA Youth Cup–their first after the Munich disaster of 1958. A year later, he won his first domestic title with the first team, scoring 10 goals in 41 appearances.

By then it had become evident Best was an extraordinary footballer. He preferred to keep the ball close and relied on quick reactions to fend off defenders. His legs and arms waved about but his core body remained anchored. It was this form that made him into an unpredictable dribbler. When two years later United won another First Division title, Best had grown into an indispensable player at Old Trafford. He didn’t carry the whole weight alone. He had become one of the ‘Holy Trinity’ along with Bobby Charlton and Dennis Law. 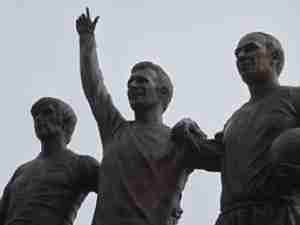 “If Dennis and Bobby didn’t play well, then I did. In the following week if I had a stinker, Dennis would stick a couple in. And then Bobby would take over. It was lovely.” Best spoke about his footballing chemistry with the other two stars.

Fueled by this partnership United strode to their first European Cup in 1968 and were rapidly turning into the world’s best. One obstacle remained in their path. Best’s thunderous sole winner against giants Real Madrid had booked them a place in the European Cup final at Wembley where they faced Eusebio’s Benfica. Eusebio might have received Footballer of Year before this match, but there was only one name on everyone’s lips after it. Portugal legend Simoes later wrote ‘a hurricane passed through the Luz that night, and his name was George Best.’ The Red Devils won 4-1 courtesy of two goals by Charlton and one by Best. If the European map had unreached spots for Best, they certainly disappeared that night.

They called him El Beetle. His story as a rockstar footballer had taken off.

And Best relished the attention, at first. He returned to England with a leather jacket and a cheeky sombrero hat and a huge grin, enjoying the bath of adoration. If Twitter, Youtube or Facebook existed back then, Best would have crashed their servers. Little did he know publicity would keep harping at him for the rest of his career.

In 1969, Manchester United pillar Matt Busby retired, and the club underwent a shaky period of managerial changes. The new managers sought to establish their position over the players but rarely stuck long enough for that to happen. In those times of change Law and Charlton left in 1973 and Untied went on the descent. Best became disillusioned and started to crumble under the mounting pressure to pull miracles on the pitch by himself. He sought relief in the only way he knew: drink and women. By then the media had started asking whether United needed his unruly behaviour. Best struck back by scoring six goals in one match. But the pressure of constant lack of privacy and growing responsibility were taking their toll on his mind. It got so much out of hand he once stayed in the flat of female friend for four days skipping every training session because of the dozens of reporters who waited for him to come out.

Such was Best–unequipped for living in the public eye. 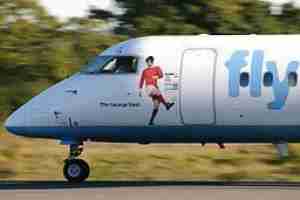 He fled to Spain where he thought he would find privacy and recuperation from his footballing worries. What he found instead was a horde of reporters wherever he went. Then things took a turn for worse when he suffered a thrombosis while on his usual drinking session. Best was lucky to have it in his leg, any other way would’ve meant an end to his life. He travelled to England to be hospitalised. His football career had been put on hold. Would he ever play again?

It took an endearing visit from retired Busby to motivate him to seek the smell of the grass again. “You’ve gotta get back out there.” Busby told him with a heavy heart. He couldn’t stand United being robbed of Best’s talents. By then Tommy Doherty had become manager. He secretly drooled at the prospect of having the Northern Irish star back in his team. So when Best recovered he offered him a way back in, but on the condition he got in shape. Best agreed and trained arduously for the next three months only to reach an impassible divide from which there was no return. After a night of drinking, he missed a weekday training session, and on match day he was pulled aside by Doherty who told him he couldn’t play because of his earlier caprice. After months of hard work to return, it was the final nail in the coffin.

After several loan spells in England, he moved to California in 1976. Magician Pele was playing in USA at the time. The heart of the hippy lifestyle was still beating. That and the little anonymity he could find there seemed to Best strangely alluring. He opened a night club on the beach in California where he enjoyed the sweetness of life, interrupted only for a short return to England to play for Fulham. 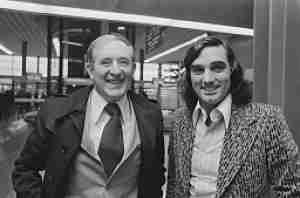 Best loved booze, women and football and in California he found a golden haven.  But his fast lifestyle made him as many enemies in club owners as friends and lovers in the bars. Over the next 10 years he switched countless of clubs around the world including in Australia, China, Canada and Scotland. He never reached the footballing heights from United again, but his flashes of brilliance shadowed him wherever he went. He held no regrets.

“I do what I want to do.” Best spoke for a documentary. “I’m fed up with people writing me off–it’s what they’ve done for the last 20 years. I am my own man and always have been. Right or wrong that’s my philosophy. That’s the way I believe life should be led.”

There is joke going around that Chuck Norris once sprinted 100 metres backwards so he could see what second place looked like. George Best never ventured to try. He bragged a compulsive need to outdo everyone at everything–be it when playing football, drinking or even when playing pool.

He was a man leading a life which culminated in sitting alone with several full glasses of wine and a pint of beer on the table in front of him. ‘What went wrong with this man?’ you might ask. Nothing. This question never popped in his mind. He led his life the Bestie way, and when those who couldn’t catch up trailed behind, he left a glass for them on the table as if they stayed with him in spirit.

No other alternative ever existed for Best. He was what he was, and he knew it well. Asked whether he wanted to change in his later years, he flashed a smile and said: ‘Yes but can’t even if I try’. But what made him into such a charismatic personality was he knew his flaws and accepted them.

Best had three sides to him. One was the man on the green meadow and its counterpart–the playboy with boyish charms who loved life as much as life loved him. He blended them well to form the public image most will remember. However, his third side was his closest life companion: the man with compulsive fear of being alone. For all the dazzling dribbles Best did on the pitch, he left his best one for outside of it. In booze and women, he found recluse from himself.

It is bizarre how some consider Best an underachiever because of his lifestyle. He led United to two league titles and the European Cup and won the Ballon D’or in 1968. The questions those people should ask themselves are: ‘How many alcoholics receive hundreds of visitors to their graves?’, ‘Would he have been Best if he didn’t drink?’ Useless questions. ‘Ifs and maybes’ were something out of Pluto for him: regrets about his life–out of Mars. His only regret was not playing in the World Cup. That was ours too.

“Don’t die like I did.” Best said on his deathbed. He dies soon after on 25 November 2005 due to lung infection and multiple organ failure cause by the many alcohol-fueled years. He would have preferred to die in the embrace of a Miss World sipping the most expensive champagne he could find.

At least this week we weren’t waiting around for games to be called off.  After the rain started falling on Tuesday night it simply didn’t stop.  Some clubs had made their decisions yeste...