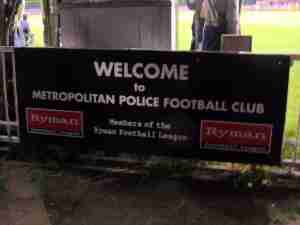 Imber Court is the Sports and Social club for the Metropolitan Police and is as well appointed as you would expect.  The complex has tennis courts, squash courts, swimming pool, gym, a number of bars and of course the football ground that has a capacity of 3,000. The ground has one very large stand and one covered terrace behind the goal.  Apart from that it is simple standing behind the barrier.  There is a refreshment bar next to the main stand, whilst beer is available from the main bars just outside the ground. How to get to Imber Court If you are travelling on the A3 south from Central London, Pass New Malden, pass under Tolworth Towers, under Hook Road A243 underpass then immediately take left slip road off onto A309, follow for 3 miles to large Scilly Isles RAB A307, take 3rd exit out, north onto Hampton Court Way A309 towards Hampton Court, at 1st RAB turn left into Ember Court Road, Ground 300 yards down facing you on other side of T Junction. 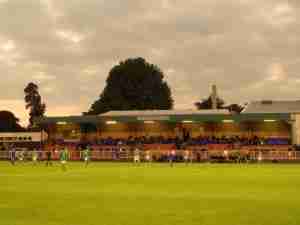 If you are travelling on the A3 north from M25 at Junction 10 and onto A3 Esher by pass, turn left at A244 towards Esher, turn right at A307 Esher High Street, follow road down past Sandown Park Racecourse on your left, to large Scilly Isles RAB, take 1st exit out left onto Hampton Court Way A309 towards Hampton Court, at 1st RAB turn left into Ember Court Road, Ground 300 yards down facing you on other side of T junction. Parking is free at the ground and on the surrounding roads. The nearest stations are both served South-West Trains from Waterloo. Thames Ditton is the nearest and is a five minute walk away. Come out of the station and turn left onto Ember Court Road, cross the main road and the roundabout and then straight on – the ground is 200 yards down this road. From Esher it is a 10 minutes walk north from the station, following the road around the bend and the ground is on your right. Admission to Imber Court Admission is £9 for Adults and £5 for Concessions.  Under 16’s are charged £1.  Programmes are available inside the ground for £1.50 Our Last Visit – August 2011 “All Police leave cancelled”…That was the message pinned up to the notice board at Imber Court two weeks ago.  The Notting Hill carnival was in town and worried about the risk of a repeat in the “civil disorder” all spare members of the police in London were put on standby.  This meant that Met Police’s games versus Wingate & Finchley and Leatherhead were moved.  Despite what people may think, there is no longer any requirement for the team to be made up of serving police officers but the administrative staff at Imber Court, the home of the Met Police Sports and Social club are. 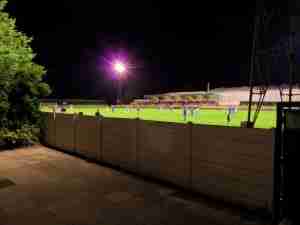 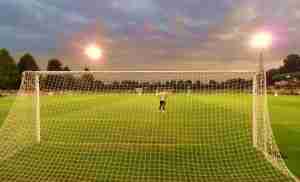 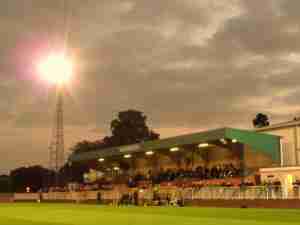 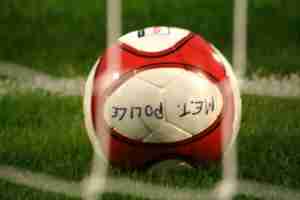 About Leylands Park Leylands Park is a very pleasant little ground.  Unfortunately it seems like the clock is ticking on the club’s tenure here as it is council-owned and they are keep o...