Share
Tweet
Share
Pins
Share
Like
Following on from our theme about change in Non League football, Andy Ollerenshaw, author of fabulous From Wick to Wembley and one of the best football photographers in the land,David Bauckham travelled north to visit Marine and understand what they are trying to do differently. The scene for the first time visitor as you reach the crest of the dunes that protect Crosby from the Irish Sea is both surreal and breathtaking in equal measure. One hundred cast iron men dot the length and breadth of the beach, staring silently away from the mainland and out over the waves. This is Antony Gormley’s acclaimed public art ‘Another Place’, his life size figures cast at foundries in West Yorkshire and West Midlands and transported to a two mile stretch of Sefton sand. Two miles behind and inland, nestled in amongst the houses in Crosby’s College Road sits the football ground of Marine AFC. In the same way that Gormley’s men have their sights focussed on more than just their immediate surroundings, Marine AFC is a football club whose focus is set way beyond the boundaries of its compact Arriva Stadium. This is the tale of a trip north to see and hear at first hand how Marine take pride in their community role and the parallels with another coastal football club some 230 miles south. 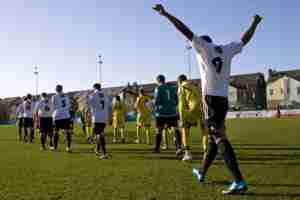 The Northern Premier League encounter between Marine and Matlock Town was the motive for our visit to Merseyside, a journey instigated by Eastbourne based photographer David Bauckham. This late February tie was an important fixture in the quest for a valued play-off place. The League’s top two goal scorers were on view, one from either side, and both teams were in the middle of a good run of form. It was little surprise that we witnessed an entertaining affair, with the Derbyshire visitors ending the afternoon with a 4-2 win and a three point boost. Matlock’s Ross Hannah netted three times to take his season’s total to a quite staggering 42. If the game was good, the welcome and hospitality we received at Marine was even better. Marine is a community club in every sense and was voted Football Foundation Community Club of the Year in both 2009 and 2010. This is no mean feat as the non-Leaguers rely on the same customer base as their more illustrious red and blue Premiership neighbours. The tangible sense of pride at the club’s place at the heart of Crosby, and the hinterland beyond, was evident from the moment we met lifelong fan and dedicated club man Barry Lenton. Using the word ‘dedicated’ seems rather inadequate. Lenton, who has been involved with Marine since 1963 in a variety of guises and roles, is the club’s Community Officer. He is the quintessential non-League volunteer, of whom there are many throughout the pyramid, but his daily commitment and loyalty to the club over a period spanning six decades is impressive by any measure. As a youth Lenton spent the summers building up the ground’s terracing “laying sleepers for a free shandy”. In 1968 he established Marine’s first supporters’ club and for many seasons ran the coaches to away games. In fact he has turned his hand to most things, whether its painting terrace walls, collecting used football boots for an African charity, overseeing the knitting of team scarves for the club shop or arranging local school penalty shoot-outs on match days. The list appears endless. 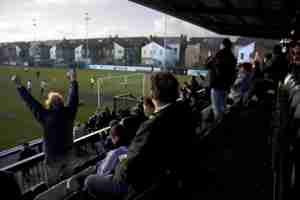 In a typical self effacing manner, it is not Lenton’s own contribution to the club that he feels important but Marine’s place in the community and the sense of family. This he cherishes and holds dear, a sentiment echoed by other club committee members including Chairman, Paul Leary, who Lenton cites as playing a significant role in developing the strong community ties. Pressed on why Marine and the community mean so much to Lenton, he keeps it simple: “Marine feels like home, it’s a family, it’s unique.” The Football Association has a formal scheme that recognises work done by football clubs in the community. An extension to the FA Charter Standard, the FA Community Club award is given to clubs that “offer opportunities for players irrespective of age, gender, religion and ability”. Bauckham, my travelling partner for the day, has strong ties with another community club, Eastbourne Borough. The parallels between the south coast club and Marine are striking. Eastbourne Borough is a relatively new club, founded by youth team members as Langney FC in 1964. The Sussex outfit is an FA Community Club; what’s more they are one of a very small and select band of football clubs who are formally registered as a Community Interest Company (CIC). In 2008 they were the first CIC to be officially recognised by the FA. A CIC is a limited company created for the use of people who want to conduct a business or other activity for community benefit, and not purely for private advantage. This is achieved by a “community interest test” and “asset lock”, which ensures that the CIC is established for community purposes and the assets and profits are dedicated to these purposes. Other CIC clubs in the country are Bishops Lydeard, Canterbury City, Prescot Cables and Stenhousemuir. Bauckham feels that both Marine and Eastbourne have much in common, yet could also learn from each other’s approach; thoughts of a ‘twinning’ opportunity may yet come to fruition. 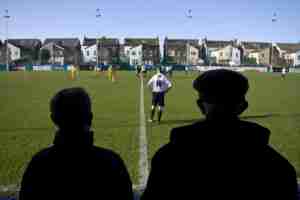 Bauckham talks discerningly about topophilia, the love of place or location. In the psyche of the committed football fan this connection is manifested through the club’s ground, the permanent feature that provides a stage for supporters to bond with their team. Managers, players and owners may come and go but the terrace where you stand, the tea hut where you buy your Bovril and the clubhouse where your friends gather, they all remain. Marine, Eastbourne Borough and other community clubs in the country not only recognise this but actively manage it as an important facet for survival. Placed at the centre of the community, thriving football clubs understand the value of using the club facilities for more than just the round ball game. Surviving on crowds of a few hundred or less alone makes life unsustainable for many non-League clubs – Leyton and Windsor & Eton recently testify – and there is a view that the community model that anchors a club firmly into its locale, and taps into a rich and vibrant community, is a financially more stable model. Quite fittingly, within days of our visit, Marine was granted FA Community Club status. I got the impression that the previous lack any official FA recognition didn’t weigh heavy upon Marine but the club has since acknowledged that this latest award has given them “a major boost”. The accolade, which will now sit alongside those from the Football Foundation, will I’m sure be received with a large spoonful of humility. That’s just the way they are at Marine.
Share
Tweet
Share
Pins
Share
Like

When I turned ten I was allowed to stay up until 9.30pm on School days. Not that there was much to amuse you during those early days of the Eighties. We only had three (THREE!) TV Channel...