Sir Alex Ferguson has praised Jose Mourinho for his progress since the start of the season.

United's most successful manager of all time has reiterated his support for the Portuguese, who took charge of United in the summer, and he believes he is still the right man to take the club forward, following the unsuccessful stints by David Moyes and Louis van Gaal.

“I think he has done a great job.” Ferguson told the BBC.

“You can see he has got to grips with the club. The team is playing really well and he has been very unlucky. He has had six 1-1 draws and in every game he has battered the opposition.

“If they hadn’t had all these draws, they would be there challenging Chelsea. That is the unfortunate part, but he is going to have to live with that.” lost a game since

Manchester United are on an undefeated run since October’s loss to Chelsea after a difficult start of the season, but according to Ferguson, Mourinho’s more relaxed and collected attitude is positively affecting the team’s performances on the pitch.

“There was a period earlier in the season when he wasn’t getting the decisions and his emotions boiled over. You see him now – he is calm and in control." 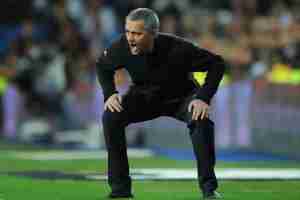 Picture: In Mou we trust

Mourinho’s passions got the better of him on two occasions when he was sent to stands after his team failed to capitalize on their domination against Burnley and West Ham.

“The team is mirroring the manager,” Ferguson said.

“On Saturday at Stoke, they played to the last kick of the ball. They never gave in and got their rewards to take something from the game with that great Rooney goal.

“And did you see what he did? Ran to the halfway line. No celebration. Pointed to the ball as if to say ‘get it, we are going to win this’. That is exactly the spirit Jose has created.”

Speaking today in a press conference at the Manchester Untied grounds, Mourinho said: "He is completely free because I told him that this is his house always and forever.

"He has traveled with us just a few times but this is his club."

Manchester United travel to the KC stadium on Thursday to meet Hull City in the EPL cup semi-final.

Paul Pogba has failed to live up to the expectations dragged with the tag of ‘world’s most expensive footballer’ since his move to Manchester United for a world-breaking...