Share
Tweet
Share
Pins
Share
Like
And did they get you to trade your heroes for ghosts? Hot ashes for trees? Hot air for a cool breeze? Cold comfort for change? And did you exchange a walk on part in the war for a lead role in a cage? How I wish, how I wish you were here. 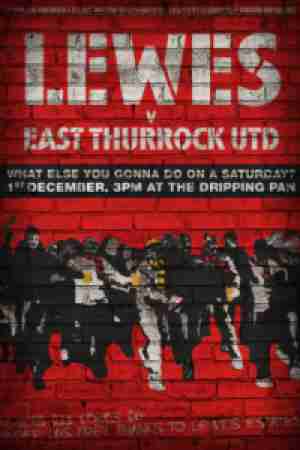 For us Non League fans, our season can often be over before the Christmas decorations go up. Unfortunately, the various footballing authorities front-load the season with cup fixtures meaning that by the end of November the leagues look imbalanced with some clubs playing 30% more league games than others. Down at the Pan our final cup flame was extinguished this week when Sussex League side Eastbourne United beat the Rooks 2-1. Make no mistake – the club wants to win every game and this was a blow – with the likes of Crawley Town and Brighton really taking the competition seriously, the Sussex Senior Cup is the best route to a trophy. Front loading is also the term clubs use for setting playing budgets higher at the start of the season then reducing them over the season as the club is eliminated from cup competitions. But to some outsiders, the natural and planned reduction of the weekly budget is seen as a sign of panic. Lewes set their budget in this way, allowing manager Simon Wormull to “overspend” in the early part of the season, on the clear understanding that by Christmas it will be brought back in line. Of course there was always the hope that a decent cup run would deliver some good prize money which in turn may go into the budget. In fact some clubs will forecast a level of cup prize money in their budget setting, which is always dangerous. So this week, with the road to the Amex (the venue for the Sussex Senior Cup) was firmly closed for another season and accordingly manager Simon Wormull made cuts to his squad accordingly. 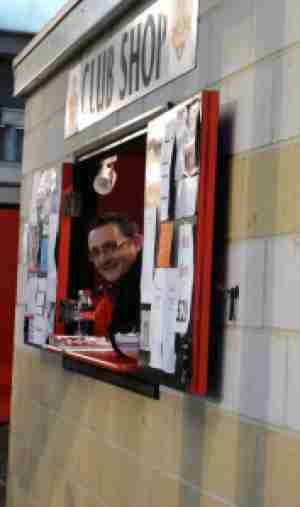 To some outsiders this was seen as a sign of impending chaos and doom. To the rest who have a grasp of what’s going on it was disappointing, but all part f he transition of a club into a self- sustaining entity. Very few clubs can ever say they reach that financial plateau but that’s the aim at Lewes. So three players light, The Rooks prepared to take on the Rocks of East Thurrock United, who themselves had gambled and won in last season’s budget stakes with a fantastic cup run all the way to the FA Cup First Round where their tie against Macclesfield Town wa shown live on TV.  Despite an indifferent season so far, Lewes hadn’t actually been defeated at home in the league since the opening day back in the August sunshine. The sun was out here too, but the mercury failed to rise much above zero all afternoon.  Manager Simon Wormull was celebrating his 36th birthday in style, by naming himself in the centre of midfield.  Whilst the engine may only get into second gear these days, the range and accuracy of passing is still as good as it was when he was a youngster at Tottenham Hotspur.  With Nathan Crabb also back in contention the Rooks were hoping that this would be an afternoon they would be getting the Rocks off. Lewes 1 East Thurrock United 1 – The Dripping Pan – Saturday 1st December 2012 Sometimes in football you just have to be happy with what you have got.  For an hour of this game, played on a chilly afternoon, Lewes were by far the better side and should have been three or four up.  But then the deficiencies of the current situation kicked in, with a small squad and an inexperienced bench meaning the team simply ran out of gas, allowing the visitors to equalise and almost deservedly win the game. 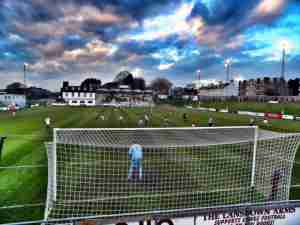 As walked down to the Jungle as the game kicked off, the Lewes fans wondered which team would turn up.  The one that battered promotion-chasing Lowestoft Town (twice) or the one that capitulated to County League (Division two as well) Eastbourne United.  For the first half hour it was the former as it seemed that Wormull had balanced the side perfectly, with Walder doing what he does, snapping and snarling at the opponents, Brinkhurst able to attack down the left and Crabb and Godfrey busy up front.  It was no surprise when Godfrey put the Rooks ahead on the 26th minute mark. One should have been two (or three or four) when Crabb, Schaaf and Godfrey again all went close before the break but we had to make do with just the one as we headed for the Board-a-kabin for our half time treats. The second half saw Lewes start strongly with Breach’s header rolling along the line and then Crabb “ghosting” in behind the defence but seeing his chip just miss the target.  I was due to write the report for the Non League Paper and was tasked to slip in the word Ghosted and Carbuncle…the former made the edit, the latter is still probably laying on the editors floor somewhere. Alas with the team running out of steam, it was the visitors who finished the stronger.  Two tactical changes in the 70th minute saw the energy levels increase and it was no surprise when Newby drove the ball home from an unmarked position.  The final twenty minutes saw the Rocks have a goal disallowed for offside, a good shout for a penalty turned down and another great save made by Thorp from point blank range.  It wasn’t the best twenty minutes of my season so I went and cheered myself up with burger.  “Chedder, Burger Cheese or Stilton”…That in itself lifted my mood as Lolly muttered “disgusting moldy cheese” under her breath as I tucked into some Sussex Blue to go along with my Harvey’s Blue.  Football may be more important than life and death, but beer and home-cooked food top that anytime. 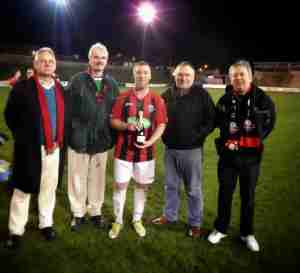 So we had to make do with another draw.  Mid-table is becoming a familiar home to Lewes this season, and as Worms accepted his man of the match award from the Lewes Forum members, he could only look forward with some trepidation – Lewes’s next three weeks sees them play the teams in first, third, fourth and fifth.  After that performance who’s to say that Abramovich wont come a-calling before the year is over.
Share
Tweet
Share
Pins
Share
Like

As a fan of Non League football, my interest in the FA Cup normally dies for the season around December time.  By then I have stopped moaning about the FA never updating their website wit...