Share
Tweet
Share
Pins
Share
Like
So six down, four to go in our agenda for change for the Non League game.  Parts one and two have gone down like a bacon sandwich on a hungover Sunday morning.  Finding three (you will see why not four at the end of this post) was incredibly hard as there are so many simple things we could do to change the game for the better.  So please excuse me if your “hot button” has not been included.  There is still time to contribute!

7. Make Non League Day a firm fixture in the calendar James Doe deserves a medal for making the first ever Non League Day last September.  Not only did he have the energy to say “right let’s do it” but he was also able to get national media attention to the day. In short Non League day – what a brilliant idea!  My Non League team of choice Lewes FC hosted Hampton & Richmond Borough on a glorious sunny day and saw 694 fans flock into The Dripping Pan, up more than a hundred on games in previous weeks.  We also saw the likes of Jonathan Pearce, Mark Williams (From Fast Show and Harry Potter fame) and Dave Lamb (The voice of Come Dine with Me) come along to support their local club. For those of you who have no idea what Non League Day is or was then shame on you!  It was a chance for all of those plastic Premier League and Football League (well, the higher placed clubs) to remember that there is more to life than a sanitised stadium, overpriced and undercooked food and players faking injuries.  It was a celebration of our Non League game and an opportunity for everyone to enjoy a game at the grass roots level of the game. So what does it take to become a regular fixture on the calendar?  Three things really. First.  Make sure that the FA recognises the day and therefore stipulates that home internationals are not played at 3pm on a Saturday (or preferably on a Saturday at all).  This day happened because the home game versus Bulgaria was played on the Friday night meaning no Premier League, nPower Championship and around half of the League One and Two games were played on the Saturday.  Take the game last weekend against Wales – couldn’t that have been played Friday night?  They play rugby union internationals in Cardiff on a Friday night without any issue? Or Sunday? Secondly.  It takes a willingness of the clubs involved to adopt it as a special day.  Clubs need to do more to attract fans for this.  Many did last time out – Some offered 50% discount on admission, others put on special events.  But all clubs need to adopt the day and do something, otherwise it will be just like any other home game. Thirdly.  Whilst I do not particularly advocate sponsorship for the sake of it, I actually think this would benefit from some sponsorship.  Why not make it like a “Red Nose Day” for clubs – do fundraising events, give some cash to grass roots football charities.  And get a national sponsor of the day who can use their marketing resources to really get the message across. I would also suggest that it is held twice a season, planned so that ALL Non League clubs could benefit from hosting a game each season.  So in September it is Lewes versus Hampton & Richmond Borough, and then in March or April it could be the reverse fixture.  And let’s recognise the contribution of possibly the greatest man in Non League football,Tony Kempster (idea thanks to Danny Last) by naming the day after him….and getting at least a CBE for James Doe for his services to football. 8. Alleviate the financial catch 22 of promotion This idea comes from Charlie Dobres, one of the directors of Lewes FC.  The cost of being promoted up the non-leagues can be crippling, each promotion seeming to cost almost exponentially more due to increased player wages, ground grading requirements, longer travelling distances and more. The step-up to Blue Square Bet Premier in particular, where almost all teams are now full-time, is a killer for small clubs. Increased crowds and sponsorship do not cover these promotions, so the inverse economics of non-league football is such that, the higher you go, the bigger the losses. Every time aspires to play at a higher level, but at what cost?  You can see the division in class both on and off the pitch between a Hayes & Yeading or a Histon, and a Luton Town or a York City. 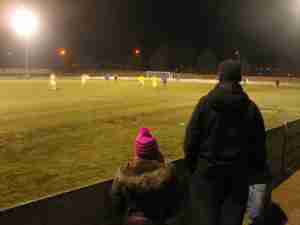 Occasionally you are surprised by teams who seem to come from nowhere.  Fleetwood Town this season are making a real challenge to the top six but are being bankrolled.  Crawley Town?  Do not get me started on that whole situation?  AFC Wimbledon, a club built on solid community foundations. So I would propose an ‘Escalator payment’ for promoted clubs. Funded by the Premier League/FA it would make a grant to promoted clubs sufficient to cover one season’s additional costs in the league above. This would give clubs more time to adjust to the step up and act as a safety net. At the moment, some clubs’ biggest fear is, ironically, the ‘threat’ of promotion. You can look at it as the other side of the coin to the parachute payments that a Premier League club gets on being relegated. We all know that most clubs are held together financially by wealthy(ish) benefactors. That’s their choice, but the downside is an innate long-term instability in the club i.e. what happens when that person(s) goes away? So I propose a cap on the proportion of club income that can come from donations. Perhaps starting as high as 50% in year one, but ending up in year three (to create a soft landing) as no more than 20%. This would encourage and give clubs time to both replace this sugar-daddy money with genuine recurring, earnt in both gate receipts and commercial activities.

9. Scrap the ground grading farce Following on from the financial catch 22 we have ground grading.  Take a look at the picture on the right?  Idyllic setting isn’t it?  This is the home of VCD, last season of the Ryman League North.  2009/10 was the first season at this level and they more than held their own.  Crowds were as you expect modest, in keeping with a regionalised league were attendances do not often break the three figure barrier.  They were accepted for promotion from the Kent Premier League to the Ryman in May 2009.  A year later after they finished in a respectable 8th place.  But then they were told that their Oakwood Road ground was not up to standard and they were relegated back to the Kent Premier League. So a year after their ground was good enough to host crowds of 100 people they were told it wasn’t fit for the job despite them spending not insignificant sums of improvements.  As you can see from above – idyllic.  Two small stands, perimeter fencing, floodlights – all ticks in the boxes.  The issue was a 1metre wide path around the pitch.  It appears that this should have been a metre wide.  The club were given until mid June to sort this and they were on track to complete this work when all of a sudden in May the Isthmian League said “sorry but you have been relegated”. 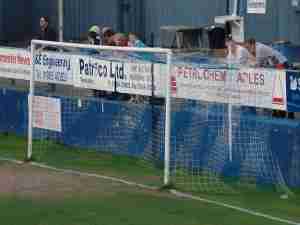 I have no issue with certain criteria needing to be met before clubs can play at a higher level, but the whole March deadline means more than often clubs have to gamble on paying for work on the slim chance they may be promoted.  Suppose that your team sits in 10th place in early January, five spots off the play offs but quite a few points away.  If you put a run together you could make 5th spot and thus get to the playoffs BUT there is a slim chance you may go up.  Only problem is you need to carry out a number of upgrades to the ground at a cost of several thousand pounds.  You only have a small window to carry out this work so you go ahead. Two weeks later your team suffers three serious injuries.  Then the bad weather starts and your next few home games are cancelled.  Sound familiar from the previous few seasons?  So extra money is needed just to get a team out yet there is no money coming through the turnstiles.  That is the issue.  Clubs have to gamble far too early in the season.  Why not make the deadline say in May or even later? What is the difference between playing in front of 75 in Step 5, 100 in Step 4 and 250 in Step 3?  Or is this simply rules for the sake of rules? So there we have it.  Nine sensible, logical and workable ideas.  But we all know that those three bedfellows do not resonate with the powers that be.  I will be sending the whole list to the FA and the respective Non League administrators for their comment, but I doubt I will get a response.  But before that I want a number ten.  After all a list is not really complete unless it is a top 10 so I want YOUR ideas for the tenth item.  We have a few such as change the playoff system so that it involves a team from the league above, change the regionalisation of the leagues and scrap the rule that says all teams over a certain level have to produce a match day programme. So in the words of Deliah, “Let’s be ‘aving you”
Share
Tweet
Share
Pins
Share
Like

About Marsh Lane The stadium is new but basic and reportedly constructed in a short space of time and on a low budget when the club were in the lower reaches of the Southern League. A sh...