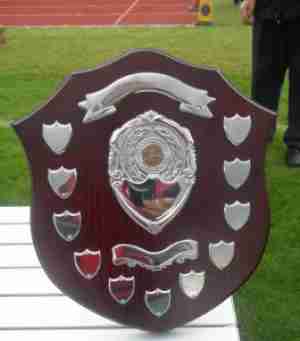 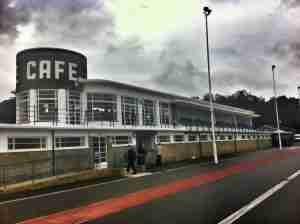 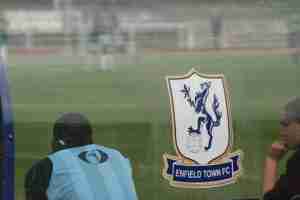 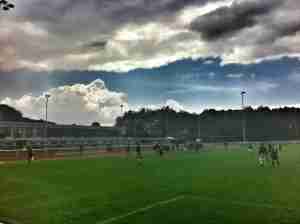 To demonstrate the importance of fan involvement in their team’s progress drawn games in the Supporters Direct cups are decided by a fans penalty shoot out at half time.  So if the game is heading for stalemate, both teams will know who will be crowned the winner.  So at half time I donned the keeper’s gloves to see if I could save more than Joe Hart and win us an advantage in the a game.  Alas, the theory that the side that misses first goes on to win did not hold true as I missed my spot kick, although I redeemed myself by saving the next one.  However, young Sam’s miss in the final spot kick meant it was advantage Fisher going into the second half.  You can relive the drama of the spot kicks here. After a very tight first half and the drama of the spot-kicks we headed inside for a beer.  Unfortunately, the crazy licencing laws in this country meant that because Wrexham were playing later in the afternoon, alcohol could not be taken out of the bar area and onto the terrace.  This was despite the fact Wrexham had brought down an under 18’s side.  If ever there was a law that directly impacted the ability for small clubs to make money, this is it.  No more than 100 fans were watching this game, yet the licencing laws are the same as if it was a 90,000 capacity game at Wembley Stadium. The second half was punctuated by a number of stoppages for substitutions.  Simon Wormull brought himself on after an hour and came the closest to scoring with a couple of long range efforts that the Fisher keeper(s) had to get down well to save. As the bright sunshine was replaced by more torrential rain the referee blew the final whistle.  Lewes had won the Shield that had been held for nearly two years by Scarborough Athletic.  There was a small presentation to skipper Steve Robinson and time for a quick team photo before the players left the pitch. 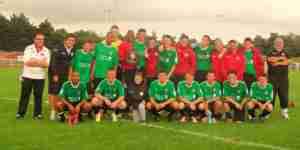 This is obviously early days, but pre-season games are all about the performance and there can be few complaints about the Rooks efforts in this game.  Lewes finished last season with 8 wins from 10 games and so it was important to get back on the winning bike as soon as possible.  For me, well it was game number one of the new season.  105 is a tough ask, but we will have a go at beating it! More pictures can be found from the afternoon here.
Share
Tweet
Share
Pins
Share
Like

One of the classic adverts of the 1980’s was surely the Monster Muncher who was not satisfied by the Taj Mahal, The Leaning Tower of Pisa and The Empire State Building before he came acro...