Gabriel Jesus vs Kylian Mbappe: Breakdown and comparison of styles

Watching Ronaldo and Messi dominate at will gets unbearable after 15 years. It’s been a long time since we’ve seen an influx of fresh talent of a similar quality. Thankfully, Kylian Mbappe and Gabriel Jesus are something to look forward to, excluding Neymar and Paolo Dybala of course.

But who is better? This article will examine the similarities and differences between the two. 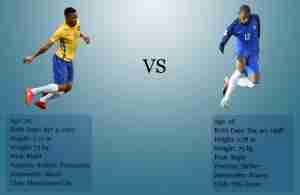 Jesus is just three centimeters shorter, but analysis of videos of the two players reveals a starker contrast. Mbappe’s physical advantages are obvious. The French striker has got a lot of power in his legs allowing him to make longer strides. He also expends more energy in games than Jesus.

It may be that Brazilian laid-back attitude, but Jesus is clearly at a disadvantage here. Mbappe's style is comparable to a tornado. He tames the ball and brings it to an arrested state which invites a reaction. He then nudges it forward with a sudden burst of energy.  Jesus does not have that. Instead, he relies on keeping the ball close to his feet where he can control it.

Betting against a Brazilian on skills and tricks is just suicide. Most Brazilian footballers have an ingrained joy for playing with the ball even when they don’t have to. Jesus is no different. He likes to chip the ball over his opponents, to keep it close and caress into different kinds of tricks. He is slow, but he’s got quick reactions which usually puts him at an advantage over other players.

This said, Mbappe is not bad as well. The young striker has something akin to prime Henry. His explosiveness and long strides are usually just a touch away from leaving an opponent behind.  While he has a killer feint shot, he’s got a less developed skill repertoire compared to Jesus.

How much do you think Jesus costs nowadays? He’s certainly not worth £170 million. But Mbappe is. Now, apply that very same ratio to their pace. The French international is one of the fastest guys around. His speed allows him to own the front line – to play wide as well as centre.

Jesus, on the other hand, is more suited to slower tempo. His lack of speed requires of him to think ahead - to calculate his next move before he acts.

Pep Guardiola has pinpointed Jesus’ best position as a support striker. Jesus has played as a winger, striker and teraquista. We can see why Guardiola would say that since the support striker is the middle ground of all those positions. What we can say with assurance is he’s got the skills and composure to dictate the game from the centre of the park.

Mbappe, on the other hand, is a bit different. His speed is his standout attribute, giving him the possibility of playing on any position in the forward line. This makes him a valuable and adaptable player.

Even though Jesus already has two headed goals in the bag, he has recently admitted that he is afraid of playing with that part of his body because of an injury in his childhood.

Mbappe has four headed goals to his tally already.

The contrast between the two is startling. One the one side we have a Brazilian boy who learnt to play on the dirt pitches of a military prison in Sao Paolo, on the other, we have a French kid who joined one of the world’s best youth academies in Clairefontain.

The common ground is that nobody doubted their success. Jesus’ youth coach had predicted he would become a Brazilian international when the striker was 14.

Mbappe was perhaps luckier at thhe same age. He’s been closer to the European top-tier football epicenter, coming on the radar of clubs like Real Madrid and Valencia rather early.

The future looks bright for both.

Mbappe is en route to becoming the second most expensive player in football history should PSG opt to sign at the end of his loan spell next summer. He is one of the most desired players in Europe and has been compared to Arsenal legend Thierry Henry.

Jesus is Pep Guardiola’s darling. He’s also received endorsements from some of the football legends among which Ronaldinho. They must know what they are talking about. Jesus’ performances hint at a very rosy future and perhaps a place among the best.

Get on down to the Rook Inn