Chelsea legend Frank Lampard has announced his retirement from football today at the age of 38.

The English midfielder, who finished his career at New York City, won 13 trophies in record-breaking 609 appearances over 13 years with Chelsea.

Lampard says that he has taken the decision to quit football despite having received “a number of exciting offers to continue playing at home and abroad.”

He wrote on his Instagram account: “After 21 incredible years, I have decided that now is the right time to finish my career as a professional footballer. I’m immensely proud of the trophies I’ve won, of representing my country over 100 times and of scoring more than 300 career goals.

Lampard proceeds to extend his gratitude towards the people that helped him throughout his career and says: “Of course, the largest part of my heart belongs to Chelsea, a club which has given me so many great memories. I will never forget the opportunity they gave me and the success that we managed to achieve together.”

Lampard joined Chelsea from West Ham in 2001 and scored eight goals in his first season at Stamford Bridge. He won his first trophy with the Blues in 2005, the same year he finished second only five votes behind Brazilian Ronaldinho for Ballon D’or.

He continues: “All I can say is from the day I signed until now and going forward, I’m eternally grateful for everything and to everyone. Chelsea fans gave myself and my teammates such incredible support. Their passion and hunger drove me on personally to give my best year after year. I couldn’t have done it without them.” 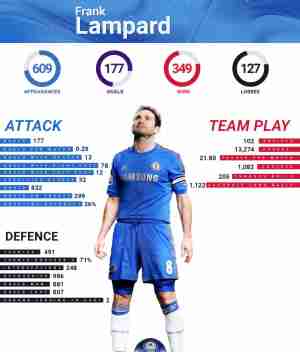 Frank Lampard's Premier League statistics are impressive on their own.

The end his illustrious playing career however does not mean he is parting ways with football as Lampard has revealed he would go into coaching and would perhaps lead Chelsea out as their manager one day.

“Looking forward, I’m grateful to the FA for the opportunity to study for my coaching qualifications and I look forward to pursuing the off-field opportunities that this decision opens.”

Arsenal 1-0 Newcastle: Three things we learned from the game

The Gunners have been in need of a win in recent weeks as their last three games, against Manchester United, Southampton and West Ham United, all ended with undesired results. Luckily, M...