In this feature of the Football Tactics Board as part of The Coach Series here, we will venture to explain the most-used football formation in world: the 4-4-2 formation.

The 4-4-2 formation evolved out of the 4-2-4 around the beginning of the 60s. It was first put to successful use by then England manager Alf Ramsey who experimented with it prior the 1966 World Cup. England played with the 4-4-2 throughout the whole tournament beating Argentina, Portugal and Germany in the process of winning their first and only World Cup trophy.

It took several years for the formation to spread throughout England and Italy.

The main idea of the formation is to give a team defensive cohesiveness. This is achieved by a fluid midfield-four who move forward when attacking and track back to cover for defenders when defending.

The width of formation also allows for the team to cover a big chunk of the pitch. The wide players have a similar role to the central two midfielders, moving up and down their respective sides, but could also play a role in creating chances themselves by cutting inside or crossing the ball.

What types of players are needed for the respective positions?

While the formation is simplistic and easy to understand compared some other more forward-thinking and up-to-date systems, it still requires players with specific skills and traits.

The formation frees the two forwards, for example, meaning they needn’t wait for support from their midfielders and can rush forward without it. This means that forwards who are creative and love initiative would do better in this formation.

The midfield-four are split in two: the central pair and side midfielders. The central pair is often comprised of one defensive midfielder who is used as cover when the team is attacking, and a more-attacking midfielder whose responsibilities are to support offensive plays. The side players are often very important in this formation as they serve as both wingers and full-backs depending on the playing situation. They need to be an all-around complete players but should also posses plenty of pace.

The back-four are also split in two: two centre backs and two full-backs. The outline of the centre back is pretty much the same in all formations: brave, strong, and with a good reading of the game. The full-backs provide the extra security in the 4-4-2. Their job should be made easier by the two side players in front of them. They usually stay near the half-line in offensive set-piece situations, covering in case of oppositional counter-attacks.

As with any other formation, the 4-4-2 has its weaknesses. The wide pitch- coverage for example leaves big holes of empty space for the opposition to exploit. 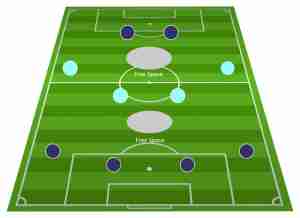 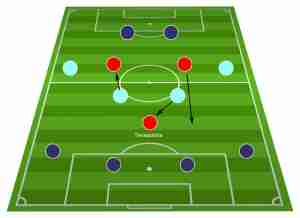 Another way to counter the 4-4-2 is to play five players in midfield: three in the centre and two on the sides. This creates a difficulty for the defensive minded player in the 4-4-2 as he would often have to play against two oppositional players. 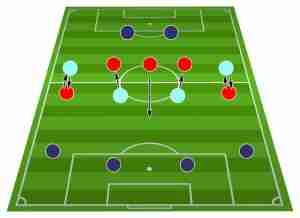 Arigo Sachi used a variation of 4-4-2, 4-4-1-1 to be precise, to drive Ac Milan to a Seria A and two European Cup triumphs. His success with the formation was down to the compact play-style his team executed as well as the presence of highly creative players in midfield and attack.

Alex Ferguson drove Manchester United to the treble in 1999 using 4-4-2. He had all the ingredients to make it work with two highly effective wingers in David Beckham and Ryan Giggs, one combative midfielder in Roy Keane and a passing maestro in Paul Scholes, and two fully-capable of working independently forwards in Dwight Yorke and Andy Cole.

Claudio Ranieri used the formation to help Leicester win their first ever Premier League title in 2016. Things looked a bit different here as Leicester preferred to play direct football rather than exercise their possession rights,  and possessed a decent poacher to finish things up front in Jamie Vardy.

If you enjoyed this article, please let us know by subscribing to our notification system and leaving a comment.

Caution casual surfers.  This post has NOTHING to do with that trashy reality TV programme of the same name.  I have no interest in the fake tans, fake boobs, fake accents and the lives o...